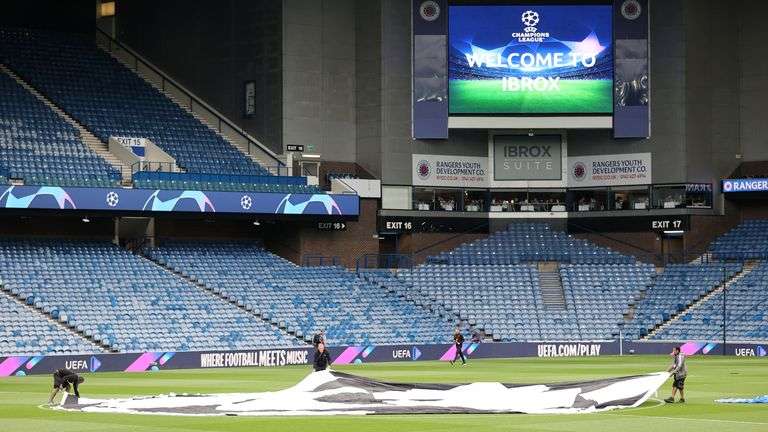 Rangers’ Champions League group stage match against Napoli has been pushed back 24 hours to Wednesday September 14 with no away supporters in attendance at Ibrox; It is expected that all UEFA matches this week will go ahead

Rangers’ Champions League group stage game at home to Napoli has been pushed back 24 hours to Wednesday following discussions between Police Scotland, the Glasgow club and UEFA.

European football’s governing body have announced that the tie at Ibrox Stadium, originally to be played on Tuesday, has been rescheduled for Wednesday, September 14 at 8pm.

A UEFA statement explained: “This is due to the severe limitations on police resources and organisational issues related to the ongoing events surrounding the national mourning for Her Majesty Queen Elizabeth II.”

The UEFA Youth League game between both teams originally set for Tuesday has also been moved to a 2pm kick-off on Wednesday.

UEFA have also announced that no away fans will be present at Ibrox this week and, as a matter of sporting fairness, Rangers’ supporters will not be authorised for the return leg in Naples on October 26.

Fans have been strongly advised to avoid making travel arrangements and to respect this extraordinary situation.

Rangers started their Champions League Group A campaign with a 4-0 defeat at Ajax Amsterdam and Napoli thrashed Liverpool 4-1 at home.

All UEFA competition matches are expected to go ahead as planned next week across Tuesday, Wednesday and Thursday.

All Premier League and English Football League matches this weekend were postponed as a mark of respect. All games in the Women’s Super League, Women’s Championship and Women’s FA Cup were also postponed.

The Scottish Football Association announced the postponement of all professional games over the course of the weekend, while all football in Northern Ireland and Wales was also off.

The English Football League is set to recommence on Tuesday with a full midweek programme while the National League confirmed matches would go ahead as scheduled from Monday.

The National Police Chief’s Council said in a statement that a national policing operation had been activated and that UK Policing was working closely with other organisations to ensure events are held “safely and with the appropriate security”.

The NPCC added: “Following the decisions of the Premier League and English Football League to cancel this weekend’s matches, we will work with football clubs to try and ensure that, where possible, football fixtures can take place safely when balanced against the requirement to support national events and deliver day to day policing.

“This is a unique situation and we are working closely with everyone involved.”

Tottenham have moved to clarify that their Champions League group stage game against Sporting CP this week in Lisbon is going ahead as scheduled (Tuesday September 13, kick-off 5.45pm).

The tie had been thrown into doubt after a technical glitch on the club’s website suggested the game had been postponed.

Tottenham and Sporting both won their opening fixtures in Group D games against Marseille and Eintracht Frankfurt respectively.

Sporting cruised to a 3-0 win at Frankfurt, with English forward Marcus Edwards breaking the deadlock midway through the second half before former Wolves winger Francisco Trincao and Nuno Santos secured three points.