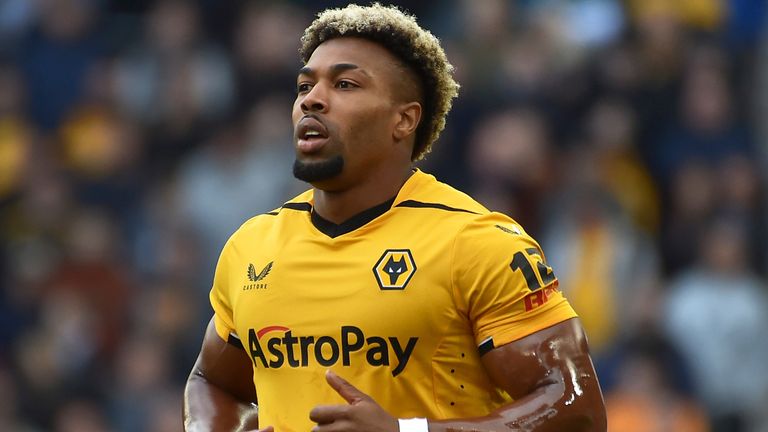 That is the message from a confident Adama Traore, delivered with a wry smile.

Traore has had a challenging season. The Wolves winger has only managed to make six starts but there is good reason for that.

Traore hardly played in pre-season due to injury and then found it difficult to get into the side under previous Wolves boss Bruno Lage when he regained his fitness.

“It was kind of frustrating, my injury did take a bit longer. I felt pain and I wasn’t comfortable and this was the situation, this is football and you have to make yourself stronger, I’m all good now,” Traore told Sky Sports News.

“You can always get better, this is the mentality I have every day. Working on myself every day and being better than yesterday.”

Traore is out of contract this summer, something Julen Lopetegui has been asked about numerous times since he became the Wolves boss.

It is a decision that will be close to the hearts of many Wolves fans, as they’ve seen this cult hero go on to make over 150 appearances for the club since his arrival in 2018.

So the question on the lips of many in Wolverhampton – will he stay?

“I think everyone has been asking about my contract,” Traore said. “For me, right now, it is important to help the team grow and after we’ll see what will happen.”

With the transfer window open, Traore’s future continues to be under constant speculation and he explains how some players may find the attention difficult to cope with.

“The fans don’t see the situation, the pressure and the things behind the scenes. They see what is going on social media, sometimes it’s fake,” Traore said.

“The most important thing for the fans is to understand what’s in the media is not true, sometimes you have to listen to the player.

“Players take pressure differently, for me it’s part of my job, I enjoy being a football player and I work hard to be on the pitch and enjoy the game.

“The contract thing – it will depend on the club, the club have to talk to me and we’re going to talk and we’ll see what happens…”

Lopetegui and a spell in Barcelona

During his spell with Barcelona last year, Traore came up against Lopetegui while he was at Sevilla – so how has he found his current boss?

“He’s good. He transmits a message to the team to be focused in every aspect of the game. We have confidence in what he’s doing, that’s the most important thing.” Traore said.

“I think the mentality is important, when someone you working under believes in the things he does, it has an impact on the players on the pitch. We’re showing the belief in his work and that’s the most important thing.”

In January 2022, in perhaps a surprise move, Traore went back on loan to his hometown club Barcelona, a side he first joined when he was just eight years old.

It was an experience he clearly enjoyed but also learned from.

“I learned a lot, the way they prepare for the game, the mindset, how they are inside the dressing room… I learned from many of them, (Sergio) Busquets, (Dani) Alves – they all impressed me.”

Traore’s team-mates, coaches and the Wolves fans will all be hoping he can apply what he learned during his time at Barcelona to help them escape relegation this season – but does he think they can do it?

“I love the fans, to be honest, they always support me and I will give it back by staying in the Premier League.”