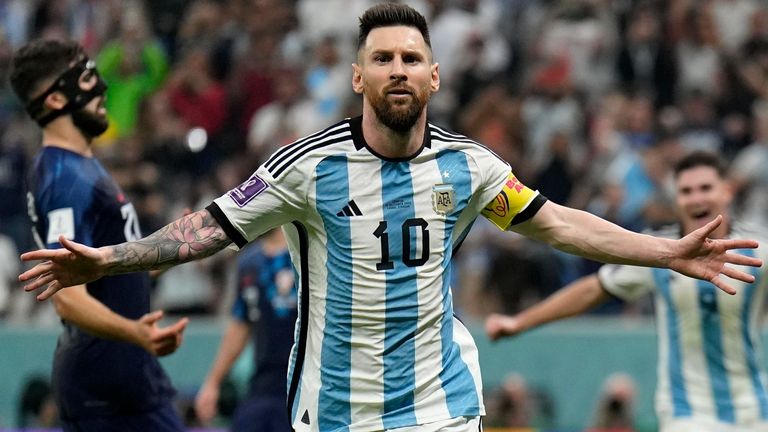 Andriy Shevchenko says Lionel Messi is the best player there has ever been and it would be a fitting finale to his career if he were to lift the World Cup on Sunday.

In an exclusive interview, the former Ballon d’Or winner also backed Harry Kane to bounce back quickly from his missed penalty in England’s quarter-final defeat to France, saying – like Kane – he knows how it feels to carry the weight of a nation on your shoulders.

Shevchenko has recently returned from Ukraine, where he has been lobbying for greater humanitarian support for the people suffering in his homeland. He says he is concerned the war with Russia is slipping down the news agenda in the west.

Shevchenko is now in Doha as a guest of FIFA and will be at the Lusail Stadium on Sunday afternoon for the World Cup final between Argentina and France. He says it would complete the “fairytale” if it were Messi lifting the trophy at the end.

“Messi is the symbol of Argentina,” said Shevchenko. “A legend – one of the best of all time. You put him with [Diego] Maradona and Pele. A player like him deserves to win the World Cup.

“It’s going to be a great story – not just what he has done in his career but how he is playing right now. He is an absolute leader, playing great games, scoring good goals, making the passes for his partners. He is a real leader and captain.

“Messi, his time is starting to come down, but Mbappe is a new star. Kylian has already won the World Cup. It’s going to be a very exciting and interesting game.”

Asked whether he thinks Messi is the best ever, the former AC Milan and Chelsea forward replied: “For me, yes. It is a different timing, Pele and Maradona, but Messi is all of that.”

As for the England captain, Shevchenko is confident Kane will recover from his disappointment against France because he has such strong mental resolve.

It’s a trait the former Ukraine captain had to learn himself, when his country relied on him as the talisman of the national team, for whom he won 111 caps.

“For me, he is one of the strongest strikers in the history of England,” Shevchenko said about Kane. “He is going to come back strong.

“It is a lot of responsibility. I think first of all, he played a great World Cup. He came out like a leader, scored that first penalty, took that responsibility.

“He missed the second but it is a part of the game. He took a lot on himself.

“Incredible player – all his numbers and performances. I am going to give him all my support because I have been in that situation and I know what it means.”

Shevchenko is adamant England fans should be proud of their team’s performances in Qatar and believes it won’t be long before the men’s team once again wins a major tournament.

“You just have to keep believing,” he says. “The results are going to come.”

While in Doha, Shevchenko is still holding meetings with influential politicians from around the world, campaigning for more support for the Ukrainian people after Russia’s invasion.

Shevchenko was in Kyiv a fortnight ago, when he met with Ukrainian president Volodymyr Zelensky, appealing to aid agencies and western governments for more electric generators to reduce the number of blackouts in the country.

Russian forces have targeted civilian utilities in many Ukrainian cities in recent weeks to try to break their resistance. Shevchenko says that won’t work.

“The spirit is incredible, even in such a difficult situation,” he says. “People collaborate. I think there is a strength in Ukraine, an unbreakable mind. We don’t have any choice.

“For us, the last choice is to just give up and then everything is finished for Ukraine. We have a very clear objective – we are fighting for our land, for our future and this is a really united people.”

Shevchenko says he came close to being hit by a huge Russian drone strike himself in Kyiv at the end of last month.

“Yeah, I was very close to one,” he explains. “About 2km from the strike. One of the electric central generators (was hit) like we all know the Russians are trying to hit the critical infrastructure. The feeling (from the explosion) was very strong.”

Asked how frightening it was for him and his fellow Ukrainians, Shevchenko calmly replied: “When I move to the war zone I know this could happen.

“It is an incredible feeling when you go there. The people are suffering but they are very united. We know what we have to do, we know how to survive, we know we have to be united together.

“When the electricity comes back in some places, you call your friends and invite them to the house, take a shower, share some food. This is what the people do, just co-operate to try to help each other.

“While I was there, there was a Zoom call between the US ambassador and (world boxing champion Oleksandr) Usyk was there too, and we were discussing how in this situation we can help the Ukrainian people.

“We start this new project now to raise funds for the people who need electric generators. The most important is the critical infrastructure like hospitals, field hospitals, operations for children, for soldiers, to give them all the chance to save the lives of the people.”