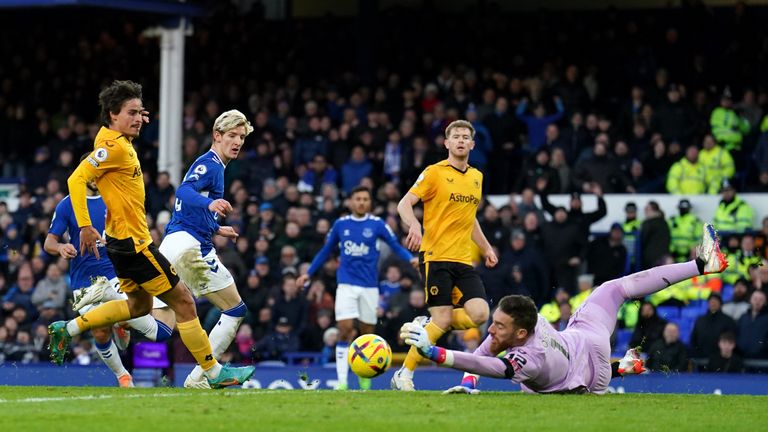 Although not a like-for-like replacement for the departed striker Chris Wood, Newcastle see Anthony Gordon as a player who can operate in a number of positions across the front line; it is thought a bid of around £40m could tempt Everton to sell

Newcastle have held talks over a move for Everton forward Anthony Gordon.

The Magpies are looking to replace striker Chris Wood, who left for Nottingham Forest last week.

Although not a like-for-like replacement, Newcastle see 21-year-old Gordon as a player who can operate in a number of positions across the front line.

Newcastle were rebuffed with an inquiry for Gordon in the summer, but have retained an interest.

It is thought a bid of around £40m could tempt Everton to sell. Gordon was not present at Everton’s Finch Farm training ground on Tuesday but it is not clear if his absence was related to Newcastle’s interest.

Gordon would be open to leaving Goodison Park

Complicating the move somewhat is Everton’s managerial situation – Frank Lampard was sacked on Monday and any new incumbent may want to keep Gordon.

He was then seen as one of Thomas Tuchel’s top targets and Chelsea were prepared to pay £60m to bring him to Stamford Bridge.

Gordon has 18 months remaining on his current contract at Goodison Park.

The news on Gordon comes after Tottenham made a late bid to sign Villarreal forward Arnaut Danjuma on loan until the end of the season.

Danjuma had been expected to sign for Everton on a similar deal after an agreement was reached at the weekend but Spurs appear to have hijacked the move.

The addition of the versatile Netherlands forward would boost Tottenham’s options in attack with Son Heung-min, Dejan Kulusevski, Richarlison and Lucas Moura all experiencing injury issues this season.

Danjuma, who will turn 26 later this month, spent two years playing in England with Bournemouth and while he starred in the Sky Bet Championship, he struggled in the Premier League and failed to score in 14 top-flight appearances.

A switch to Villarreal in 2021 proved successful with Danjuma playing a key role in their run to the Champions League semi-finals, scoring 16 goals in all competitions for the La Liga outfit.

Opportunities have been more limited for Danjuma this season after a muscle problem disrupted the early part of his campaign and a return to England is close to being finalised but with Tottenham now set to be his new destination.

Everton have made former Leeds boss Marcelo Bielsa their first choice to become the club’s next manager after sacking Frank Lampard on Monday. Former Southampton manager Ralph Hasenhuttl is also being considered for the vacant job.

Bielsa, who has been out of work since he left Leeds in February last year, has already held talks with the club’s hierarchy about taking over and has indicated his willingness to take on the job. The Toffees’ next game is not until February 4, when Arsenal visit Goodison Park.

The Argentine was in talks to succeed Scott Parker as Bournemouth manager before the World Cup, but the role was ultimately given to caretaker boss Gary O’Neil instead.

The Toffees’ approach to Bielsa follows their dismissal of Lampard on Monday afternoon, on the back of a 2-0 defeat by West Ham at the London Stadium on Saturday – their third consecutive loss in the league.

The former Chelsea boss arrived at Goodison Park in January 2022, and although he helped the club avoid the drop last season, he leaves Everton with 15 points from 20 games and three wins this term – the worst victory record in the division. Everton are 19th in the table, with only Southampton below them on goal difference.

Jamie Carragher still believes Everton are the worst-run club in the country and said the hierarchy have “demonised the whole fanbase” in recent weeks.

Everton sacked Lampard after less than a year in charge on Monday.

Lampard’s dismissal follows Everton owner Farhad Moshiri attending his first match since October 2021 as the Toffees succumbed to defeat at West Ham – their third consecutive loss in the league.

Who will be on the move this winter? The January transfer window opens on Sunday January 1, 2023 and closes at 11pm on Tuesday January 31, 2023.