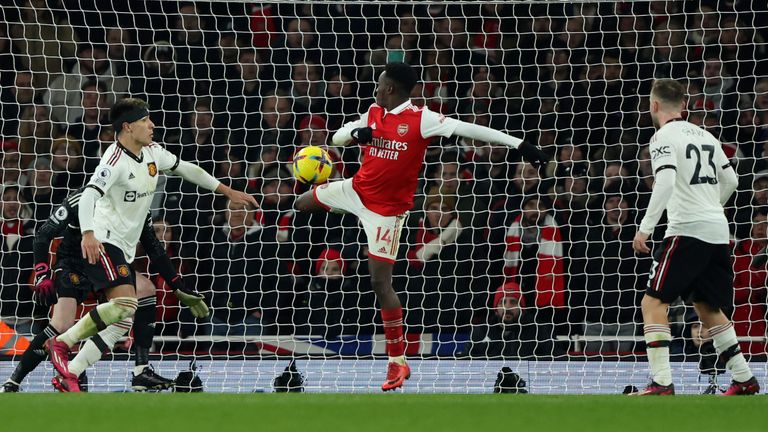 Marcus Rashford gave United an early lead with a brilliant run and strike, the forward’s ninth goal in nine games in all competitions since the World Cup finished – the most of any player in Europe’s big five leagues.

However, Arsenal soon levelled through Nketiah, whose powerful close-range header made it 18 goals in his last 26 starts for the club, an impressive run that includes 12 goals in his last 13 starts at the Emirates.

Mikel Arteta’s side went ahead for the first time thanks to Bukayo Saka’s fizzing drive from distance eight minutes into the second half.

But United were back on level terms six minutes later as Lisandro Martinez scored his first goal for United, the Argentina World Cup winner taking advantage of Aaron Ramsdale’s mistake to float a header into the net.

But there was late, late drama as Nketiah touched home Martin Odegaard’s mishit shot and, after a tense check for offside by the Video Assistant Referee, the roof came off the Emirates.

As a result, Arsenal restore their five-point lead over second-placed City, who had beaten Wolves 3-0 earlier in the day, while United remain fourth in the table and now lie 11 points off the leaders, who also have a game in hand on their title rivals.

Man of the match: Bukayo Saka

This was a battle of the Premier League’s two most in-form teams and it showed in what was a pulsating contest in the capital that was a throwback to some of the fierce title meetings these arch-rivals used to have on a regular basis in the late 1990s and early 2000s.

United, missing the experience of key Brazil holding midfielder Casemiro through suspension, were put under immense early pressure by the league leaders, only to weather it and then open the scoring after 17 minutes.

The home team carelessly lost the ball, allowing Rashford to pick up possession midway inside the hosts’ half and the England forward nutmegged Thomas Partey before then finding the bottom lefthand corner of the net with a bullet of a 25-yard drive.

It was as you were for Mikel Arteta as he named the same starting XI that won at Spurs. The only change came on the bench, where new signing Leandro Trossard was among the substitutes.

Scott McTominay was the man charged with replacing the suspended Casemiro in the Manchester United midfield – that is the only change from the 1-1 draw with Crystal Palace.

But that lead lasted all of seven minutes as Arsenal tore into their opponents, levelling matters with a sublime goal as Granit Xhaka’s gorgeous left-wing centre was headed home by another in-form England forward, Nketiah, unmarked at the far post.

The first 45 minutes flew by, with both sides going close to re-taking the lead, but it was the Gunners who struck next to send the Emirates wild as Saka cut in from the right in the 53rd minute before arrowing a low drive into the far corner of the net past David de Gea’s outstretched hand.

Back came the visitors, though, in this thrilling end-to-end contest, with the normally reliable Ramsdale at fault as the goalkeeper palmed a corner straight to Martinez and the defender somehow managed to loop a header over Gabriel on the line and into the net.

The home team, who handed Leandro Trossard a second-half debut, pushed hard for a winner in the final quarter, but a combination of the outside of the post, which denied Saka a second, and the brilliance of De Gea initially kept them at bay, until Nketiah’s late intervention in one of the games of the season.

Man of the Match – Bukayo Saka

Next up for Premier League leaders Arsenal is a FA Cup fourth-round trip to title rivals Manchester City on Friday, kick-off 8pm.

The Gunners return to Premier League action away to Everton on February 4, kick-off 12.30pm. Mikel Arteta’s side then have two home games, against Brentford and Man City, before two away trips to Aston Villa and Leicester end their February schedule.

United will need to put their league thoughts on pause, as they have three cup games within the next 10 days.

Erik ten Hag’s side then turn their attention to their FA Cup fourth-round tie, as they host Championship side Reading on Saturday, kick-off 8pm. United then play Forest in the return leg of their cup semi-final on the following Wednesday.

United’s next league game is a home match against Crystal Palace on February 4, kick-off 3pm.