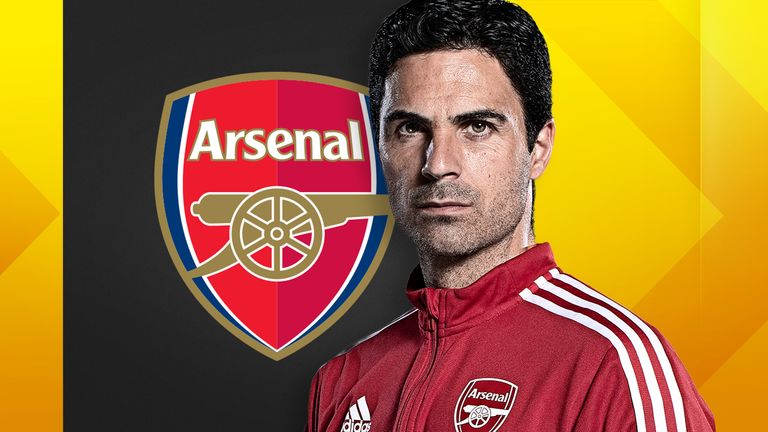 “It’s the way Arsenal are playing and the age of the squad they’ve got right now that is contributing to this. If you look at the front four against Brighton – Saka, Nketiah, Martinelli and Odegaard – the oldest of that front four is Odegaard at 24.

“This has become very quickly under Mikel Arteta one of the absolute prime destinations for top talented young players and when you look across the game, who Arsenal are targeting and what the appeal the club might hold for some of these players, it is hard to think of a more enticing project right now.

“We all know they want to sign Mykhailo Mudryk and it seems pretty clear from his social media activity at the very least that he is keen on joining Arsenal. That paints a picture of its own as this is a place now where talent goes to thrive when only a few years ago it struggled.

“The philosophy Arteta has instilled has made joining Arsenal a very attractive proposition. It’s absolutely a possibility that Mudryk won’t join this month as Shakhtar want so much for him. There is a big gap in the valuation.

“Arsenal are trying to drive that price down. The longer the window goes on, the more Mudryk is angling that he wants to go, the feeling is that it will happen but it is not a done deal as Arsenal have walked away in the past when the price is too big. It is clear he is the man Arsenal want and it is clear that he wants them too.”

Shakhtar Donetsk winger Mykhailo Mudryk posted another image of him watching Arsenal ahead of the January transfer window, whilst describing Mikel Arteta as a “top coach”.

Mudryk watched the Gunners’ win over West Ham on Boxing Day and, on New Year’s Eve, posted an image on his Instagram story of him watching the club’s 4-2 win over Brighton.

Mudryk said both Arteta and Roberto de Zerbi, who he worked with at Shakhtar, were “two top” coaches.

“Negotiations are continuing,” Palkin told the club website. “We receive offers but they are not the ones we would like to see on our table.

Arsenal wanted to strengthen their forward line in the summer and went in for Raphinha, who moved from Leeds to Barcelona in a £55m deal.

The potential signing of Mudryk is seen as ideal, with the Ukraine international being someone Arsenal have scouted for a while.

Mudryk is not, however, seen as a direct replacement for Gabriel Jesus, who is expected back before the end of the season from the knee injury he suffered playing with Brazil at the World Cup.

Mudryk has scored 10 goals this season for Shakhtar, including three in the Champions League group stages.

“Mykhailo Mudryk has been teasing Arsenal fans by watching the side in action. He’s probably one of the most exciting wingers in European football and has the potential to go right to the very top.

“He’s a 21-year-old Ukrainian international and Arsenal are continuing their dialogue with Shakhtar Donetsk.

“There have been some reports that their initial offer has been rejected. There is a gap between what Arsenal are willing to pay and what Shakhtar are willing to receive. They are discussing the structure of the deal.

“The player is keen on the move which makes Arsenal a lot more comfortable with the situation.”

Arteta vows Arsenal will be ‘active’

Arsenal boss Mikel Arteta says the club are looking to be “active” in the January transfer window.

The club have lost striker Gabriel Jesus from an already slim squad due to a knee injury suffered at the World Cup and failed in a bid to sign midfielder Douglas Luiz on the final day of the summer window.

“We are going to be active and active means we are looking to strengthen the team,” said Arteta.

“This squad still doesn’t have the luxury of not maximising every single window. We have to do that because it’s really important. But then we have to get the right profile, it has to be the right player to take us to the next level.”

Mykhailo Mudryk – Arsenal have made an improved offer for Ukraine winger Mykhailo Mudryk, their top transfer target this month, as negotiations intensify with Shakhtar Donetsk (Daily Telegraph, January 2); Mudryk has reportedly agreed personal terms on a proposed transfer to Arsenal as the forward edges closer to a move to Emirates Stadium (Daily Mirror, January 2); Arsenal are to make an improved offer for Shakhtar Donetsk winger Mudryk this week (Mail on Sunday, January 1); Arsenal are considering making Shakhtar Donetsk an improved offer for Mudryk after seeing a £45m bid rejected (The Times, December 30); Shakhtar have confirmed they are willing to sell Mudryk to Arsenal in January (Daily Telegraph, December 30); Arsenal want Shakhtar to set a more realistic asking price for transfer target Mudryk (The Sun, December 29).

Joao Felix – Manchester United and Arsenal are the frontrunners to sign Atletico Madrid forward Joao Felix in January (Daily Express, January 2); Joao Felix has Premier League interest but the €21m price is a stumbling block for any loan move (The Athletic, January 2); Manchester United, Arsenal and Chelsea are all reportedly reconsidering their pursuit of forward Felix due to how much it will cost to sign him on loan for six months (Daily Express, December 29); Man Utd and Arsenal have been told Atletico will allow Felix to leave the club on loan in January as long as his half-season FFP cost of around £8m is paid as a fee (Daily Record, December 24).

Ibrahima Bamba – Arsenal could be facing a battle to sign Italian youngster Bamba, who currently plays in Portugal for Vitoria Guimaraes, with PSG, Club Brugge and Atalanta also interested in the 20-year-old (Daily Mirror, December 27).

Ferran Torres – Arsenal are set to rekindle their interest in Barcelona forward Torres after missing out on an audacious bid to sign him over the summer (Daily Mirror, December 12).