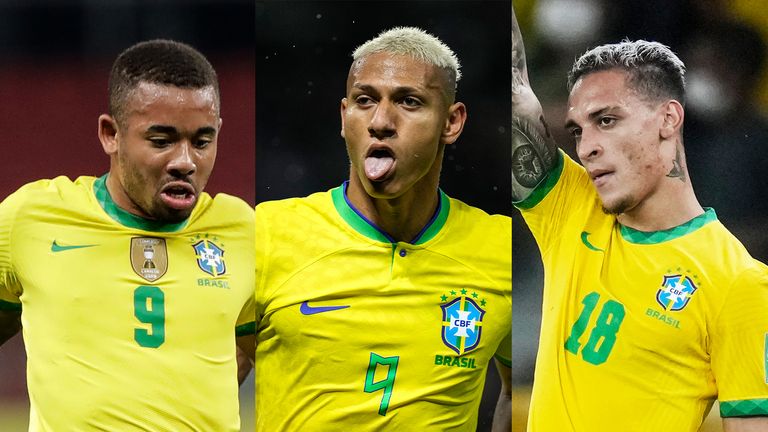 Arsenal’s Gabriel Martinelli has been picked for Brazil’s 26-man World Cup squad; Roberto Firmino is left out but Gabriel Jesus, Richarlison and Antony are selected; Brazil play Serbia, Switzerland and Cameroon as the five-time World Cup winners begin their campaign on November 24

Gabriel Jesus, Richarlison and Antony have all been named in the Brazil squad for the World Cup

Arsenal forwards Gabriel Martinelli and Gabriel Jesus have been named in Brazil’s 26-man squad for the World Cup while Liverpool’s Roberto Firmino has been left out.

Selecao coach Tite named his 26-man squad for the Qatar tournament on Monday evening, which also included Tottenham’s Richarlison and Manchester United’s Antony, but Firmino was the most noticeable absentee with Martinelli, who only has three caps for his country, preferred.

Jesus, like his Arsenal team-mate, had not featured in a Brazil squad since the summer but has been recalled to Tite’s World Cup selection, which consists of a near all-Premier League midfield with Manchester United duo Casemiro and Fred called up alongside Newcastle’s Bruno Guimaraes, Fabinho of Liverpool and West Ham’s Lucas Paqueta.

Premier League goalkeepers Alisson and Ederson have also been selected with captain Thiago Silva of Chelsea also in the 26-man squad.

There is also a call-up for 39-year-old Dani Alves who currently plays for Mexican side PUMAS, but Arsenal defender Gabriel, who scored for the Gunners in their 1-0 win at Chelsea on Sunday, has been left out.

Firmino is one of four players called up to Brazil’s penultimate squad for the World Cup in September to not be selected for Qatar, the others being Nottingham Forest full-back Renan Lodi, Roma defender Roban Ibanez and Atletico Madrid’s Matheus Cunha.

Meanwhile, Brazil were unable to call up Aston Villa’s Phillipe Coutinho after the midfielder suffered a thigh injury that will keep him out of the entire tournament.

Manchester United winger Antony posted a video of him celebrating his World Cup call-up with his nearest and dearest, as the 22-year-old prepares to head to his first World Cup.

The winger captioned the video: “For you!!! Thank you, God!! Thank you everyone… friends, family, mom, dad, brothers!! Love you!!! Too much emotion!!”

Footage of Newcastle midfielder Guimaraes celebrating in a similar fashion also appeared on social media on Monday afternoon, with the 24-year-old sharing the moment with his family and friends.

‘Martinelli has forced his way in, but risky not taking Firmino’

“Gabriel Jesus was always in, while Gabriel Martinelli has given the coach sleepless nights. I was with the coach two or three weeks ago, after Arsenal had beaten Liverpool, and Martinelli, in the coach’s words, was the best player on the field.

“A month or so ago, I don’t think Martinelli was in the squad, but he has forced his way in through sheer week-after-week excellence for Arsenal. It has been a very difficult decision. How are you going to get him in? There were two ways.

“One was to only pick one right-back and not take Dani Alves, who is now 39. That’s the thing that is getting most of the headlines over here, that Alves – now in Mexico, without a lot of football behind him – is still included. They could have left him out, used Eder Militao at centre-back to cover the right-back position and opened up a space for a striker.

“They chose not to do that, but the fella who has been left out is Roberto Firmino of Liverpool. Brazil are taking a little bit of a risk here. Martinelli is a wide striker and Brazil have more wide strikers than they know what to do with. What they don’t have is a straight replacement for Neymar.

“They won both of their recent friendlies very well, but he picked up yellow cards in both of those games. If he does that in a World Cup, he’s suspended.

“They don’t have an obvious replacement for him in that false nine position. Firmino was their man, but they’ve decided to leave him out. That heaps responsibility on young Rodrygo to step into that role if needed.

“It’s not a surprise Richarlison is in the squad. He’s scored seven goals in his last six games for Brazil – he is their penalty area finisher. They have got plenty of players to build up the play; they need someone to finish in the penalty area and he has been the man.

“There was real worry when he limped off earlier this month, but Brazil’s doctor came over, had a look, and they are very confident he’s going to be firing on all cylinders come November 24.”