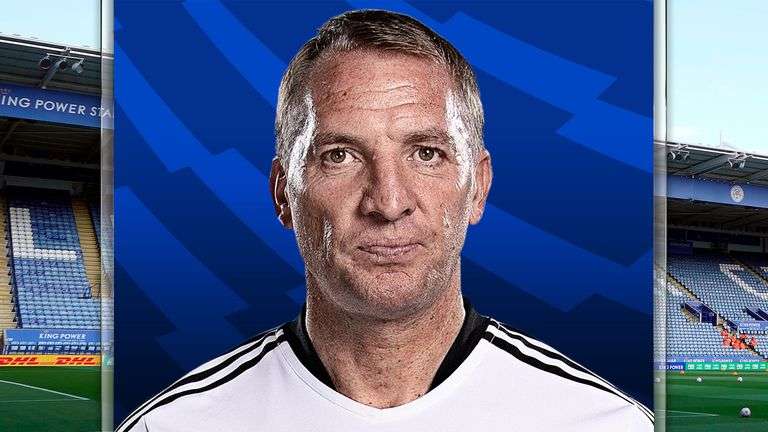 If he is feeling the pressure, then Brendan Rodgers certainly isn’t letting it show.

The Foxes are bottom of the Premier League with only a point to show for their first six games, and next up it is Tottenham away, live on Sky Sports.

Having managed two of the most iconic clubs in the world in Liverpool and Celtic, Rodgers has lived and breathed these high-stakes moments before, but after a start to the season he describes as “disappointing”, and a summer he called “chaotic”, he concedes this is the most-challenging period of his managerial career.

“It is, in terms of results, it would be absolutely. It has been a poor start that is the reality, and we should have more than the point we have got,” he exclusively told Sky Sports.

But Rodgers is also adamant he’s got what is needed to block out the noise and turn Leicester’s form around and has the “experience to deal with it”.

He may have to dig into those reserves over the next few weeks. We talk about the latest defeat 5-2 to Brighton after Leicester had taken the lead inside the first minute. You would expect a downbeat post-match interview, but I put it to him that this was the flattest I can remember seeing him.

“Probably, yes,” he admitted, “I was just frustrated with the performance and the result.” In the past he might have dwelled on the situation for too long, but he gives himself 24 hours.

“Experience allows me to get over it much quicker because in football you know that a good day can be just around the corner. It is perspective when you are at the beginning and it is new, you don’t think there are good days around the corner.

“I analyse, but my job is to pick up the players and get that spirit and that quality back again and into the training and that’s what we’ve seen in training, it’s been excellent, and we want to bring that into our next game.”

Rodgers’ sacking at Reading, time at Swansea and, of course, the life and football experiences in Liverpool and Glasgow means he says he sees his current situation differently.

“I will do my very best, I’ve got another contract here for this year and another couple of years and I want to see that through and for that I know we need to fight, and we need to be our very best,” he added. “That is all you can do.

“Experience allows you to see things differently and it means your responses are much calmer.”

The last week and the passing of the Queen has also provided Rodgers with added perspective.

“When the news came through, we were here at the training ground and it’s especially sad. I think everyone recognised what the Queen has given to the country, and I think people saw her as a sort of grandmother figure. I think it’s been very fitting the tributes throughout the country.”

Leicester’s game against Aston Villa was postponed as the Premier League paid tribute. Rodgers continued: “It was one of those tough decisions; should the games have been off or on?

“It was never right or wrong, it was just a feeling and the feeling was not to have football and pay our respects. With our game off we had a practice game on Saturday morning then the players had a few days off to spend time with their families. It was important to re-focus the priorities.

“We suffer but not in the real sense, we want to win games for the supporters, for us to feel good. But I have been around enough people a lot worse off, who suffered properly. Now we move on, onto the next game and we just look to focus and look to bring our best and get a performance.”

Rodgers has called for bravery from his team as the club look to find that performance. What the Leicester manager knows only too well from more than a decade in management is that requires confidence, something he admits is in short supply.

“I think finding confidence even when you are winning is difficult, when you have lost a few, it’s even harder. We have looked a few times like we would get over the line, then we haven’t and it is a spiral. You have to break that cycle and that is so important but to do that we have to play to our strength.

“Since I have been here we have been consistently playing well, our game has been about denying space, putting pressure on teams and creating opportunities and looking after the ball to create opportunities so if that is the best version of what we want to be, that is where we need to get to.

“Naturally, when you are winning games it’s easier but when you aren’t you have to push yourself. It is that hard work and aggression that will bring back the confidence and [gives us a] much better chance to succeed.”

This summer Rodgers hoped for a squad “refresh”. What he actually got was described as a “chaotic” few months amid the exit of one of their stars, Wesley Fofana, late in the window. The Leicester manager didn’t hold back with his frustrations towards the club’s owners, saying “we needed help” and the club “isn’t the club it once was.”

Rodgers has not been shy of speaking his mind. Back in February after a heavy loss to Nottingham Forest in the FA Cup he accused some of the players of lacking “hunger” and that some “may have achieved everything they can.” The very same players who are still at Leicester.

If you were a player at the club this summer, I ask, and you heard that the manager was looking to change the squad, how might that make you feel? Could that also impact the confidence knowing that you were perhaps not first choice?

“The players will tell you they need that freshness,” Rodgers replied.” I remember talking to Sir Alex [Ferguson] about it and he did it with a winning team. A few times he won three titles in a row and couldn’t do the fourth then he began to revitalise his squad ever year.

“If you need to do that in a winning team then naturally you would look to do it with other teams. If you want to be a top player you have to be competitive so need to have competition, that is what most players respond to and that’s what the best do.”

Under Rodgers, that group have achieved two fifth-place Premier League finishes and an historic FA Cup victory in 2021. Rodgers and many of the fans’ frustration is that the club weren’t able to push on from there.

“I hope those times comes again – a club needs constant improvement,” he continued. “The immediate future is focusing on getting the players winning consistently. It was a huge challenge for Leicester to disrupt the top six and to sustain it is very, very difficult, to build on success at a club that doesn’t have resources.”

It is a different picture now. I ask him: Is this what you signed up for? “I came here to push the club forward to challenge and will always have the ambition to do that, we haven’t made the start we wanted, we know we need to develop and improve the squad, and until that happens, I need to improve the ones we have here and get that confidence back.”

That, he hopes, will begin at Tottenham on Saturday evening.