Brentford 2-2 Tottenham: Harry Kane leads Spurs fightback as Antonio Conte’s side come back from two down in dramatic encounter 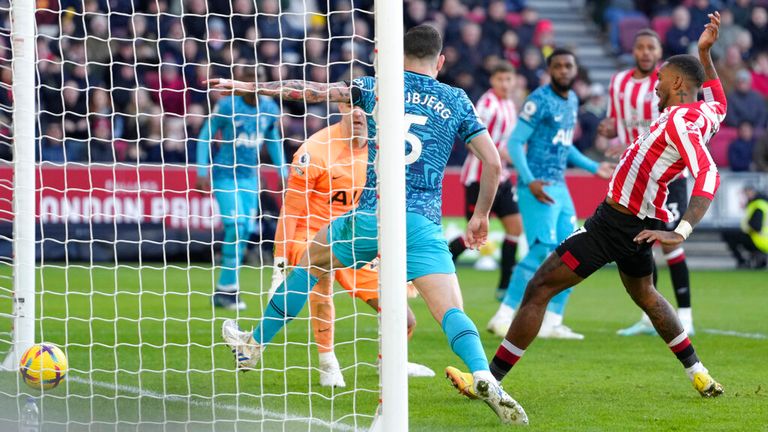 Free highlights and match report as Harry Kane led Tottenham’s fightback to draw at Brentford; Vitaly Janelt and Ivan Toney put the Bees 2-0 up with goals in both halves, Kane’s goal back was followed by Pierre-Emile Hojbjerg’s strike six minutes later

Harry Kane and Ivan Toney both scored after a difficult few weeks for the pair as Brentford and Tottenham shared the points in a dramatic 2-2 thriller to welcome back Premier League football after the World Cup.

Kane led the Spurs fightback from 2-0 down in his first match since his World Cup quarter-final penalty miss for England, heading home from close range before Pierre-Emile Hojbjerg completed the comeback as Antonio Conte’s side scored twice in six minutes.

Vitaly Janelt had made Spurs pay for another slow start by putting the hosts in front on 15 minutes, while Toney – playing in his first game since his FA charge for 262 alleged betting breaches – doubled the Bees’ advantage just after half-time.

Toney put Brentford 2-0 up against Spurs

But there was VAR controversy before Brentford’s second goal as Kane was denied what looked like a clear spot-kick for a hug by Ben Mee, who had two hands on the Spurs forward.

A frantic final 10 minutes saw Kane hit the bar and Toney miss from six yards out as Premier League football reminded fans of its drama and value just 90 minutes into its return.

After the game, both managers praised the quality on show just one game back after the four-week World Cup break.

“What a game to reopen the Premier League, what an advert for the league!” said Thomas Frank. “It’s not the first time they’ve watched Tottenham and it’s another exciting game,” added Antonio Conte.

How Spurs produced another stunning comeback

Conte was without World Cup finalists Cristian Romero and Hugo Lloris for this Boxing Day clash, so Japhet Tanganga and Fraser Forster came into the team for their first Premier League minutes since January and May respectively.

With Spurs coming into the game having conceded in their last eight competitive matches, it was no surprise to see their makeshift defence struggle and start slowly.

Brentford put the pressure on from the off, forcing Forster and co into wayward passes and, while Kane had the first shot of the game when his free-kick hit the wall, Brentford eventually made their pressure count after 15 minutes.

Toney flicked on to Bryan Mbeumo down the left, and his cross was met by Mathias Jensen’s first-time volley. A deflection off Clement Lenglet meant Forster could only palm the effort to the onrushing, unmarked Janelt, who could not miss.

Tottenham suddenly woke up after being pegged back with Heung-Min Son and Dejan Kulusevski testing David Raya’s palms on three separate occasions, but they were easy efforts for the Brentford goalkeeper.

At the other end, Zanka picked up a loose ball from a dangerous Brentford throw-in but his near-post effort was well saved by Forster at the near post.

Brentford thought they had a second goal when Toney burst through after Yves Bissouma gave away possession in the centre circle and rounded Forster to tap home. But the Bees striker was rightly flagged for offside.

Tottenham came out after half-time in a much more positive mood but a controversial 60 seconds saw the game move away from them.

Son’s cross was heading towards Kane in the Brentford penalty area and the Spurs striker went down with Mee holding onto him with both hands. Both referee David Coote and VAR waved away Spurs’ complaints, before Brentford went up the other end and doubled their lead.

Eric Dier needlessly conceded a corner with a wild clearance under pressure from which Christian Norgaard flicked on and Toney was there to tap home at the near post.

It was not long until Spurs halved the deficit, with Lenglet providing a superb deep cross, which Kane nodded back into the opposite corner past the diving David Raya to maintain his 100 per cent scoring record on Boxing Day.

And yet another Tottenham comeback was complete six minutes later as Hojbjerg struck home from the edge of the box to haul Conte’s side back to parity.

What followed was a topsy-turvy affair which saw chances go begging and penalty shouts fall on deaf ears. First, Matt Doherty’s tumble in the box under Zanka’s challenge was waved away, before Mbeumo was booked for a dive while trying to round Forster.

The same Brentford forward fired over when found by Rico Henry’s cross from 12 yards, while Kane failed to connect with a bicycle kick in the six-yard area of the other box.

Toney missed a better chance moments later as Mads Roerslev headed on a deep cross to the forward standing just six yards out. The Brentford man got to the ball before Forster but could only poke over.

Stoppage time saw Son test Raya with a low drive, which the Brentford goalkeeper was equal to, but the final whistle made sure both sides were too late to find a winner.

Conte laments another slow start | ‘We need to have reflections’

Conte’s Tottenham have now conceded first for the ninth game in a row – leaving the Italian immensely frustrated at his team’s ability to give their opponents a headstart.

“On one side, I have to be happy for the reaction and the way we played in the second half. Not just because we scored two goals, but the energy, desire and intensity that we played,” he said. “On the other side, it’s nine games in a row we’ve conceded the first goal. This is not positive.”

The Spurs boss admitted his side need to be more “stable” if they want to remain in the top four places come the end of the season.

“I understand we have great character and reaction, I understand that we believe in ourselves,” he added. “At the same time, it’s important to be stable for a team who wants to stay in a good position in the table. To concede for many games the first goal, also two goals, we have to make reflections to try to find the solution.

Brentford boss Frank admitted that part of the game plan was to catch Tottenham out quickly due to their slow starts, but said Kane’s remarkable goal was a turning point in the match.

“We knew they start slowly and we went quick,” Frank said. “From our perspective, there was no talk about ‘we need to start fast’. We always start fast.

“The performance was really good again from us, in the 90 minutes, we were the ones who should have won. The momentum swung their way when Kane scored the goal.

“But if you said to me that if Lenglet is crossing from there, and Kane is scoring from there, I’d say no chance, That was a situation I’d hope we solve better.”

Analysis: The Premier League is back with a bang

The biggest reminder of why the Premier League is so popular was not the pendulum-swinging action, the VAR controversy or the personal narratives that come in games like these – but the groan from the four corners of the ground at full-time when David Coote brought matters to an end.

Nobody wanted this game to finish. This was a match where the hefty amount of stoppage time that we saw at the World Cup would have been so welcome.

The two men on centre stage before the game stepped to the fore. Kane and Toney must have felt the weight of their very different recent experiences as they lined up for kick-off. They ended it with an embrace at full-time – both players relieved to put the last few weeks behind them.

But the beauty that comes with the Premier League is that this was all so predictable. The match made sense, if you look at recent games.

Once again, Brentford made matters difficult for a top-six side at home, underlining their status as points-getters but a side who also lack consistency against the sides around them.

Ultimately, the Premier League is exactly the same as it was a month ago when it stopped for the World Cup. If the rest of the games in volume two of this exciting campaign are just as good…