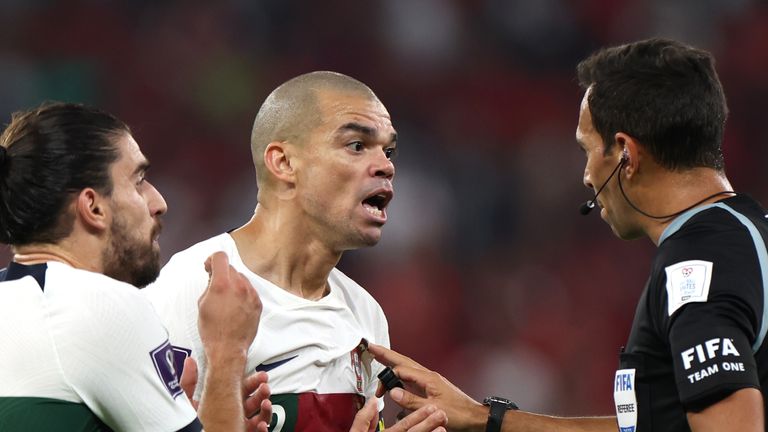 Pepe, speaking after Portugal’s loss to Morocco, said: “It’s unacceptable for an Argentine referee to officiate our game. After what happened with Messi talking, all of Argentina talking and the referee comes here.”

Pepe claims the appointment of an Argentine referee was “unacceptable”

Portugal duo Pepe and Bruno Fernandes has questioned the appointment of Argentine referee Facundo Tello after they crashed out of the World Cup to Morocco.

Pepe missed a glorious chance to level the game in added-time and his frustrations seemed to boil over in the post-match interviews as he questioned why an Argentinean referee was given the game after Argentina’s players criticised officials following their quarter-final win over the Netherlands on Friday.

He said: “I’m going to have to say it. It’s unacceptable for an Argentine referee to referee our game. After what happened yesterday, with Messi talking, all of Argentina talking and the referee comes here.

“What did we play the second half? The goalkeeper dropped to the ground. There were only eight minutes of stoppage time. We worked hard and the referee eight minutes?

“We didn’t play anything in the second half. The only team that played football was us. We are sad. We had the quality to win the World Cup and we didn’t manage to.”

Bruno Fernandes raged along the same lines, saying: “I don’t know if they’re going to give the trophy to Argentina.

“I don’t care, I’m going to say what I think and screw them. It’s very weird that a ref officiates us from a country still in the competition.

“Clearly they’ve tilted the field against us.”

“Our players are distressed,” said Portugal coach Fernando Santos, who shrugged off questions about his own future and added that he did not regret not starting Cristiano Ronaldo. The former Manchester United striker was brought on after 50 minutes but couldn’t find a way past Morocco and left the field in tears at full time.

Santos added: “Cristiano is a great player and he came on when we thought it was necessary. But no, no regrets.”

Striker En-Nesyri profited on a mistake from Portugal goalkeeper Diogo Costa to head home the historic strike for not only Walid Regragui’s side – but the entire African continent.

“Pinch me, I’m dreaming,” said Morocco goalkeeper Yassine Bounou, who has yet to concede a goal in this tournament from an opposition player.

“Morocco is ready to face anyone in the world. We have changed the mentality of the generation coming after us. They’ll know Moroccan players can create miracles.”