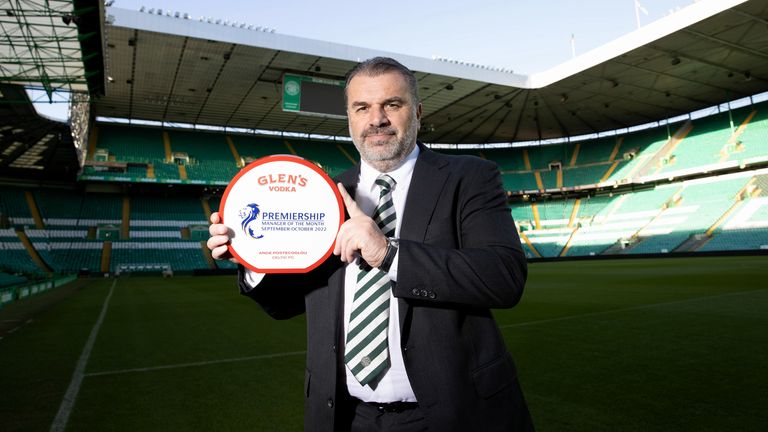 Ange Postecoglou wants his players to keep their standards high as they look for a clean sweep domestically; the Australian has been named Scottish Premiership manager of the month for September and October; Celtic host Dundee United in the Scottish Premiership on Saturday; kick-off 3pm

Ange Postecoglou has challenged his Celtic players to measure themselves against Champions League standards as they focus on domestic matters for the remainder of the campaign.

Celtic ended their Champions League group campaign with two points and a 5-1 defeat by Real Madrid on Wednesday but there was some encouragement with the way they brought their attacking style of play and created chances throughout the experience.

They now host a Dundee United side on Saturday who they beat 9-0 in August and Postecoglou was asked how he can bridge the gulf between the Scottish Premiership and Europe’s elite competition when he attended the club’s annual general meeting on Friday.

Postecoglou explained that exposing his players to the standards was the first major step and added: “Everyone’s got a plan until they get punched on the nose. Then you have to figure things out. We have taken some punches but we have exposed ourselves and measured ourselves and that will be our measure from this day onwards.”

Speaking later at a media conference, the Scottish Premiership manager of the month for September and October expressed confidence that Celtic would not be bruised by their defeat in Spain.

“To continue the analogy, I don’t think we got knocked out,” he said. “I still think we are clear-headed.

“There is no surprise in the level we faced and knowing we need to improve but as an exercise in testing ourselves and measuring ourselves, we did that. The players understand the levels required and it’s up to us to chip away at that gap.

“You have to take that sort of mentality into your domestic competition. There is no point going through what we did this year and try and address it in 12 months’ time if we qualify again, because you have wasted 12 months developing those areas.

“The idea is to take those learnings from the Champions League and put them into the Premiership and cup competitions and try and raise our level of football.

Postecoglou is sure his players have already benefited from the experience.

“Time will tell with the way the players embrace that challenge but I have seen them grow through games, even though the results don’t reflect that,” he said.

“The way they have taken on the responsibility and tried to play our football, knowing that we have still got a way to go to get to that level, I have already seen growth in them, and in the domestic league as well – our performances there have been excellent.

“The amount of goals we are scoring and the chances we are creating is because we are taking the lessons learned through the Champions League into the domestic game.

“I’m hoping they understand there is a level of trust and security around that I won’t expose them and sell them out if we have a night like we did the other night when we concede five goals.

“I love the spirit they have shown, I love the way they have embraced the challenge. It’s not easy to do.

“There was probably an easier out for us to take, not that it would have guaranteed us better results. But if we played more conservative, were less open and aggressive in our approach, maybe we wouldn’t have lost the last game by such a margin.

“But in the other games we weren’t blown away by anyone and they took comfort and belief from that. I think they want to see how far they can get.”

United sacked Jack Ross in the wake of their club-record home defeat and installed his assistant, Liam Fox, in his role, but they are locked on nine points with bottom club Ross County.

“That day was a little bit unusual in that we just hit a real golden streak of creating opportunities and scoring goals,” Postecoglou said.

“We have had games where we have probably created more chances than we did that day – quite a few this year – and we just haven’t capitalised.

“That day it just fell for us and you have those kind of days. They have made some changes and they will come out here and make it tough.”

Celtic defender Cameron Carter-Vickers will return to the Celtic squad for Saturday’s match after missing Wednesday’s defeat by Real Madrid with a minor injury.