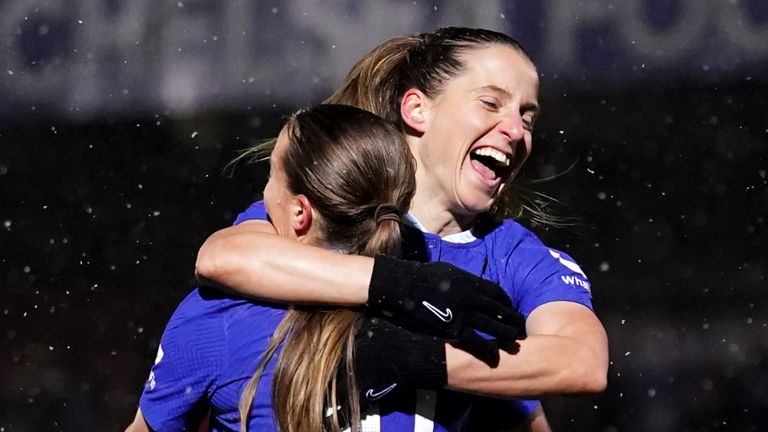 Report and free match highlights as Jelana Cankovic scores first-half brace coupled with controversial Fran Kirby strike; Reading fought back in the second half by scoring twice in two minutes via Sanne Troelsgaard and Amalie Eikeland; Chelsea are three points clear of Arsenal at the top

Chelsea are top of the Women’s Super League at Christmas by three points after making hard work of beating lowly Reading 3-2 at a freezing Kingsmeadow.

Despite the minus temperatures and snow falling, the Blues were red hot in the first half as Fran Kirby gave them a controversial lead with replays showing Johanna Rytting Kaneryd offside in the build-up.

Chelsea quickly moved through the gears to be in complete control at the break when Jelena Cankovic scored twice in four minutes with a tidy finish and then a glancing header.

However, Emma Hayes’ side received a taste of their own medicine as Reading netted a quickfire double inside two second-half minutes from Sanne Troelsgaard and Amalie Eikeland, but the hosts held on to claim a ninth consecutive WSL victory.

Arsenal moved level on points with Chelsea after beating Aston Villa 4-1 earlier on Sunday afternoon, but the Blues were soon on course to restoring their advantage with some smart thinking. Reading switched off as Cankovic took a quick free-kick, slipping in Rytting Kaneryd, who was offside, and she squared for Kirby to score from close range.

Reading were furious with the officials as their half began to unravel. Cankovic netted a second after pouncing on a loose touch from Gemma Evans inside the box when the ball came back off the left post following Rytting Kaneryd’s volley.

Chelsea were in full flow for their third, Kirby feeding the overlapping Erin Cuthbert, who crossed perfectly onto the head of Cankovic to steer home via a post.

Cankovic should have had a hat-trick in the second half when she side-footed wide just two minutes before Reading were gifted a way back. Troelsgaard shimmied past Magdalena Eriksson in the box before firing a low shot which uncharacteristically squirmed under the body of Ann-Katrin Berger.

Reading’s next attack put them within a goal of producing a remarkable comeback as Emma Harries raided down the Chelsea left before pulling back for Eikeland, whose first-time effort crept in. Chelsea, though, held their nerve to stay at the top of the tree.

Bright: We won’t dwell on second half

“The message that the manager has told us is that it doesn’t matter who starts our games – we have the depth and we have the quality.

“Credit to the girls who don’t always get the minutes as they are always prepared for their chance. Their training levels are just as high so that’s the beauty of having the squad we do.

“It was a really strong performance. We weren’t surprised by the grit, fight and desire they showed in the second half. We were disappointed to concede the goals but we won’t dwell on it.

“We know what we want to achieve this year but we’re going game by game. The league is getting harder but now we’ll turn our focus to the Champions League.”

Chelsea will aim to secure qualification to the Champions League quarter-finals when they head to Vllaznia Femra on Friday 16. The Blues need just a point to advance. Kick-off is at 5.45pm. Chelsea will have another chance to reach the knockout stages at Stamford Bridge on Thursday 22 when they host PSG at 8pm in their final Group A fixture.

Chelsea return to WSL action in a huge clash at title rivals Arsenal on Sunday January 15, live on Sky Sports. Kick-off is at 12pm.