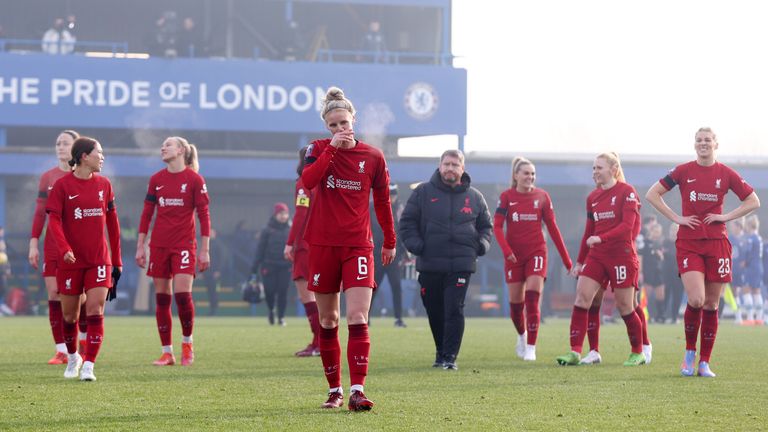 Chelsea vs Liverpool fixture in WSL abandoned after just six minutes due to frozen pitch; Chelsea manager Emma Hayes: “You could see from the opening minutes that it was like an ice rink down the sides. The game should never have started”; Brighton vs Arsenal also postponed

The Women’s Super League game between Chelsea and Liverpool was abandoned after just six minutes due to a frozen pitch.

The match at Kingsmeadow had passed a pitch inspection two hours before the 12.30pm kick-off.

But after Chelsea midfielder Erin Cuthbert took a heavy fall in the fifth minute, the referee deemed the pitch unplayable and called off the fixture.

Arsenal’s trip to Brighton, which was set to be broadcast live on Sky Sports, was also postponed at 4.11pm on Sunday, two hours and 34 minutes prior to the scheduled 6.45pm kick-off time at Broadfield Stadium.

Chelsea manager Emma Hayes said she thought the pitch had not looked playable since the morning, and that the game should not have kicked off in the first place.

“You could see from the opening minutes that it was like an ice rink down the sides,” Hayes told the BBC.

“Matt Beard [the Liverpool manager] was upset that it even got to that point and he’s right.

“It’s not for managers to decide if it’s on – it’s up to the FA and officials. We have to say to ourselves that it’s time for undersoil heating. We’ve got to take our game seriously. Yes, we can have our blowers and pitch tents, but it’s not enough.

“The game should never have started. Everyone wanted to get the game on, but when you have got emotions of teams wanting or not wanting to play, that’s when you need a decision from above. The FA weren’t here – they need to be making the decision.

“It wasn’t playable at 9.30am, so they said to give it until 2pm. There was a section that was quite hard, so they put blowers on it. They tested everywhere else and it wasn’t too bad, but as soon as you take the covers off it becomes a different situation.

“On top of that, the temperature hasn’t changed. When the sun rises and you get your feet on the grass, sometimes it can change – but it’s a block underneath and not playable. I saw Niamh Charles slip. I understand; we have to put player safety first.

“We’ve made progress with investment into the quality of grasses and surfaces across the league. No game at the top level of the women’s game should be cancelled. We need undersoil heating – we don’t live in Barbados.”

Liverpool manager Matt Beard added: “Players from both sides have slipped. Like I said before, the game should have never gone ahead.”

On the pitch being frozen, Beard said: “They were going to give it a chance, so that was the explanation. It wasn’t safe down there [the dugout side]. There were patches in the centre and other areas. I guess where they had the heat, but the majority of the pitch, it wasn’t the case.

“Chelsea have done everything they can to try and get the game on. I’m surprised it kicked off at 12.30pm because we got told this morning that we can try and kick-off the game at 2pm, but we’ve got the phone call to say that the game was back on at 12.30pm. I was a bit surprised.”

Jamie Weir speaking moments after Chelsea vs Liverpool was abandoned:

“Dramatic scenes at Kingsmeadow. The match has been abandoned with only six minutes played.

“If you were with us earlier on, you’d have seen there was a big tent over the pitch.

“The officials were concerned that the ground was frozen underneath. They had the hot air blowers going on the pitch and they said we will go ahead.

“They kicked the game off and six minutes in, they decided to abandon the match.

“The Liverpool players have gone over to the travelling fans and given them applause for coming all this way on a freezing cold day.

“The Chelsea players have gone back into the changing rooms. Emma Hayes and Matt Beard, the two managers, are standing around on the pitch, discussing what is going on.

“It’s quite farcical to be honest that we’ve even got to this stage. I can’t believe what I’m seeing.”