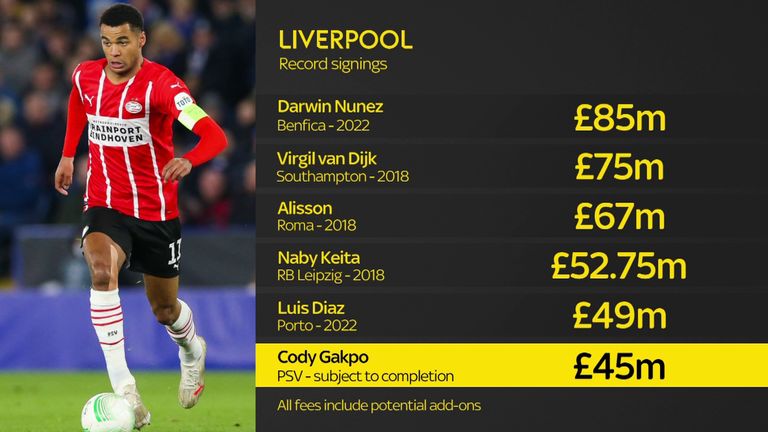 Jurgen Klopp on Liverpool’s new signing Cody Gakpo: “The potential he has and the quality he showed already… makes him a really interesting player. That’s why we were very interested to get him in, and I’m really happy we could do it. It’s big for us and for him as well.”

Jurgen Klopp hailed incoming forward Cody Gakpo as a “really, really interesting player” and said convincing him to join Liverpool was a “home run” ahead of his transfer.

Gakpo was announced as Liverpool’s first signing of the upcoming January Transfer Window on Wednesday night, for a fee between £35m to £45m from PSV Eindhoven.

The 23-year-old, who was a target for Manchester United in the summer, has been in fine form for club and country this season, scoring three times at the World Cup and nine times in 14 games in the Eredivisie.

Speaking publicly about the transfer for the first time, Klopp explained how easy it had been to convince Gakpo to join the club and paid tribute to the Liverpool staff who had kept the deal quiet.

“He’s a really, really good player,” Klopp said. “The package is really interesting, the potential he has and the quality he showed already in Holland and (for) the national team as well.

“It makes him a really interesting player. That’s why we were very interested to get him in, and I’m really happy we could do it. It’s big for us and for him as well. He’s obviously delighted about joining us.

“Virgil [Van Dijk] had a word before he technically signed, but we didn’t tell him specifically to speak to him. When you are manager of Liverpool, you think you have to convince someone [to join] – but then you realise the door is more or less wide open, it’s a home run.

“The job Julian [Ward] did to bring Cody in was exceptional, a few people were involved and nothing came out which is very helpful in all departments. We are very early [with the transfer], which is good.”

Klopp revealed Gakpo could be ready to be included in Liverpool’s first game of 2023, against Brentford on January 2, but said he was not optimistic the required paperwork would be done in time – and instead focused on their FA Cup third-round tie with Wolves on January 7 for his debut.

The Reds manager was tight-lipped on the financial impact on any other January business at Anfield, saying any moves would be more down to finding “the right players” than money.

“In principle it’s like this for all people in the world: The money you spend has an impact on the money you can spend (in the future),” he added. “It’s not that it increases it. It has nothing to do with each other.

“We know what we want to do and we will see if we can do it.”

Klopp also rejected the idea that injuries to Luis Diaz and Diogo Jota had played a part in the club adding to its forward ranks.

“The injuries were not at all an impact [on the signing],” he said. “We decided to do something from a sports point of view without having the financial green light already, two or three months ago. We are really, really happy that we could get Cody.

“I heard a little bit of discussion here and there, he’s a young player with a lot of potential. If he was already scoring 40 goals in Spain or whatever, he would’ve been unaffordable.

“In this kind of thing, it’s all about timing, getting the boys in the right moment where they’re not already scoring 55 goals a season.

“It’s why we were really convinced, he always made the next step and it’s what makes it so interesting. We believe in our process when players come here, they all make steps forward because of the way we work and can help them.”

Liverpool’s win over Aston Villa on Boxing Day was their third league victory in a row – their longest run this season.

Ahead of hosting Leicester at Anfield on Friday, live on Sky Sports, Klopp emphasised the importance of the Reds’ mid-season trip to Dubai during the World Cup break, where his side were able to focus on getting back to the heights of previous seasons.

“We were busy in the break. We realised we had to go back to last season to look at the real situations,” he said.

“We worked a lot on these kind of things. It wasn’t easy to change straight away, the solution isn’t always in front of you with a problem.

“I was really pleased with the start against Aston Villa, I don’t know how many times I’ve been told we’ve conceded the first goal – that’s something you can’t avoid always, but it’s really important that we found a different start into the game.

“City in the Carabao Cup was different, that wasn’t what we wanted, but against Villa it was. That’s the first step into a game, it’s something we work on and the intensity in our defensive situation, the pressing, must be on a different level.

“We worked a lot on it, and I saw signs, but it’s a long-term project – there’s another 24 games to go, and we have to show that in all of them.”

During the World Cup, Netherlands boss Louis van Gaal said: “Cody Gakpo has everything it takes to become a star” and the forward certainly looks like he is on the fast track to the top of the game after backing up his brilliant Eredivisie form in Qatar.

A goal in each group stage game – one with his head, one with his left foot and one with his right foot – was testament to his rapidly improving play in the final third, appetite for the big stage and versatility. His standout performances for Van Gaal came as a centre-forward or No 10. At PSV he has shone as a left winger, cutting inside.

But those traits have not come about by chance – Gakpo is meticulous about his development, even hiring a personal tactics coach to analyse his game. His steadily rising goals and assists-per-90 minutes stats for his club show that extra homework is paying off.

That mentality will have impressed his suitors as much as his league-topping tally of goals and assists. At 23, Gakpo is already at a high level – but has the determination to get even better. That makes him an attractive investment.

Pace and drive running in off the flank; power and precision in his shooting; creativity as the Eredivisie’s top chance creator; skill and speed with his dribbling; aerial threat, as he showed against Senegal… Gakpo has all the attributes required of a modern forward and after his perfect treble at the World Cup had clubs across Europe scrambling for his signature before Liverpool won the race.