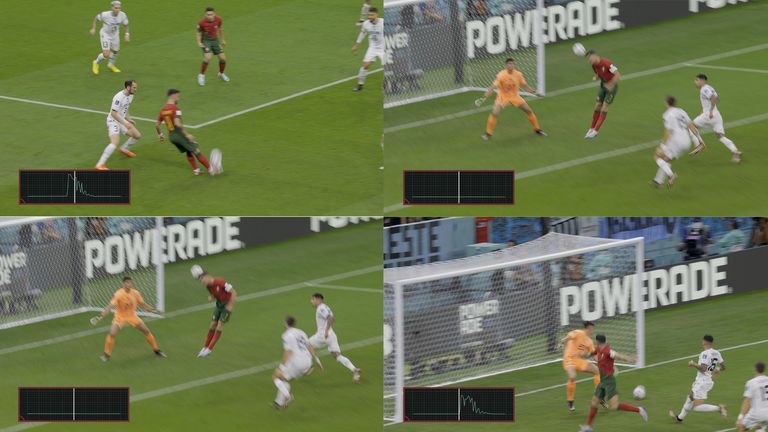 Cristiano Ronaldo claims he got a faint touch with his head to score Portugal’s opener in their win over Uruguay; Bruno Fernandes credited with goal by FIFA; Adidas technology inside match ball proves Ronaldo did not touch Manchester United midfielder’s cross

Cristiano Ronaldo did not score Portugal’s opener in their 2-0 win over Uruguay at the World Cup, according to Adidas technology inside the match ball.

Ronaldo claimed he had got the faintest of touches with his head on Bruno Fernandes’ cross to give Portugal the lead as he celebrated jubilantly, but FIFA later awarded the goal to Fernandes.

The Manchester United midfielder, however, credited Ronaldo with the goal as he told reporters afterwards: “The feeling I had was that Cristiano touched the ball.”

But Adidas have have now proven the 37-year-old never touched Fernandes’ cross thanks to a sensor inside the ball.

An Adidas statement read: “Using the Connected Ball Technology housed in adidas’s Al Rihla Official Match Ball, we are able to definitively show no contact on the ball from Cristiano Ronaldo for the opening goal in the game.

“No external force on the ball could be measured as shown by the lack of ‘heartbeat’ in the measurements and in the attached graphic.

“The 500Hz IMU sensor inside the ball allows for a high level of accuracy in the analysis.”

Adidas’ findings have denied Ronaldo a ninth World Cup goal which would have brought him level with Eusebio for Portugal.

In pictures: How technology shows Ronaldo did not touch Fernandes’ cross

What they said: | ‘I thought Ronaldo touched the ball’

Speaking after the game, Fernandes said he thought his former Manchester United team-mate had got a touch.

“The feeling I had was that Cristiano touched the ball,” the midfielder said. “I was passing the ball to him. What matters is that we’re going through to the next round after playing a very tough opponent.”

Manager Fernando Santos, meanwhile, laughed off the question when asked in a press conference.

“I think it was a great match,” he only replied. “Our team played very well and the rest for me, does not matter.”

Ronaldo did not speak to reporters post-match.

With their victory on Monday night, Portugal are through to the last 16, but still need a point against South Korea on Friday to be declared Group H winners.