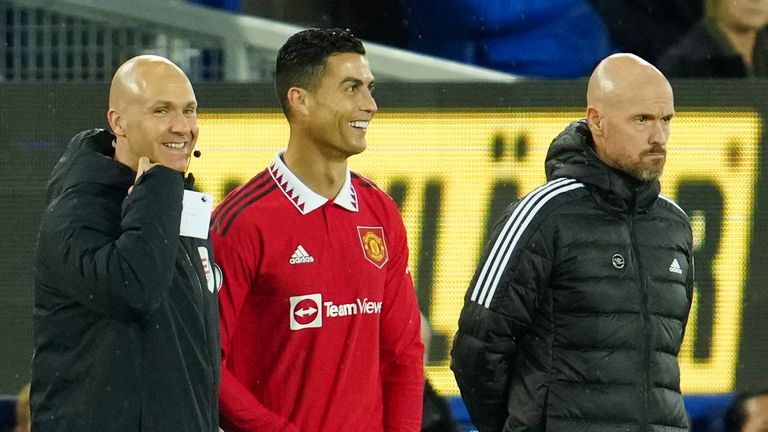 Man Utd issued a statement on Tuesday announcing they had reached a mutual agreement with Cristiano Ronaldo to terminate his contract; Roy Keane: “I don’t think it’s been great management. It’s been a very difficult situation but I don’t think the manger comes out with it [looking well]”

Manchester United manager Erik ten Hag has been criticised for his handling over Cristiano Ronaldo’s acrimonious exit from Old Trafford by Roy Keane.

United issued a 67-word statement on Tuesday evening announcing they had reached a mutual agreement with the 37-year-old forward to terminate his contract.

In the interview on TalkTV – aired in two parts on Wednesday and Thursday last week – Ronaldo said he felt “betrayed” by the club and has “no respect” for manager Erik ten Hag.

“People might say he’s put a marker down, part of management is looking after the top. You do have to treat top, world-class players differently. This idea that you treat everyone the same, you don’t.

“I think it’s better for everybody. The club, obviously. You don’t want that dragging into the second half of the season. Ronaldo’s obviously ran out of patience. People say ‘is his reputation tarnished at Manchester United?’ Far from it.”

Despite departing United with immediate effect, Ronaldo has been banned for two matches and handed a £50,000 fine for hitting a mobile phone out of a fan’s hand at Everton.

The 37-year-old had the altercation after a 1-0 defeat at Goodison Park on April 9, for which he was cautioned by Merseyside Police.

The FA also charged him with improper conduct and an independent panel has handed down a suspension and hefty fine.

“I think it was on the cards for the last few months,” former United midfielder Keane added on Ronaldo’s departure.

“Obviously, the interview was the tipping point for him but that’s it, life goes on.

“Manchester United are a great club, Ronaldo’s a great player. It’s like a divorce in a relationship, we all know how that feels, and you go your separate ways.

“He should have probably left in the summer, but whether that’s the player’s fault or the club’s, it was never going to happen. The new manager was never going to play him, you cannot have Ronaldo as a suit or fringe player. It’s just not right. It’s sad but these things happen.”

Ronaldo’s key quotes – a snapshot of his full interview

Bruno Fernandes insists Portugal are “focused 100 per cent” on the World Cup despite the distraction of Ronaldo’s departure.

Speaking at a press conference ahead of Thursday’s game against Ghana, Fernandes said: “We are all focused 100 per cent on the national team and the World Cup. We are all aware of what we have to do.

“We are in a championship that is the dream of every player and a competition where every player wants to play.”

“Cristiano has always been an inspiration for me so it was a dream come true to be able to play with him but we know nothing ever lasts forever.

“It was good while it lasted. We have to respect his decision, whether we agree or not.”

Where would Ronaldo start?

“Which top club would start Ronaldo every single game? At which club will he be guaranteed a place in the first XI? We saw in the summer that the only offer that came in for him was from Saudi Arabia – United were prepared to accept that and he didn’t want to go.

“As a free agent if he puts in a really solid performance at the World Cup, people will forget his disruptive behaviour and he might get a move, but I can’t see where and to who.

“Perhaps the solution is for Ronaldo to accept he is one of the greatest players we have ever seen – but he is 37, and progressive clubs – clubs that do have ambitions of winning the Champions League aren’t going to funnel everything through him. He can’t be the main man.”

“I understand that in a new job [you try to make an impression.] Manchester was so bad in the last five years that they should clean the house, let’s say it in that way,” said Ronaldo.

“But the way they approach, the way the press make this so big. I really understand in the beginning because I didn’t do the pre-season, I don’t start to play, but going more further than that.

“Other things happen that people, they don’t know. And I’m not hiding that the empathy with the coach is not good. I’m honest.”

That was a big change of stance after he gave an interview to United in June saying he was happy at the club and urged for Ten Hag to have time at Old Trafford following his arrival from Ajax.

Were Ronaldo’s new jabs at Ten Hag simply in reference to his lack of starts in the Premier League this season?

It’s not clear because, after all, this is a player who was given the captain’s armband soon after walking out of the team’s win over Tottenham before full-time. When United were thrashed at Manchester City, Ten Hag said he did not sub Ronaldo on “out of respect for his big career”.

United felt they bent over backwards to accommodate Ronaldo and Ten Hag always insisted he was an important part of his plans.

What United did not do was indulge Ronaldo and guarantee him a starting spot. He was their top scorer last season but with Ten Hag now in charge the stats backed up the Dutchman’s use of Ronaldo.

When Ronaldo did not start in the Premier League this season, United’s win rate trebled, their points return doubled, their scoring rate quadrupled and the team ran, on average, 4km more per game.

An abrupt end after a fairytale start

Ronaldo’s departure signals an abrupt end to a career at United that was revived amid much fanfare in August last year.

He had looked set to join rivals Manchester City from Juventus but a late intervention from United took him back to Old Trafford.

Ronaldo first joined United from Sporting Lisbon as a teenager in 2003. He won three Premier League titles and the Champions League before going on to even greater success with Real Madrid.

After nine years at the Bernabeu and a further three at Juve, he returned to United as a five-time Ballon d’Or winner.

He scored 18 goals in the Premier League last season but United struggled, finishing sixth in a campaign in which they were managed by Ole Gunnar Solskjaer, Michael Carrick and Ralf Rangnick.

He made a slow start to the current campaign under new boss Ten Hag after missing their pre-season tour, starting just four Premier League games. There were further controversies as he left the ground early during a friendly and refused to come on as a substitute against Tottenham.

Ronaldo leaves United for what is surely the final time having scored a total of 145 goals in 346 appearances.