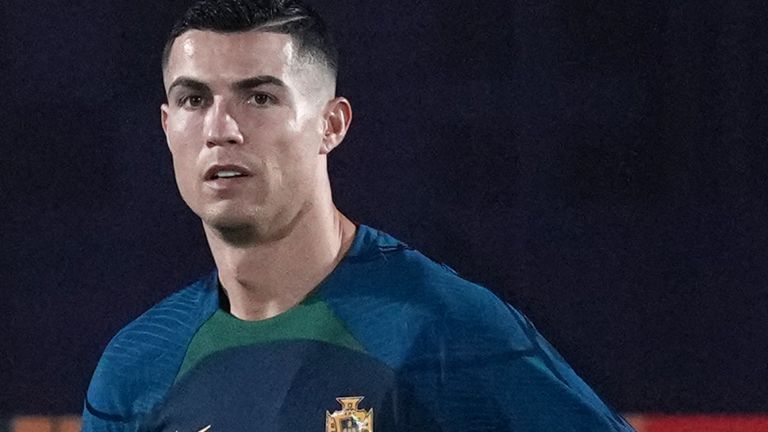 Cristiano Ronaldo says his explosive interview with Piers Morgan last week has not been a distraction in the Portugal changing room at the World Cup; Ronaldo also says his relationship with Manchester United team-mate Bruno Fernandes is “excellent” after awkward handshake

Cristiano Ronaldo says he is “bulletproof and iron-clad” following his explosive interview last week and says his relationship with Manchester United team-mate Bruno Fernandes is “excellent”.

But in a surprise and unadvertised media appearance for Portugal ahead of their World Cup opener against Ghana on Thursday, Ronaldo publicly addressed his bombshell interview for the first time since it aired amid questions whether it had been a distraction in the Portugal dressing room.

He said: “The atmosphere is excellent, no problems, we are completely focused. You can help by not talking about me. I’m completely bulletproof and iron-clad.

“If you ask other players about Cristiano Ronaldo I would be upset. If you want to ask him about the World Cup and the team, I would like you to do that.”

He added: “In my life, the best timing is always my timing.

“I don’t have to think about what other people think. I speak when I want. The players know me really well for many years and know the type of person I am.

Piers Morgan has revealed Cristiano Ronaldo first told him of his Man Utd frustrations in April this year.

In his Times column, Morgan said: “On April 15 this year, Cristiano Ronaldo rang me to vent his spleen about Manchester United.

“His [Ronaldo] dream comeback just eight months earlier had turned into a nightmare and for an hour, he passionately articulated all the problems he thought were behind the club’s demise from perennial champions under his father figure Sir Alex Ferguson, to abject mediocrity.

“I can’t just keep ignoring what’s going on inside the club right now,” he told me. “It’s so amateur. No defined goal, no leadership, no organisation, just a desert of ideas. The future is very dark unless things change very fast.”

“I asked him if he regretted going back and he sighed: “Perhaps my heart spoke louder than reason.”

“If you want to speak publicly about this, let me know,” I told him at the end of the conversation.

“If the situation continues, I will,” he vowed. “The supporters don’t deserve this — they deserve to know the truth.”

“Its an ambitious group that is hungry and focused. So I’m sure it [the interview] won’t shake the changing room’s concentration and focus.”

Referring to himself in the third person, Ronaldo said that “everything related to him will always spark criticism and controversy”.

Sky Sports News understands Ronaldo was put up for the press on Monday because England were playing Iran that afternoon. The hope was the British media’s attention would be elsewhere and they would not be able to attend.

Ronaldo: My relationship with Fernandes is excellent

Ronaldo confirmed the awkward handshake between him and United team-mate Fernandes that was caught on camera and went viral was the result of a joke between them.

He said: “My relationship with him [Fernandes] is excellent.

“I was joking with him. His plane arrived late and I asked if he had come by boat. That’s it.”

After missing Thursday’s friendly win against Nigeria in Lisbon due to a stomach problem, Ronaldo has been training as usual with team-mates since arriving in Qatar on Friday and he revealed he feels in shape.

“I’m feeling great, I’m recovered and I’m training well and ready to start the World Cup in the best way possible,” he said.

“I feel that this Portugal squad has amazing potential. I think we can win for sure, but we need to focus on the next game. So, it’s focusing on Ghana, get a win and go from there.

Manchester United are exploring ways to terminate Ronaldo’s contract at the club following his explosive interview.

United said they would consider their response to Ronaldo’s comments “after the full facts have been established” and released a short statement on Friday announcing the club had “initiated appropriate steps”.

It is now clear there is “close to zero chance” Ronaldo will play for the club again.

United have not put a time frame on the process, but it is thought they want Ronaldo’s exit done “cleanly and quickly” and in as dignified a way as possible – not only to minimise distraction at Old Trafford, but also to show respect to Portugal during the World Cup.

United do not want to give Ronaldo a pay-off to leave and given the will of both player and club to part ways, it is hoped a resolution can be reached soon.

It is not an easy process given Ronaldo’s contract is one of the biggest in the history of sport.

Sky Sports News learned last week United do not accept some of the criticisms Ronaldo made in the interview.
Ronaldo criticised the club for a lack of investment in the 13 years since he left Old Trafford. Sources have insisted United have invested in their facilities – notably the training ground, restaurant and swimming pool.

The Portugal forward was also critical of Ten Hag but sources insist Ronaldo was treated with respect by the club and the manager. In news conferences, Ten Hag always maintained Ronaldo had been given time off in pre-season to deal with family matters.

It has been confirmed to Sky Sports News there was an offer from Saudi Arabia in the summer, which United would have accepted but Ronaldo did not want to make the move.

There were no other official offers for the player in the last transfer window.