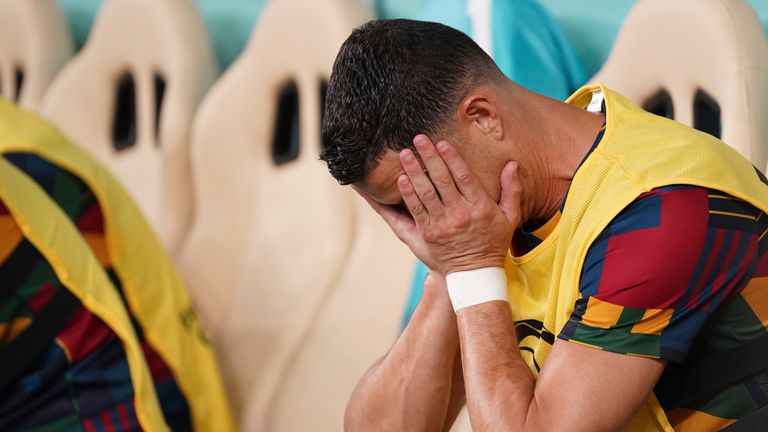 Cristiano Ronaldo denied a report which claimed he threatened to leave the World Cup after being dropped for Portugal’s 6-1 thrashing of Switzerland in the last 16; Fernando Santos says they had “a frank and normal conversation” but Ronaldo never told him he wanted to quit the tournament

Santos benched Ronaldo for Portugal’s last-16 tie against Switzerland, a move which caused controversy but ultimately produced the team’s best performance of the tournament as they romped to a 6-1 win, with his replacement Goncalo Ramos becoming the first player to score a hat-trick at this year’s World Cup.

Ronaldo has continued to dominate the headlines in the aftermath of his axing and was forced to deny a report which claimed he had threatened to leave Qatar in an exchange with his head coach.

Santos has sought to clarify the situation with Ronaldo himself ahead of Saturday’s quarter-final against Morocco and leapt to the defence of Portugal’s all-time record scorer.

Ronaldo has endured a tough tournament in Qatar

“He has never told me that he wanted to leave our national team and I think it’s high time we stopped with this conversation, that we stop with the polemics.”

Explaining how he broke the news that Ronaldo would be dropped, Santos said: “I spoke to him after lunch on the day of the game and invited him into my office.

“For obvious reasons, Cristiano was not very happy about it as he has always been the starting player. He told me: ‘Do you really think it’s a good idea?’ but we had a normal conversation in which I explained my viewpoints and of course he accepted them.

“We had a frank and normal conversation.”

Ronaldo’s former Real Madrid team-mate Mesut Ozil has also defended the Portugal captain and asked for him to be shown more respect.

“I really don’t get where this constant negativity from the press about Cristiano comes from,” Ozil wrote on Twitter.

“The media is just trying to get clicks, and pundits who don’t have a career anymore just want to get attention with his big name and try to make him look bad.

“He is soon 38 years old – so what’s the surprise that he doesn’t score 50 goals a season anymore? Every football fan out there should be happy to have seen him playing world-class football for 20 years.

“I don’t think anyone from the new generation will be able to match his numbers again. He will forever be in his own category. Everyone should show more respect to one of the greatest athletes in sports history…”

The Portuguese FA on Thursday had denied a report that claimed Ronaldo threatened to leave the World Cup.

Record, a Portuguese publication, reported that Ronaldo told his coach he might leave Qatar after finding out he would be benched for the last-16 encounter against Switzerland – which Portugal won 6-1 – before calming down and realising his departure could negatively impact the team.

But the Portugal Football Federation rejected this version of events in a statement which defended Ronaldo’s legacy and dedication to the team.

The statement read: “News released this Thursday reports that Cristiano Ronaldo threatened to leave the national team during a conversation with Fernando Santos, national coach.

Ronaldo: Portugal too close to be broken by outside forces

Ronaldo took to social media to respond to reports he threatened to leave the World Cup, reiterating outside forces would not derail Portugal.

“A group too close to be broken by outside forces,” he wrote on Twitter. “A nation too brave to let itself be frightened by any adversary. A team in the truest sense of the word, which will fight for the dream until the end! Believe with us! Strength, Portugal!”