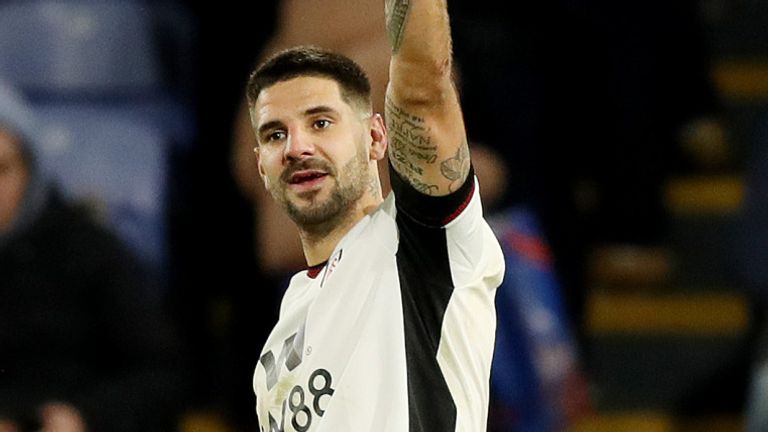 There had been question marks over the striker’s fitness after his efforts with Serbia at the World Cup, but he showed no ill-effects from a busy period, putting in a star turn at Selhurst Park.

“Mitrovic is fully involved with us and fully motivated. He’s been a great professional for our club and since I joined, I can speak highly about him more and more,” Fulham manager Marco Silva said after the game.

“I had a conversation with him yesterday before the training session and he started to feel better over the last few days.

“We know that he’s not in the best physical condition to support the game and always be in a game with the intensity that I want him to play and he likes to play as well. But he has the quality, the maturity and experience to handle this situation well.

“When I am saying to you every time that Mitrovic is much more than a goalscorer, I think he showed that this afternoon again. Another assist from him, he was involved in all our goals and the key moments again.

“He’s been really important for me, I’m really pleased for him and the goals he scored… he deserves all the credit.”

Despite being a goal and a man down, there was still hope for Crystal Palace after the break, but their afternoon continued to disintegrate. James Tomkins (57) was also sent off after picking up two yellow cards – the second for a stray elbow catching Mitrovic in the face.

The Fulham striker was involved in more controversy for Fulham’s second. Mitrovic had nodded down Andreas Pereira’s corner for Tim Ream (71) to fire home, but the goal was subject to a VAR review for handball. However, despite referee Andy Madley consulting the screen, the goal stood.

Mitrovic capped off a fine afternoon with a late goal of his own. He glanced a header home from Willian’s scooped ball from the left, sealing an impressive three points for Fulham.

It sends Silva’s side into eighth ahead of the remaining games this week on 22 points. Crystal Palace stay in 11th on 19 points after a difficult return to action.

How Fulham eased past Crystal Palace

The opening 30 minutes were a rather quiet, scrappy affair as Premier League football returned to Selhurst Park for the first time in 58 days. Vicente Guaita was at full stretch early on to flick Pereira’s effort over the crossbar. The woodwork was rattled at the other end too as Jordan Ayew’s shot clattered against the top of the bar after some fine play from Michael Olise.

The deadlock was broken just after the half-hour mark, when a poor pass from former Fulham defender Joachim Andersen allowed Mitrovic to drive down the right wing and send in a fine cross for Decordova-Reid to glance his header home.

Two minutes later and Palace’s afternoon worsened. Mitchell tried to recover after a heavy touch but instead of reaching the ball, he caught Tete late with his studs up. It was a straight red card for the 23-year-old full-back, who appeared emotional as he made his way down the tunnel.

He was then joined by Tomkins as Palace received another red card just 12 minutes into the second half. The veteran defender caught Mitrovic in the face with an elbow, leading to his second booking of the afternoon as Palace’s chances of fighting their way back into the contest continued to shrink.

While 10 men can make a team hard to beat, nine men are certainly an easier prospect, and Fulham pushed for a second goal in the final half hour. Pereira struck the post once again, this time with a thunderous left-footed effort. Then, Guaita pulled off a marvellous save with his legs to keep out Mitrovic.

There was more drama to come as Fulham’s second goal was subject to a VAR review as Mitrovic and Joel Ward had hold of each other when Pereira whipped in a fine corner, with the ball appearing to hit the striker’s arm before finding Ream. The Fulham captain then rolled past Andersen before firing home from close range.

The Palace players were immediately over to the referee to plead their case and were given hope as he consulted the pitchside monitor. However, after assessing the incident, the goal was awarded.

Mitrovic soon beat Guaita too as he sealed a fine away win for Fulham. Willian cushioned a cross superbly on the left before scooping it back into the middle where the striker was waiting to glance his header home, capping a fine return to domestic action.

Player of the match – Aleksandar Mitrovic

Who else? Showed his quality and although Crystal Palace were masters of their own downfall at times, Mitrovic made sure they paid for it.

Player of the match: Aleksandar Mitrovic.

Vieira: We got what we deserved

“From the first minute I would say that Fulham were the better team. I think there were too many aspects of the game when we weren’t present and at the end we got what we deserved because we didn’t do anything to get something from that game.

“It is really difficult to understand right now, and that is one of the frustrations I have right now because I was really pleased with what I have seen in the last couple of weeks in training and I was expecting a better performance from my team.

“That just shows again the quality of the Premier League. When you look at Fulham and you look at the quality that they have, we still have a lot of work to do to compete. And today we didn’t compete at all.

“The two red cards didn’t help us but outside of those two situations it was more the performance from the first moment which let us down.”

Silva: We were the best team from the first minute

“It’s been a sad week for us as a football club. The Fulham family lost probably one of the best, if not the best, and the greatest player (George Cohen) from this club. Not just on the pitch, but off the pitch too, what he did every time and his connection with the community as well.

“I think we had a plan and the players stuck really well to it. The way we came here and we were brave from the first minute. We knew before the match how they have been strong at home. I think their home record speaks for itself, plus the last three games at home, they won all of them.

“When they have players like Zaha, Eze, Olise, Ayew and the attack line, if you don’t control them well, if you don’t press them from the first minute, with good organisation and being aggressive, it will be tough. I think we did it well and all the credit to the players.

“Second half, our speech during the half-time was to try and score the second goal as quick as we can because we knew that all their belief and energy would go down if we scored the second goal.

“After that, we killed most of the game and controlled it. We scored another one with more chances to score but I think we deserved that. We were the best team on the pitch.”