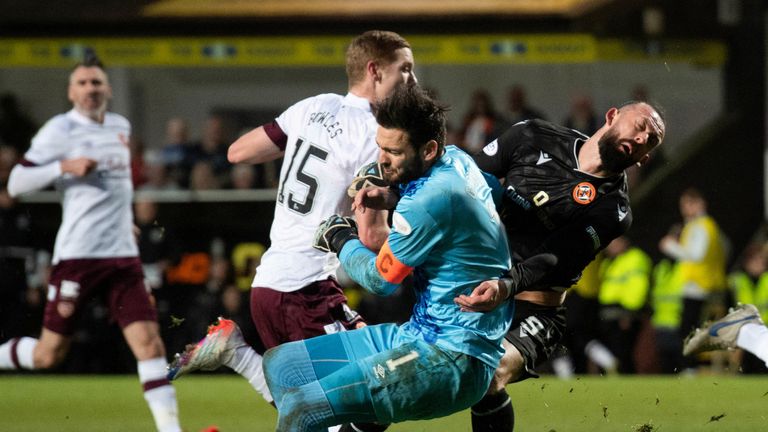 Hearts goalkeeper Craig Gordon suffered a horror leg injury as his side came from behind twice to draw 2-2 with Dundee United in an action-packed Christmas Eve showdown at Tannadice.

The 39-year-old was carried off with his leg in a brace midway through the second half after a collision with United attacker Steven Fletcher, and subsequent pictures of the incident suggest the Scotland number one had done serious damage.

The Jambos – who secured a point through a stoppage-time penalty from Lawrence Shankland – also lost key centre-backs Craig Halkett and Stephen Kingsley to injury in a match that saw both sides have penalty awards overturned following VAR reviews.

Hearts started with the same team that beat Kilmarnock 3-1 in their first game back after the World Cup break.

There were three changes to the United side that started their last match against Aberdeen six weeks previously as Scott McMann, former Hearts midfielder Arnaud Djoum and Ian Harkes took over from Ross Graham, Craig Sibbald and Jamie McGrath.

Hearts were forced into an early change when Halkett – who has endured an injury-hit 2022 – fell awkwardly while shepherding the ball back to goalkeeper Gordon and had to go off. He was replaced by Australia defender Kye Rowles.

United made the breakthrough in the 20th minute when Fletcher’s half-volley from 20 yards out deflected off Rowles and beat Gordon at his right-hand post after the former Scotland striker had latched on to a ball over the top from Aziz Behich.

Josh Ginnelly almost found a response for Hearts in the 31st minute when he ran on to a lovely pass from Barrie McKay and burst into the United box but he curled his effort agonisingly over the bar.

The visitors lost a second centre-back to injury in the 38th minute when Kingsley clashed heads with Djoum while attacking a corner and was forced off, with Toby Sibbick coming on in his place.

But Hearts equalised in the 40th minute when Cammy Devlin won a tackle just outside the United box and prodded the ball through for Smith to slot past Mark Birighitti from 15 yards.

Hearts were awarded a penalty in the sixth minute of first-half stoppage-time when the ball struck Djoum’s hand as he slid in to challenge Devlin. However, referee Colin Steven was advised by VAR to review the incident and reversed his decision on the basis that it had struck the United midfielder’s supporting arm.

It proved a pivotal moment as United went ahead just two minutes after the restart when Dylan Levitt curled home a lovely finish from the edge of the box after being teed up by Glenn Middleton.

Fletcher looked all set to extend the hosts’ lead in the 58th minute when he headed Middleton’s cross towards goal but Gordon reacted superbly to tip it over the bar.

United were awarded a penalty in the 69th minute when Gordon clattered into Fletcher as he burst onto a Levitt pass. Once again, referee Steven overturned his initial decision after being instructed to review the video, but the bigger issue was the sight of the Hearts goalkeeper being carried off in clear distress.

Hearts kept going, however, and forced an equaliser deep into stoppage time when Shankland slotted home his 15th goal of the season from the penalty spot after he was deemed to have been tugged by United sub Graham.