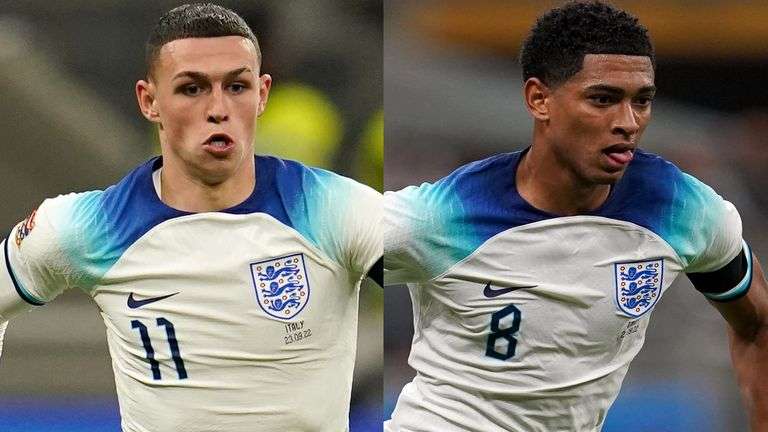 Giacomo Raspadori scored a thunderbolt winner for Italy as England were relegated to League B in the Nations League; Harry Kane and Raheem Sterling were largely ineffective going forward, but Nick Pope and Eric Dier did well on rare England starts

Jude Bellingham and Phil Foden were the shining lights for England on a dismal night in Italy as Gareth Southgate’s side were relegated in the Nations League.

Needed to be alert early on to keep out Giacomo Raspadori – although he was eventually flagged offside – and made a great save to deny Gianluca Scamacca’s bullet header at the near post. Made a few good saves in the second half too, but couldn’t keep out Raspadori’s superb winning strike in the second half.

Had a quiet start at right wing-back and looked better going forward than in defence. Made some good runs down the wing and sent in a few decent crosses – especially for a late Jude Bellingham header. However, was caught out too many times at the back, including for the goal, and was ineffective when taking set pieces.

All eyes were on Maguire, who hasn’t started for Manchester United in six weeks but keeps the faith of Southgate in a back three.

Had a rocky start when he got caught under a long ball – although Raspadori was offside – before being beaten at the back post by Scamacca. However, after having England’s first chance with a header in the 12th minute, settled into the game and mostly stayed out of trouble.

Looked largely assured in the middle of a back three. Made some vital blocks towards the end of the first half as Italy began to press again, although was far too easily beaten by Manolo Gabbiadini towards the end of the game. But he did acquit himself well on his first England start in just under two years.

Largely did well in the first half, but lived dangerously after the break. Walker was caught in behind by Federico Dimarco during one of Italy’s best chances, but the offside flag luckily went up. However, there was no saving grace a second time as he got caught under a high ball and stepped off Raspadori, allowing the Italian to find his space for the winner.

Replaced shortly after by Luke Shaw in the 72nd minute as Gareth Southgate switched to a back four.

Played out of position at left wing-back and had little impact on the game. Arguably not his fault, given he largely plays at right wing for Arsenal and struggled to adapt. Replaced by Jack Grealish midway through the second half.

As ever, solid in midfield for England and went about his business fairly quietly with few highlights – not always a bad thing. Hit a decent strike in injury time, but it was straight at Donnarumma.

Cool, calm and collected in midfield – and all at the age of just 19. Along with Foden, tried his best to drive England forward from midfield, even if the final product was lacking from his teammates. Should have scored a late header for England to equalise, but it lifted onto the top of the net. A good display overall.

The joint-best player on the pitch with Bellingham, but arguably not used enough. Linked up well with the Dortmund man and continued his good club form, trying to push England forward and be creative. His driving runs into the area on a promising break were sometimes ignored too.

He also showed good defensive awareness to close down a short Italy free-kick in the first half that could’ve cost England. Southgate must find a way to get him on the ball far more.

Created the first England chance in the 12th minute with a good cross for Maguire, but Italy doubled up on him defensively, leaving him largely ineffective. When he did find space early in the second half, he won a free-kick in a dangerous spot, but didn’t do much more.

Struggled for time on the ball and space to be effective. Drove forward well late in the half, but fired his shot well over and did not clock the run of Foden during a good break shortly after the break. Forced a double save from Gianluigi Dommarumma in the 77th minute as England searched for an equaliser.

Made a few decent runs in his 20-minute cameo, but to little effect. Only England player to be booked late on and will now miss the Germany game through suspension.

Not much to report from his own spell on the pitch. Did not make much of an impact going forward and was not troubled massively at the back.