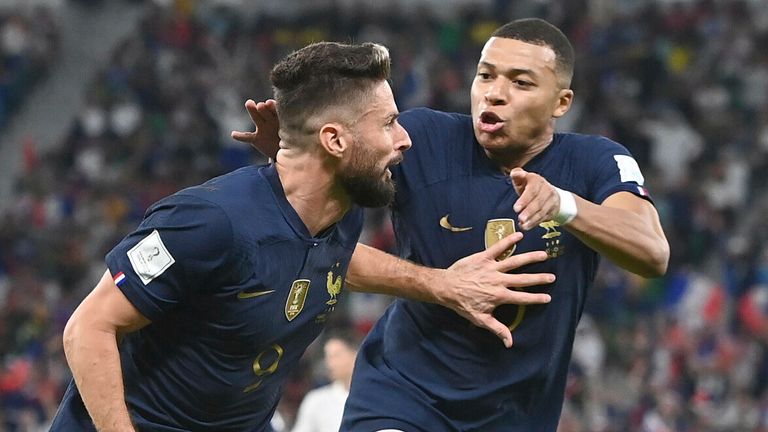 Olivier Giroud has named Kylian Mbappe the best striker he’s played alongside and has described the “bromance” the pair have ahead of France’s World Cup quarter-final with England.

Les Bleus take on Gareth Southgate’s Three Lions in Saturday’s last-eight clash, with former Arsenal and Chelsea striker Giroud set to line up alongside Mbappe in the French attack.

Giroud scored in the round-of-16 victory over Poland to break Thierry Henry’s all-time goalscoring record for France, while Mbappe is currently leading the Golden Boot charts at this World Cup, with five goals.

“Kylian is basically one of the best players I’ve played with,” Giroud said in a press conference. “He is amazing and is still young which is scary as he can still improve.

“He is very efficient and, from the beginning of the competition, he’s been crucial for us – very decisive, very competitive. He’s obviously the best striker I’ve played with in all of the teams I’ve played in.

“We’ve not seen the best of him, I hope it’s going to come soon and he will beat all the records. I know that and you know it as well.”

The 36-year-old’s goal against Poland in the last-16 came from Mbappe’s defence-splitting pass and Giroud described the “infectious enthusiasm” the two France forwards have.

“Football is so spontaneous that we can make movements like that. That goal came from that combination. Our relationship has always been good.

“Our relationship has always been good. And this infectious enthusiasm is something we want to share with the young players and make our fans happy.”

‘We don’t want to lose against England!’

Giroud has a great understanding of the English game, having played Premier League football for Arsenal and Chelsea for nine straight years between 2012 and 2021.

The France striker revealed he has been speaking with national team captain Hugo Lloris, who plays his club football with Tottenham, about how much they want to avoid a defeat to one of the country’s big rivals.

“For England, they have had a good tournament,” Giroud added. “I hope they will have a tough game on Saturday.

“I know this team very well, we were talking with Hugo regarding this game and we said we don’t want to lose against England.

“It’s a special game for us. They have so many young players in this generation, I think they have quality but quantity also in the squad. They have different options and it will be a nice game to watch. I hope it’s going to go well for us.”

Giroud also spoke about the danger of England captain Harry Kane who, like Giroud, has 52 goals for his national team and could also break the national goalscoring record in Qatar. Kane is one goal behind Wayne Rooney’s total of 53 for the Three Lions ahead of Saturday’s quarter-final.

“We have spoken with Hugo about him,” said Giroud about Kane. “He’s a player with a similar profile to mine. He is big, powerful and he has done well in front of goal.

“I think in these last months and years, he’s gone a bit deeper to get involved in the game. I don’t know if that’s due to his coach, but he makes a lot of passes.

“He’s still a goalscorer, yet he can find those key passes for his team-mates. There are similarities [to me] but there are some key differences.”

“Hugo is very, very unfazed,” Stephan said. “He will fight, I can say that as it’s likely he will play on Saturday. He’s played at a high-level career, 10 or 12 years at the highest level and is very rarely injured.

“He’s played with Harry Kane for a few years. He knows the manner in which he strikes the ball, where he moves. He knows how he uses his head and his runs too.

“That’s what you get when there are players who play for the same club. They will have a lot of things to say to each other when they go back to Tottenham.”

Stephan also predicted that France will have to focus on England’s wide players in Saturday’s quarter-final, as that is where their big threat is.

“The English team is a great team, one which is solid. It’s a team which has a lot of attacking areas,” Didier Deschamps’ assistant said.

“Like many of these good teams at the World Cup, they’re great on the wings. You think of [Phil] Foden, [Marcus] Rashford, [Raheem] Sterling, they’re really quick on the wings.

“We shouldn’t forget that they got to the final of the Euros and they have experience. They can play lots of formations, did really well against Senegal as a 4-3-3 and won 3-0. They always play three attackers, but in general, they play with five defensive players against better teams. Whether that’s the case on Saturday, we wait and see.”

Giroud also agrees with that assessment, especially with England being the tournament’s top goalscorers with 12 goals coming from eight different players.

“They have players who are quick on the wings,” Giroud added. “While they are dangerous in a lot of departments, that could be the key to the game. We will have to be solid defensively and block the flanks, but they’ll have to do the same as we’re quick as well.

“England are a complete team, good on set pieces as they are a big team with good headers of the ball.”