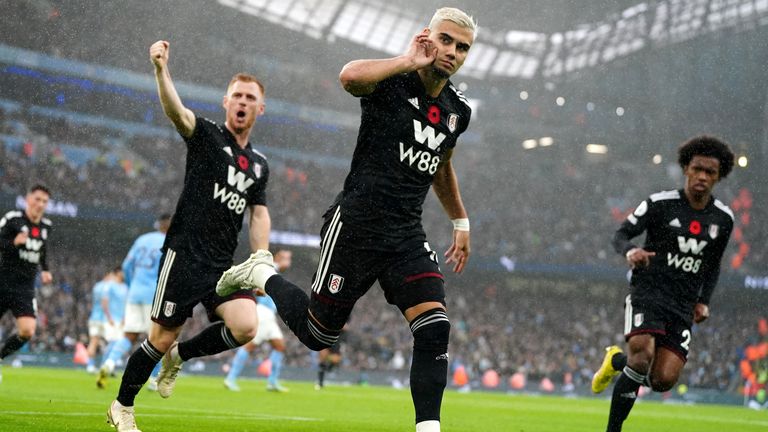 Erling Haaland came off the bench to score an injury-time penalty as 10-man Man City snatched a hard-fought 2-1 win against battling Fulham in the Premier League; “A penalty in the last minute, of course I would be nervous. But it’s an amazing feeling”

Erling Haaland admitted his 95th-minute penalty against Fulham was “one of the most nervous moments in my life” as Pep Guardiola hailed how his Manchester City side channelled their anger to move top of the Premier League.

Haaland emerged from the bench to score an injury-time penalty as 10-man City snatched a hard-fought 2-1 win against the battling Cottagers.

The visitors had looked like frustrating the champions after an Andreas Pereira penalty had cancelled out an early Julian Alvarez strike at the Etihad Stadium on Saturday. City had to play more than an hour with a numerical disadvantage after Joao Cancelo was sent off for the foul on Harry Wilson which led to Pereira’s equaliser.

Typically Haaland, fit again after illness and a foot injury but not ready to start, had the final say. It was his 23rd goal in his 17th appearance for City since joining the club in the summer.

The Norwegian told Sky Sports: “It’s fantastic. I was nervous [for the penalty]. It was one of the most nervous moments of my life, but fantastic. A penalty in the last minute, of course I would be nervous. But it’s an amazing feeling.

“I love it. I have been injured for a week and it is really important to win.”

When asked if it was great to be back, Haaland added: “I want to play every game. It was difficult [to be on the sidelines] but in the end we needed three points and that is what we got.

Pep: We played with right anger

Prior to his intervention, it had looked like City would be left to rue a chaotic period before the interval when they relinquished the lead as well as their composure and control of the game. Fulham, even without the threat of key forward Aleksandar Mitrovic, had proved more than a handful.

Cancelo’s dismissal meant City played 64 minutes with 10 men, the earliest red card they have received in a Premier League game they have gone on to win since March 2014.

Guardiola was enraged on the touchline and his mood was hardly improved as Pereira made no mistake to level the scores – but the relief was palpable as the Catalan joined in the celebrations at full-time.

“With and without the ball then we had to play at the right tempo and in the right moments. It was really good and one of the best experiences we’ve ever had here.

“You saw how we came together at the end and so it was a great afternoon for us. They missed Mitrovic who is really important for them, but the way we played for 65 minutes was amazing.

“We had more chances, more control and showed personality. We played with the right amount of anger and disappointment for many reasons.”

Silva: We must use defeat to grow

Guardiola turned to Haaland and Phil Foden on 64 minutes and the Norwegian seemed to have made the breakthrough as he headed home from a Kevin De Bruyne cross, but he was ruled offside by VAR.

City applied further pressure but were unable to test Bernd Leno until, in injury-time, Antonee Robinson clipped De Bruyne in the area. Haaland thumped home from the spot.

“We have to use it to grow, that is the only way. We have to grow in terms of maturity in these situations and understand that in some moments, mistakes can happen.

“The commitment, the attitude, everything was there. The penalty is a tough one to take. The game was completely under control when the penalty came.

“We know the reality as we know the type of team we’re playing against – it was much more than just Haaland both on the pitch and on the bench.

“We wanted to start differently by being a bit more brave on the ball and prepare our attacks better from the first minute but the effort was there.”