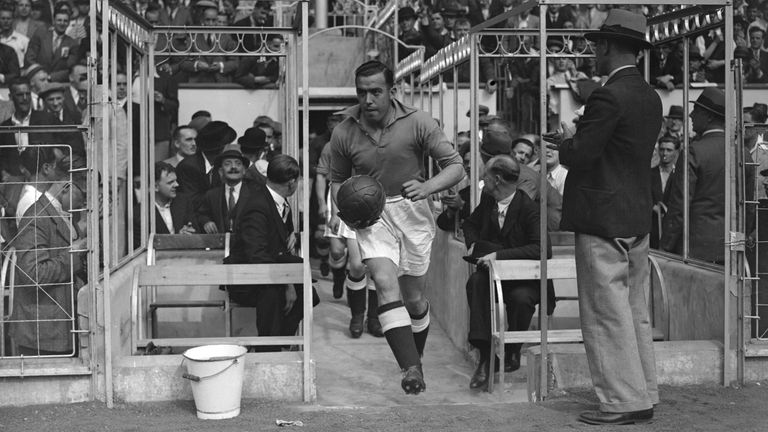 Will Man City striker Erling Haaland smash the all-time Premier League Golden Boot goal record of 32 goals in a 38-game season set by Mohamed Salah in 2018? Haaland averages 2.21 goals per 90 in the Champions League and 1.89 in the Premier League – with FA Cup and Carabao Cup to come

The mind-boggling projections speak volumes: Erling Haaland would finish the Premier League season on 67 goals if he maintains his current strike-rate and game time – and would extend that to 71 if he played every minute.

If Haaland sustains those metrics and reaches finals in all club competitions, the 22-year-old would register 109 goals this term – or 121 if he was never substituted.

Those figures are based on his average goal-rate across all competitions since the Premier League started, but Haaland could arguably score even more if he played against lower-tier sides in domestic cups.

Haaland is on course to almost double the all-time Premier League record of 34 goals, achieved during 42-game seasons by Andy Cole (1993/94) and Alan Shearer (1994/95) and would surpass Shearer’s record of 260 Premier League goals in fewer than four seasons.

In fact, Haaland has Dixie Dean’s English top-flight record of 60 goals in his sights – set in 1927/28 and remained unsurmountable for nearly a century.

The striker also scored his third successive league hat-trick at the Etihad during the 6-3 win over Manchester United at the weekend – moving him seven goals clear of Harry Kane in the Premier League goal chart.

So how does Haaland score his goals and how can opponents stop him?

The towering frontman has netted 14 goals from just eight Premier League games, and has also been substituted early in half of those to miss 55 minutes – scoring hat-tricks during wins over Crystal Palace, Nottingham Forest and Manchester United.

Those numbers produce a staggering league ratio of 1.89 goals per 90 minutes – more potent than any other player in Europe’s top five leagues this season to have played in excess of 144 minutes.

The chart below plots goals and expected-goal returns for all Premier League players this season and presents the scale of the striker’s early form – soaring clear in both categories.

Several forwards from opposition teams are in consistent form, most notably Harry Kane – but Haaland is doubling, and humbling, the England striker’s figures.

Some critics might claim any established forward would convert bags of goals in Pep Guardiola’s side, based on the sheer quantity of clear-cut chances they create.

However, the Norwegian has also nearly doubled his xG returns, netting six goals more than the 7.63 expected from chances presented to him – another league-topping ratio.

Additionally, Haaland has fired a league-high 20 shots on target, which means his current goal haul equates to one goal from every 1.4 shots on target – underlining the clinical finishing to date.

The shot map below highlights City’s new No 9 has converted eight of his haul from poaching opportunities inside the six-yard box, with another four coming from between the six- and 18-yard lines – while all goals were fired from the central third of the opposition box.

In terms of shot placement, Haaland has an almost perfect conversion rate when firing to the left side of the goal – netting eight of nine shots on target – and scores with around half of his attempts in the centre of the goal and to the right.

Haaland appears to be genuinely unstoppable when in full flow. His acrobatic and aerial ability, coupled with physical height, power and speed, is defying all attempts to nullify his powers – despite opponents being aware of his primary threat down the left-of-centre channel.

Haaland had registered his only league assist this term in the 4-0 win over Bournemouth with his first touch of the game, but teed up two Phil Foden goals in the rout against Manchester United to take his tally to three this term.

However, he averages far fewer touches, dribbles and final-third passes than other forwards – a deficiency City and most clubs would gladly trade for his prolific strike-rate.

Haaland clocked merely eight touches against the Cherries and currently averages at 13.6 touches per goal – which equates to scoring a goal in seven per cent of his overall actions on the ball.

He tracked back less frequently after the Newcastle game, registering merely seven touches in his own half against Nottingham Forest, Wolves and Villa combined – but dropped deeper frequently against United at the weekend.

In terms of passing, Haaland tends to drift and combine with team-mates across the width of the penalty box, with a slightly higher concentration of exchanges down left-of-centre areas – while creating his most potent chances from central areas just outside the box.

However, his pass for Foden’s second goal on Sunday was of a similar ilk to team-mate Kevin De Bruyne – bending a perfect pass behind the defensive line for the England forward to smash home and make it 4-0 before the break.

Unlike Haaland’s explosive start at the Etihad, City have traditionally started seasons slowly and this season is no exception after dropping points at Newcastle and Villa Park but there are signs Guardiola’s side have tweaked their style slightly.

The graphic below shows how Haaland averages in a similar position to the false nine last term, although this is based on his limited touches, and suggests De Bruyne is pushing slightly higher this term, while almost all other outfield players have retreated – albeit marginally.

In terms of raw attacking numbers, City have taken their goals-per-game ratio to new heights – currently averaging at 3.6 per game in the Premier League, nearly one goal more than last campaign.

However, expected goals are down – which emphasises how Haaland’s prolific form has propped up dips in creating clear-cut opportunities.

Interestingly, City are also firing fewer crosses and through-balls per game this season – two metrics many might expect to increase, to accommodate and serve Haaland.

The striker’s current goal-rate sets him on course to finish the season on 108 goals in all competitions – if he were to maintain his strike-rate, game time and reach all finals. Unlikely… but, the Norwegian is clearly set to break more records – and there is a growing sense he will rewrite the record scales entirely.

It was the 35th minute of the match and you had to concentrate to see it. Erling Haaland laid the ball off and turned. There were no cheers but that was it – his second pass of the night. Incredibly, this scoring phenomenon already had his second goal of the night by then.

It is a complete subversion of Pep Guardiola’s philosophy. A coach who has built his success on a passing game now boasts the world’s most formidable forward and yet he hardly passes the ball at all. He hardly touches it at all. Eleven touches against Copenhagen. Four of them shots.

Domestically, we are already reaching beyond the Premier League for comparisons. Alan Shearer and Andy Cole’s record of 34 goals in a single season looks so certain to go that it is Dixie Dean’s tally of 60 league goals almost a century ago that is the total to beat now.

Beyond our shores, Lionel Messi’s 73-goal season in all competitions for Barcelona is a marker of note. Such targets can no longer be seen as fanciful. Haaland did not expend much energy against Copenhagen. Guardiola might decide to reassess the need to rest him.

He had talked of rotation but Haaland has started every one of City’s 12 games so far and the postponed midweek fixture against Arsenal later this month lightens the load a little. If rested in Copenhagen, he can focus on the Premier League for much of October.

With Norway not at the World Cup, Haaland’s recuperation period can come then. How many more defences will have been on the receiving end by that stage? This does not feel like a hot streak, just the inevitable result of ice-cold finishing and a talent for the ages.