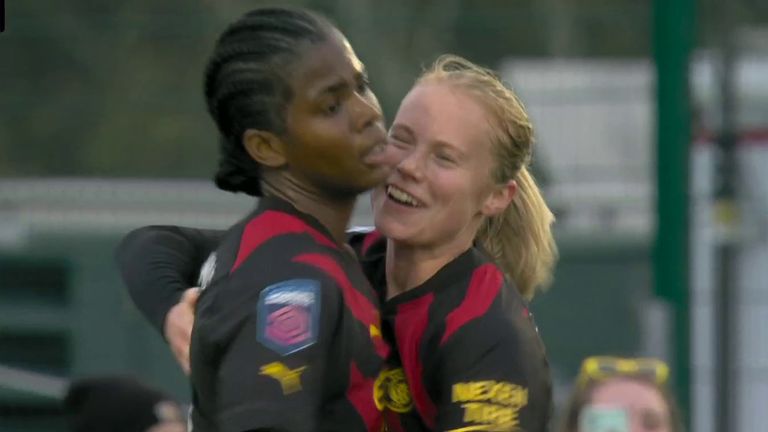 The WSL’s top scorer hit her eighth goal of the season to move fourth-place City to within three points of the leading trio.

But the visitors retook the lead four minutes into the second half as Shaw tapped in after Laura Coombs’ strike from distance had hit the post and rebounded to her.

City then held on to keep up their 100 per cent record against seventh-placed Everton, having now won all 13 of their previous WSL meetings against the Toffees.

How City made it five WSL wins in a row

City came close to opening the scoring with their very first attack as Shaw’s ball across goal found Chloe Kelly at the back post but Everton goalkeeper Emily Ramsey saved well after just 25 seconds.

But Taylor’s side did take a deserved lead after the half-hour mark as Leila Ouahabi’s ball released Shaw who unselfishly set up Blakstad to score her first league goal of the campaign.

In the 40th minute, however, Everton scored from their only corner of the first half as City goalkeeper Sandy MacIver’s punched clearance fell to Sevecke whose downward header found the back of the net.

But the dangerous Shaw put City 2-1 up in the 49th minute as the 25-year-old scored for a fifth WSL game in a row.

City came close to adding a third as they had an effort cleared off the line, then hit the post followed by a header against the bar all in the space of the 61st minute.

The dramatic flurry of activity began with Coombs’ driven effort cleared off the line by Sevecke. Then from a cross, Blakstad had a looping effort pushed onto the post by Ramsey with Kelly’s overhead kick rebound headed against the bar by Blakstad from close range.

Everton pushed for an equaliser but could not test MacIver as they suffered a third consecutive WSL home defeat of the season, while City continue their strong form after back-to-back losses at the start of the campaign.

Former England international Karen Carney told: “Shaw was the difference, definitely. She was the only one who was clinical in the final third for them. She was a threat with her hold-up play.”

Former England international Rachel Yankey told: “She’s started really well [at City]. She looked confident, she was holding the ball with clever one touches off to the side to bring people into play. I thought she looked like the bright spark today.”

Former England international Laura Bassett told: “Shaw is the go-to woman. A goal and an assist this game. She is so dangerous. You supply the ball to her and she will cause so many problems. She’s carried on the form she had before the international break.”

Taylor: Win a good test of our character

Manchester City boss Gareth Taylor told the club’s official website: “It was a game of two halves, I think it was a really good performance from us, especially off the back of the international break, you’re never too sure how much rhythm you’ll see.

“But against a really aggressive Everton press, we handled it really well, mixed our game up which allowed us to get through a lot.

“[We are] disappointed with the goal, but it was a good test of character for us coming in at half-time after playing so well.

“In the second half, we just went a little bit away from that and probably rushed it a bit but still created good chances.

“Someone said we had 25 attempts today, we need to improve on that for sure and there’s plenty to analyse.

“But I’m really pleased with how the players managed it. [Walton Hall Park] is a tough place to come.”