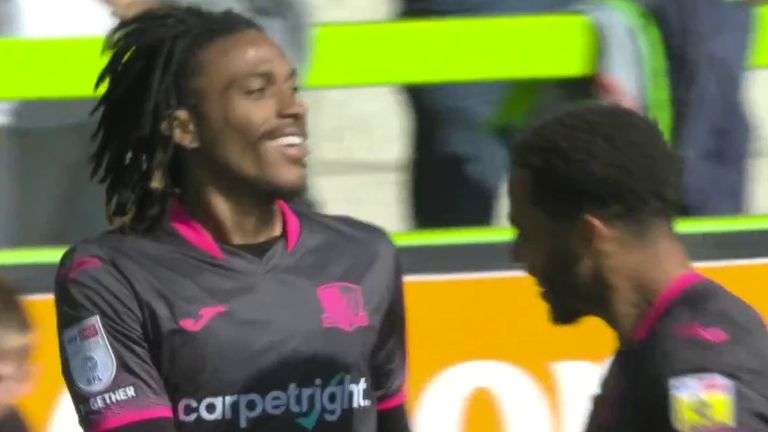 The Grecians were 3-0 in front at half-time after a blistering 35-minute period; Sam Nombe hit the opener following a defensive error (6), before Brown converted a penalty against his former side (26) and then slotted home a second ahead of the break (41).

Brown completed the rout with seven minutes to play by rattling in his second spot-kick of the afternoon after Jack Sparkes had been tripped by Dom Bernard (83).

Matt Taylor’s Exeter move up sixth to ahead of the remainder of Saturday’s schedule – reduced to just six further matches by the international break – while Forest Green stay down in 22nd with eight points from 10 games.

How Exeter cruised to victory in the Cotswolds

With this being the first meeting of the season between last season’s top two in League Two, it looked as though it would be a competitive affair, particularly with Forest Green eager to exit the relegation zone. That was soon proved not to be the case.

Exeter were in front inside six minutes when Brown seized on a loose pass from Oliver Casey and rolled the ball into the path of Nombe, who cut in from the right to fire home from a tight angle. It was the sixth time Rovers had conceded inside the first 15 minutes of a match this season.

Rovers then lost Kyle McAllister to a head injury after a collision with Sparkes and their afternoon got worse when Ben Stevenson caught Rekeem Harper with a high boot in the area, with Brown making no mistake from the penalty spot.

Towards the end of the first half, the hosts did begin to step forward and they might have halved the deficit were it not for two reaction saves from Jamal Blackman who denied Connor Wickham and Bernard in a matter of seconds.

But their efforts to get back into the game were, essentially, extinguished four minutes before the break, when Jay Stansfield led a counter, took on his man in the box and squared for Brown to slot home his second of the afternoon.

The gulf in class was evident as the second half wore on and the hosts never looked able to muster even a smidgen of a response. Luke McGee, meanwhile, was called into action to superbly deny Pierce Sweeney and Archie Collins.

And a chastening defeat was compounded inside the final 10 minutes of the match, when Brown rifled in an identical penalty to the first after Bernard’s unfortunate trip.

Player of the match – Jevani Brown

“If ever there was a complete performance from a forward, this was it. Jevani Brown looked in the mood against his former loan employers from the off and started with an assist for Sam Nombe’s clinical opening goal.

“He then scored two near-identical penalties and finished off a rapid counter-attack to complete a stunning afternoon.

“Statistically speaking, every single one of his shots was on target and he also completed 29 of his 33 passes, had 47 touches of the ball and created three chances to boot. A perfect return to The Bolt New Lawn.”

Both teams are back in action at 3pm on Saturday October 1. Forest Green travel to the Pirelli Stadium to take on Burton, while Exeter host Bristol Rovers at St James Park.