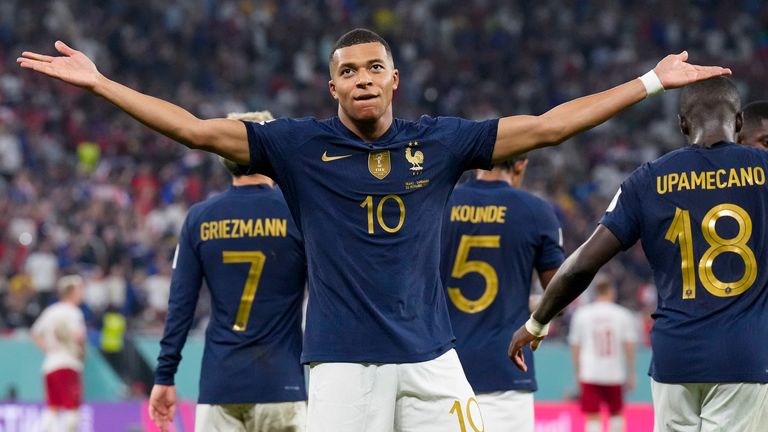 Match report as France book spot in the next round with a game to spare; Kylian Mbappe scored the second of his two goals with four minutes to go to floor Denmark

France became the first team to qualify for the last 16 of the World Cup as Kylian Mbappe’s double sent them to a 2-1 win over Denmark in Group D.

Mbappe – fresh from scoring in France’s opening night 4-1 win over Australia – scored the first of his two poacher-like efforts when converting a cross from Theo Hernandez on 61 minutes.

There was no panic from Denmark despite falling behind and they were level seven minutes later when Andreas Christensen headed home as the French wobbled defensively from a Christian Eriksen corner.

Both teams had chances to win it late on but it was Mbappe that provided the decisive moment, again showing sharp predatory skills to bundle home an Antoine Griezmann cross with four minutes remaining.

While France are the first team to qualify for the last 16, everything else is still to play for in Group D. The World Cup holders are not yet sure of finishing as group winners, but a point in their final match against Tunisia will be sufficient regardless of Australia’s result against Denmark.

If Tunisia do not win against France, Australia will progress as runners-up so long as they don’t lose to Denmark, while the Danes must win to qualify – were Denmark and Tunisia to win, the runners-up spot would be decided on goal difference and then goals scored.

Player of the match: Kylian Mbappe

How the world champions took charge of Group D…

Denmark had won the two previous meetings with France in the Nations League but put in a lethargic opening matchday showing in their 0-0 with Tunisia. It was unclear which Denmark had showed up in the early stages in a cagey encounter.

France carried the greater attacking threat but were struggling to impose Mbappe on the game. Ousmane Dembele was a constant threat down the right and he looked to have put one on a plate for Mbappe from 15 yards on 40 minutes but he blazed over the crossbar.

Griezmann had his head in his hands after the break when finishing wildly when just Kasper Schmeichel to beat – but France did not have to wait much longer to open the scoring. Mbappe linked beautifully with Hernandez down the left and showed razor-sharp finishing to prod home a close-range finish to put France in control.

Denmark had been struggling to put the World Cup holders under any pressure but levelled via a set piece – a route that led them to plenty of success in their impressive run at the last Euros. It was Christensen that was on hand to power home a header after Joachin Andersen had won the first contact.

Denmark knew a draw would leave their destiny in their own hands against Australia, however, France kept on probing and it was Mbappe that stepped up with the big moment with the clock ticking down. It was a simple goal, bundling home a Griezmann cross with his thigh from two yards out.

A goal which is going to win no awards – but the man scoring it just might.

Player of the match: Kylian Mbappe

Best player on the planet? It’s hard to argue against it, although Erling Haaland may have something to say about that. Best player at the tournament, then. That’s a safe bet.

Denmark’s Andersen actually did a sterling job of negating the threat of Mbappe out wide but a sign of intelligence within a player is the ability to change a tactic during the 90 minutes. He played more centrally in the second half and although that negated his pace and trickery having an affect on the game, his goal threat came to the fore. Two chances dropped his way and he took them both. That was the difference between the teams. It will not be the last time at a World Cup.