Frank Lampard: Everton manager insists he is confident in himself despite humbling against Brighton 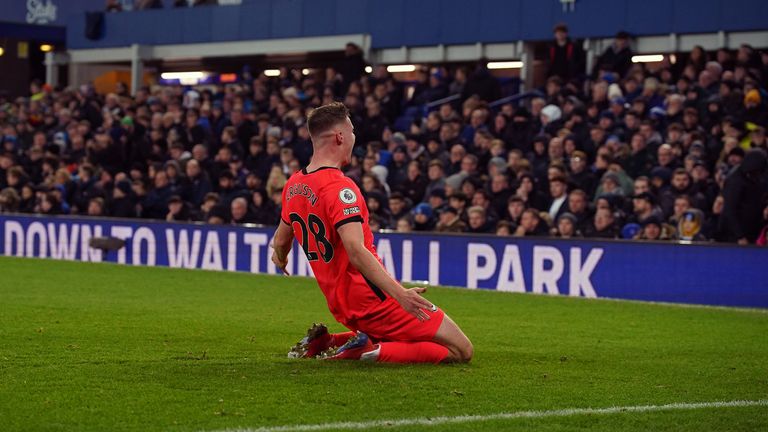 Everton were beaten 4-1 by Brighton at Goodison Park on Tuesday evening; The Toffees conceded three goals in six minutes in the second half; Everton now a point outside the relegation places with the teams below them yet to play this week

Frank Lampard insists he has belief in his managerial ability despite seeing his Everton side fall to a humbling 4-1 defeat at home to Brighton on Tuesday night.

Goals from Kaoru Mitoma, Evan Ferguson, Solly March and Pascal Gross rendered Demarai Gray’s late penalty a footnote and left the Toffees just a point above the Premier League bottom three having played a game more than the four teams currently below them.

It means Lampard has overseen just three wins in 18 league games this season, including just one in the previous 10.

Speaking after the final whistle at Goodison Park, he said: “It was very disappointing, even in the first half, I would say. [It was] a mistake from us for their goal, but I think general play was pretty even, we had our chances.

“But then three goals in six minutes, defensive mistakes from us and that finishes the game.

“After that, the game becomes a bit in-between. We get our late goal, but at 4-0 the game’s done. Those six minutes were completely pivotal to the game with individual mistakes and collective defending issues.

“We’re all in it together, so it’s not a question of anger. We’re disappointed, we want to win games.

“Since I’ve been here I’ve been in a relegation battle [both last season and this season]. I can’t control the talk but I don’t focus on it.

“I’m very confident in myself but I can’t predict the future. It’s Manchester United [in the FA Cup] next and that’s all we can look at.”

“I’m a Premier League football manager, there’s pressure in the job wherever you are. There’s always expectation, parameters, things that you want to get to. There’s constant pressure.

“I can only focus on what I can control.”

And though he refused to go into detail, Lampard hinted at the fact he would be looking to strengthen his squad in the January transfer window.

Campbell: This is not Lampard’s team

Former Everton forward Kevin Campbell believes that, despite struggles this season, Frank Lampard must be given more time and backing in the January transfer window.

He believes another manager coming in would not have the squad they want or need, thus continuing the cycle of poor results for Everton.

After watching the game on Sky Sports News, Campbell said: “I fancied Everton to do something. Up until half time, Everton were still in it. They came back at Brighton, had a couple of chances.

“But six crazy minutes in the second half, it goes from 1-0 to 4-0 and you just can’t do that in the Premier League.

“I think the relationship between Lampard and the fans is there, but there are going to be questions.

“You have to start questioning if Lampard is the right man for the job, of course you do. I still think he’s never been backed, this has never been his team.

“If you do pull the trigger and sack him, then you’re bringing in someone else to do the same thing again. So where do you stop it? Give him the opportunity to build something.

“[The situation] needs smart minds. It needs a calmness about what’s going to happen.

“We know what the issues are and there are definitely things Everton need to do in this January transfer window. There needs to be some serious changes, some refurbishment of that squad and Frank Lampard needs to demand it.

“I think he deserves longer in the job. There needs to be some changes going on within the club. He’s not been backed fully and he needs to be.”