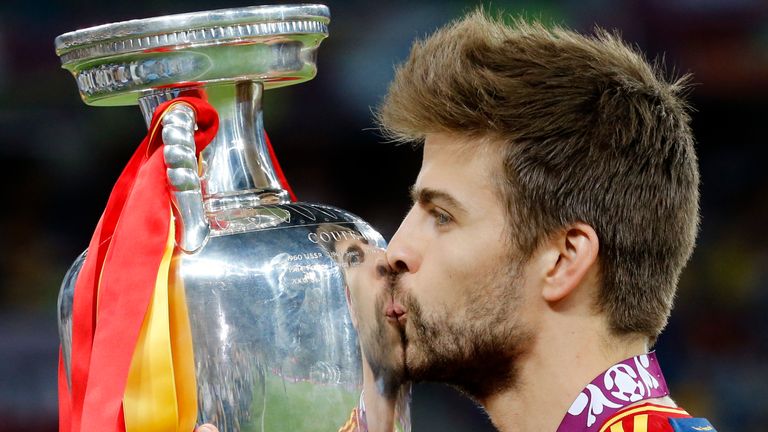 Gerard Pique has announced he will retire after Barcelona’s La Liga game against Almeria on Saturday; 35-year-old won the World Cup and European Championship with Spain; “I’ve always said that there would not be any other team after Barca – and that’s how it will be”

Gerard Pique has announced his retirement from professional football and says his final game will be Barcelona’s match against Almeria at the Nou Camp on Saturday.

The 35-year-old, a three-time Champions League and eight-time La Liga winner with boyhood club Barcelona, revealed the news in a video message posted on his social media.

“And now that [this] kid’s dreams have come true, I want to tell you that I’ve decided that now is the time to bring this journey to its end.”

Pique, who won 102 caps for Spain and helped them to victory in the 2010 World Cup, has become a peripheral figure for Barcelona this season, making only five starts.

However, the former Manchester United defender wants his boyhood club to be his last, saying: “I’ve always said that there would not be any other team after Barca and that’s how it will be.”

Pique finished his statement by hinting at a future return to the club in a non-playing capacity.

“This Saturday’s game will be my last at Camp Nou,” he said. “I will become a regular fan. I will support the team. I will pass my love for Barcelona to my children.

‘A Barca member since birth’

Following his decision to bring his playing career to an end, Barcelona described Pique – who was born in the city and whose grandfather was on the club’s board – as a “member since birth”.

He came through the famed La Masia academy but made his debut for United in 2004 after moving to Old Trafford as a 17-year-old earlier that year.

Pique won the League Cup, Premier League and Champions League under Sir Alex Ferguson but made only 23 appearances during his four-year spell in England and eventually returned to Barcelona under the newly-appointed Pep Guardiola.

Pique remained a vital member of the Barcelona side following Guardiola’s exit, winning another 13 major trophies in the 11 years since the manager left the club.

The 35-year-old was also central to Spain’s success and played every minute of the 2010 World Cup final win over the Netherlands and the 2012 Euros victory against Italy, before ending his international career after the 2018 World Cup.