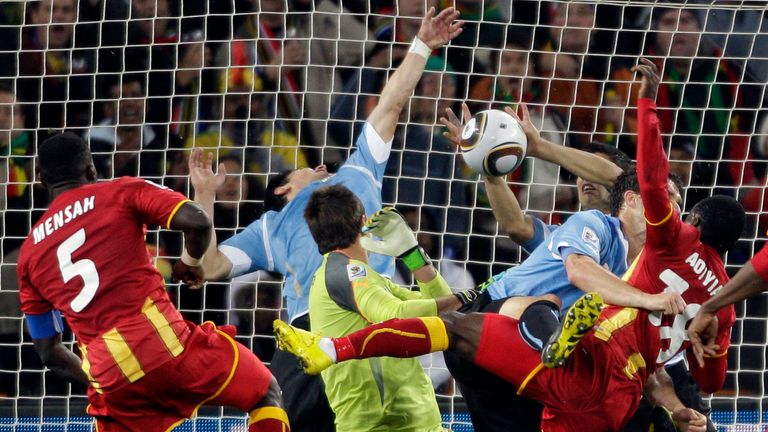 Former Ghana midfielder Derek Boateng on swapping shirts with Luis Suarez as the country prepares for their World Cup grudge match against Uruguay. The striker’s late handball denied them a place in the 2010 semi-final in dramatic circumstances…

Image: The moment that Uruguay’s Luis Suarez stopped the ball on the line in the 2010 World Cup quarter-final against Ghana

The ball is going in and Ghana are about to become the first African team to reach a World Cup semi-final. There is no way back for Uruguay. Not in the last moments of extra-time. But Luis Suarez is about to change things with one of the most famous handballs in history.

That instinctive action provides the delicious backstory to one of football’s more unlikely rivalries. Twelve years on from South Africa in 2010, Ghana and Uruguay are reunited and once again World Cup progress is on the line. Once again, Suarez stands in the way.

Derek Boateng was on the bench for Ghana when the drama unfolded in Soccer City, Johannesburg. He watched on as Suarez was red carded, saw Asamoah Gyan miss the resulting penalty and was helpless as the subsequent penalty shootout was lost.

“All the fans are talking about revenge, revenge, revenge. But I do not believe in revenge in football. We just have to go there and play our game, stick to our plan, do the right things at the right time and win the game… But the fans have a different opinion to us.”

Boateng’s wife among them, it seems.

Some years later, the rest of the world having long moved on, Boateng was playing for Eibar against Suarez’s Barcelona. “After the game I changed my shirt with him, so I brought the shirt home and I put it in the laundry and my wife saw it,” he recalls.

“I was sitting in the sitting room watching the TV and she came in front of me and asked me, ‘So, of all the players you were playing against you could not see anybody to change the shirt with, only Suarez?’ I said, ‘Come on, this is nothing, it is a football match.’

“I don’t have anything personal against him. A lot of people in Ghana still hold that grudge but for me, no. I don’t hold anything against him.” Many others see the situation rather differently. Boateng’s wife included. “She asked me to take it out of the house.”

Suarez’s exuberant celebrations on the touchline did not help the mood, then or now. An instantaneous national grief had engulfed the Ghanaian people and here was the man whose foul had caused it, revelling in the mood. It was understandable. It was painful.

But how significant will it be when Group H reaches its conclusion on Friday? A draw might be enough for Ghana but Uruguay must beat them to have any hope of progressing. Do not bet on there being too many cool heads in Accra but they will be needed in Qatar.

“The players there now were not even playing in the 2010 World Cup. The only player there is Andre Ayew. He is the only one who went to South Africa. The rest of them, I know they are going to play their normal game and show they can win the game.

“I hope we don’t think about revenge. I hope we just think about the game. We have an advantage over Uruguay. They have to win, so they will come hard at us. They will use all their experience so we need to be brave and just move the ball and stay compact.”

Whether this Ghana can do that is unclear. They came into this World Cup as the lowest-ranked team in the tournament after a miserable Africa Cup of Nations at the start of the year. Drafting in Inaki Williams, Mohammed Salisu and Tariq Lamptey has helped.

It is asking a lot to expect them to gel quickly. The circumstances were different in 2010. Rather than crashing out of the AFCON, that team had reached the final. Seven of the starting line-up from that game also started in the World Cup quarter-final.

“In our time we had a really solid squad. Even if you see our bench, players were playing regularly for their clubs in top leagues. We had a very strong team. When I am in Ghana, people always say, ‘Derek, your team and this team are different.’

“But I say to them that our time has passed. This is their time now. We have to support them. We have to do everything in our power to support them so they can achieve their dreams because they look up to us. We are the old players.”

But does he not wonder what might have been? Had Gyan’s penalty been hit a little lower and found the net then Ghana would have been through to the last four of the World Cup. Only an unconvincing Netherlands side could have kept them out of the final then.

“I always say that if an African country wins the World Cup, that moment is supposed to be. Everything happens for a reason. That day was not our day. Asamoah was the only player who had been taking the penalties. He had been taking them and scoring.

“I do not know why he missed that penalty but it is a game and in this game, that happens. Sometimes the best players in the world make mistakes. It is football. Now we are in the World Cup again and we are hoping we can do some miracles.”

As for Suarez, they can only hope he does not deny them again. Did Boateng ever do as his wife had instructed and remove a certain garment from the property? “I hid the shirt. I have just put it on the wall of my house now. In the games room. She doesn’t go in there.”