The factors behind Harry Kane’s failure from the spot 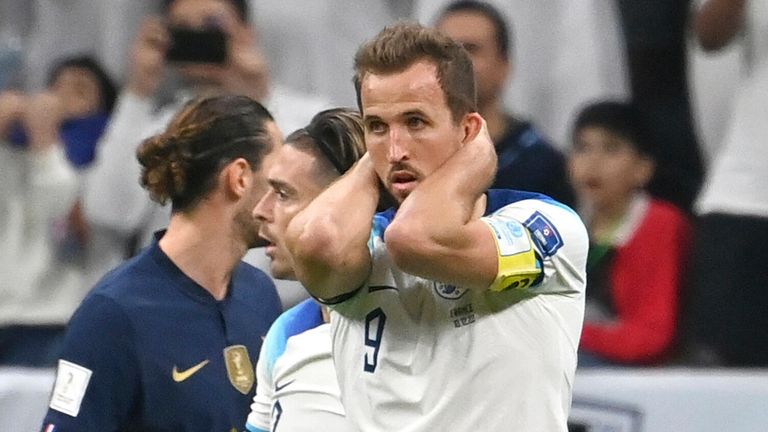 Penalty expert Geir Jordet on Harry Kane’s missed penalty for England against France: “He’s alone and a bit unprotected, even though the French players are not very hostile at that point. Mason Mount and then Jude Bellingham step up, but it could also add to the problem.”

The world seemed to stand still.

Harry Kane lifted the top of his shirt above his chin, as the dawning realisation set in. Six minutes from time, an equaliser on the line in a World Cup quarter-final, he’d missed a penalty.

England captain Kane has missed penalties before, but if anyone was reliable on the big stage, it was him. He had already levelled once already against France, the reigning champions.

Much has been said about the 29-year-old’s record in games where he has taken two penalties – that someone else should have taken the second, that he should have smashed it down the middle.

“I’m always someone who prepares for getting one or two penalties in a game, I always have an idea of what I want to do,” Kane told ITV after the game.

Interestingly, he has some very similar recent form. Less than two months before the World Cup quarter-final, he scored one penalty in a Champions League game against Frankfurt before lifting the other just over the bar.

Sound familiar? Not so much was made of the miss that evening as Tottenham were already 3-2 up in injury time, held on for victory and took a big step towards qualifying for the last 16, so it was quickly forgotten.

Were both those misses because of Kane’s fear the goalkeeper knew where he was aiming? Or was there more to it?

Geir Jordet, one of the leading authorities on penalty technique and research, has worked with top-flight clubs and international teams to enhance their chance of success from 12 yards.

He told Sky Sports Kane’s technique was nothing out of the ordinary for his usual preparation, something which can significantly change for a nervous penalty taker, and that external factors may have come into play for the England captain.

He said: “I looked at the penalty, the kick itself, trying to think about the dynamic between Kane and [Hugo] Lloris, also have been looking at his pre-shot behaviours.

“I couldn’t really find anything that I thought was noteworthy. That doesn’t mean that there’s nothing there. Because obviously, he did something that he doesn’t usually do. Does he overcompensate because he’s facing his club team-mate? It’s not just Lloris who knows where he puts his penalties, it’s the whole world.

“It was interesting to look at the environment that was there. The kind of communication that took place, the way his team-mates backed him up. He had team-mates with him for both kicks, but it was just different.

“Jordan Henderson is a world champion at chaperoning a penalty taker. No one does it better than he does. For the first penalty, he grabbed the ball and basically escorted Kane into the penalty area. It felt like a father sending his son off to school.

“Henderson was then substituted off just before the second penalty – and that became different. At first, Kane was on his own, which doesn’t need to mean anything, he’s used to doing it alone and it’s not something he’s aware of. But it could have.”

Former Germany striker Jurgen Klinsmann has said he felt the wait from the initial foul, then the VAR check, and finally the malaise surrounding the penalty contributed to the penalty miss.

Without Henderson’s calming influence Jordet felt Kane’s England well-meaning team-mates may have contributed to the problem.

He said: “When I look at the details of this, I do get the feeling he’s alone and a bit unprotected, even though the French players are not very hostile at that point. Other players have been much worse. Mason Mount and then Jude Bellingham step up and do their best to support Kane and protect the penalty spot.

“It could also add a little bit to the problem, or at least a bit of chaos. There’s a little back and forth after that, contrasting to how Henderson was very quiet, subtle but totally present. He was totally there. It’s hard to use science, these things become an art.”

Even if Lloris’ advantage over other goalkeepers in terms of insight into Kane’s penalty technique was in reality negligible, penalties are as much about psychology as ability.

And had the worry crossed the striker’s mind for a moment, Jordet told Sky Sports, it would have served as an advantage to Lloris.

“In my experience, every little incident or additional feature in a penalty situation normally favours the goalkeeper,” he said. “When something happens leading up to a spot kick, if there’s some kind of history there, a special something, it will give the goalkeeper a bit of an edge. Because the expectation is always that the penalty taker will score.”

One positive of Kane’s build-up came ahead of the first penalty, which had ramped up the tension around the watching English public – but served him well in beating his club colleague from 12 yards.

The striker purposefully walked over to the ball after he had first placed it down, picked it up and re-spotted it before finally firing home.

At the time, it looked like there was something wrong. Was he nervous? Distracted by the ball? If anything, it was a mark of control.

“It was quite an unusual scenario,” Jordet said. “I haven’t seen much of that, a player deciding to replace the ball. It happens when referees ask a player to do it, and that normally results in the performance of the penalty taker dropping by around eight per cent.

“But that’s an external distraction – this is different, he goes up to the ball and decides to move it, which is similar to what Erling Haaland does.

“It indicates a player taking control of a situation, and once the whistle goes the time he takes before striking the ball was well inside his normal range – it was slightly quicker for the second one, but still within the range.”