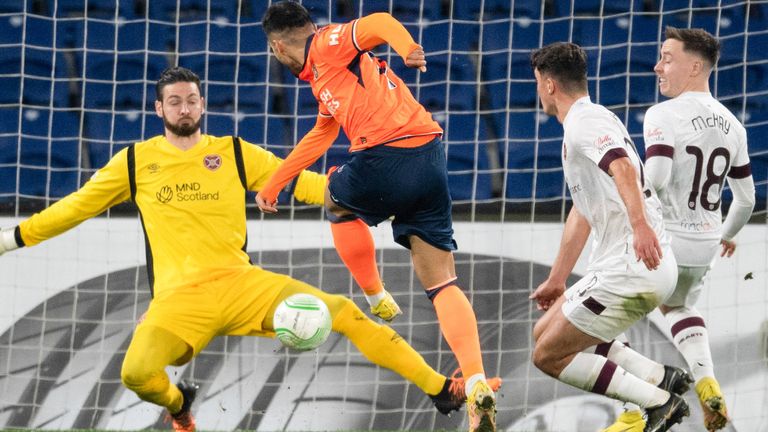 Match report as goals from Youssouf Ndayishimiye, Serdar Gurler and Berkay Ozcan gave Istanbul Basaksehir a comfortable win over Hearts; Nathaniel Atkinson scored a late consolation goal for the visitors, whose exit from the Europa Conference League had already been confirmed

Hearts’ Europa Conference League campaign ended in defeat as Robbie Neilson’s side fell to a 3-1 loss away to Istanbul Basaksehir.

In the final Group A fixture in Turkey, Youssouf Ndayishimiye headed in a corner after just four minutes and, while the visitors played their way back into the game, they fell further behind in the 33rd minute to a Serdar Gurler goal following a mistake by goalkeeper Craig Gordon.

Substitute Berkay Ozcan drove in a third in the 64th minute moments after coming on, with Hearts defender Nathaniel Atkinson scoring a consolation goal in the 90th minute.

The home side, who had won 4-0 at Tynecastle in September, finished top of Group A, with Fiorentina progressing as the second-placed side.

With several key players still out injured and third-placed Hearts having no chance of getting out of the group, it was a much-changed side that started the game.

But Gordon kept his place in goal, which meant he matched the records of fellow goalkeeper Henry Smith and ex-skipper Steven Pressley by playing 22 games in European competition for the club.

Gordon’s goal was put under threat quickly by Basaksehir, with Stefano Okaka sliding a shot past the post from 12 yards after only 90 seconds.

The Edinburgh side failed to heed the warning and soon afterwards Ndayishimiye had all the time and space he needed to head past the helpless Gordon from a Deniz Turuc corner.

Hearts responded impressively and Euan Henderson drove over from 20 yards as the visitors put their hosts under pressure all over the pitch. But, just after the half-hour mark, Gordon rushed from his goal to prevent Okaka getting on the end of a long ball and failed to connect properly, allowing Gurler to take his time before firing into the net past defender Toby Sibbick, who had retreated to the line.

Basaksehir started the second half strongly and, when defender Alex Cochrane lost possession from a Gordon throw-out, Omer Ali Sahiner squared for Ozcan, who sorted his feet before hammering the ball high into the net.

Hearts kept going in an attempt to grab a goal to give their travelling fans something to cheer and they got that in the 90th minute when ‘keeper Muhammed Sengezer parried a shot from Lawrence Shankland with Atkinson on hand to knock the ball into the net.