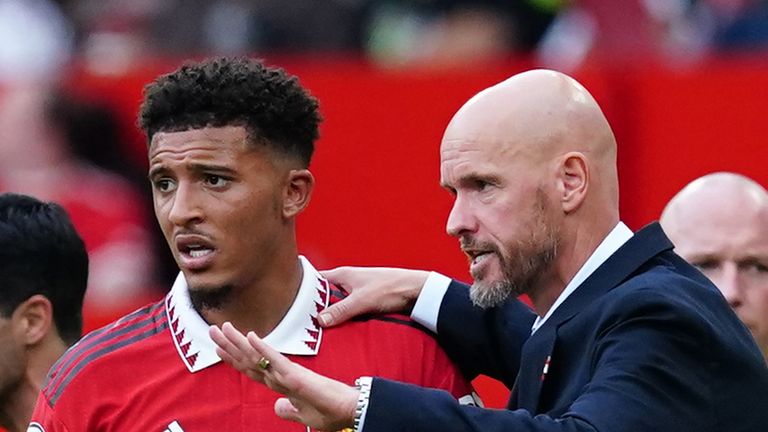 Manchester United are nine points behind Premier League leaders Arsenal after 17 games in the competition; Erik ten Hag’s side are in the Europa League knockout stages and play two cup ties in their next two games; manager says his players cannot get distracted by trophy talk

Erik ten Hag feels patience is paramount when considering Jadon Sancho as the Dutchman admitted there remains no timescale on when the winger will return to action for Manchester United.

Sancho, a £73m signing from Borussia Dortmund 18 months ago, has not featured for United since playing 52 minutes of a 1-1 draw at Chelsea in October and was left out of England’s World Cup squad.

Ten Hag said last month Sancho was “not in the right status or fitness state” and he missed United’s two-match tour of Spain, instead placed on an individual fitness programme in the Netherlands.

He has this week returned to the club’s training ground at Carrington but his involvement has so far been limited to small group sessions as the 22-year-old concentrates on his own personal plan.

Sancho’s continuing absence depletes United’s attacking options but Ten Hag accepts there are processes in place which will ultimately benefit the club and player in the long run.

“I would like to have Jadon back as soon as possible, but I can’t force this process,” Ten Hag said. “I will do everything that’s in my power but some processes you can’t force and this is one of them.

“I also have to show patience although I don’t have patience because we have a lack of opportunities in the front line, players who are available and capable to contribute not only in the Premier League but on the highest standard in football.

“Jadon is one who, when he is fit, he will contribute and we will have an extra option and so we have more chance to win a lot of games.”

Speaking ahead of Man Utd’s FA Cup third-round tie with Everton, Ten Hag said Sancho is heading in the right direction, but added there is a long way to go before he can be considered ripe for a comeback.

“With the physical, there’s also a connection of mental,” Ten Hag said. “I think he’s now making good progress on the physical part and that will help him.

“I hope he can return quickly but I can’t say how long it will be. In this moment, he is not fit enough, no.

“We have some hurdles to take. I think he’s (heading) in a good direction. I can’t force this process so I don’t do. I would be really happy in the moment if he returned in the squad for team training, that’s the next step.”

Sancho scored three times in his first eight appearances of this season, including the opener in a 2-1 win against Liverpool in August and the only goal of the game at Leicester the following month.

As for why someone of his calibre has had a marked dip, Ten Hag said: “Football players are not robots. No one is the same, I think for everyone you need an individual approach.

“Sometimes it’s good to go away from the place where you’re at daily and to get a new fight and spirit. People have a different approach and that can give you the right push to get back on track.”

Ten Hag’s side have picked up four Premier League wins in a row and sit fourth in the table, nine points behind league leaders Arsenal.

Meanwhile, the Man Utd boss has warned his players not to get distracted by talk of winning a trophy in the Dutchman’s first season in charge.

Before consecutive league games against the league’s current top two, United’s attention first turns to the domestic cup competitions, as they host Everton in the FA Cup on Friday evening before welcoming League One side Charlton to Old Trafford for their Carabao Cup quarter-final on Tuesday.

With United also in the Europa League knockout stages, the club still has four potential routes to silverware this season – but Ten Hag has called for focus amid a hectic schedule.

When asked about the prospect of a trophy in his first season at United, he said: “I don’t think about that. In this stage of the season, it’s not where you are looking at.

“You are looking at getting into a position where you can win something because there are so many games to play.

“The season is taking a long time, especially with a lot of games ahead – don’t get distracted. When you think too far ahead, you get distracted. Focus on the game, progress, the team performance and the team development. It’s all about that. There are many elements in our game that we need to improve. Think about and concentrate on that, work to make it better.”

When asked if he expected to be in such a promising position so soon into his Old Trafford career, the Dutchman added: “I think we are in a good position. We are where we want to be.

“We have to go from game to game and still think about and work on progressing and the process. It’s all about that as a team, and then the individuals. When the team is performing, the individuals get better.”

Ten Hag extended his message calling for focus to Marcus Rashford, who has three goals and one assist in United’s first three Premier League games back after the World Cup.

The England forward came off the bench to score a second-half winner against Wolves on New Year’s Eve having been dropped from the starting line-up for oversleeping and arriving late to a team meeting.

“First of all, keep the focus always. It doesn’t matter if you’re in the game or not, keep focus on scoring the goal,” Ten Hag said.

“A player like Marcus but also Anthony Martial, when they stay in the game mentally, focused with 100 per cent concentration, they have always the skills and need one moment to change the game in a positive way.

“If he [Rashford] develops that skill, I think he will score more goals and contribute to a successful season.”

With Sancho still working towards full fitness, Ten Hag also addressed the possibility of bringing in a new forward in the January transfer window.

We revealed United’s desire to bring in a forward, though a loan deal is the most likely scenario in this transfer month.

“We always have to look for that,” Ten Had said about new signings. “We push the players, good is not good enough. But also in the organisation we have to push each other.

“When there are opportunities in the top, you have to be ready for it. My focus is on being ready to get a better team, to improve the team.”