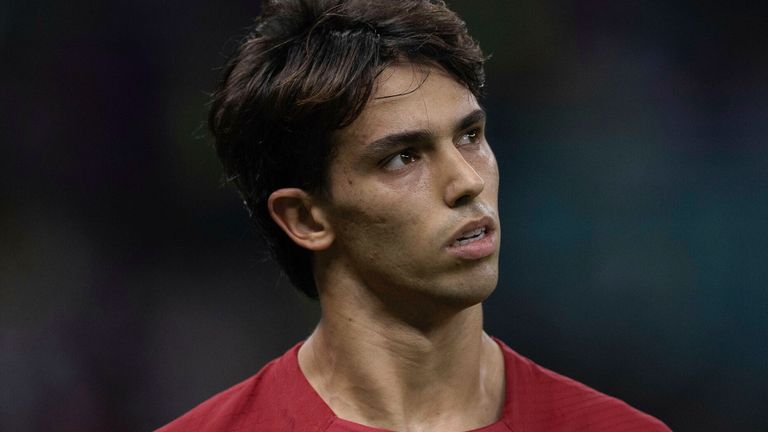 Chelsea set to beat Man Utd and Arsenal to the signing of Joao Felix; Atletico and Portugal forward could become Chelsea’s fourth January signing, after Benoit Badiashile, David Datro Fofana and Andrey Santos; Blues need to boost an attack that has scored just 20 in 17 league games

Joao Felix has flown to London for his Chelsea medical ahead of a loan move from Atletico Madrid until the end of the season.

The Blues, who are set to beat Premier League rivals Manchester United and Arsenal to the signing of the Portugal forward, will pay an €11m (£9.69m) loan fee plus his wages.

Felix would provide a much-needed boost to head coach Graham Potter’s attacking options, with his side scoring just 20 goals in 17 Premier League matches this season.

Despite the transfer window only being open for just over a week, Chelsea have already been active in January, signing Benoit Badiashile, David Datro Fofana and Andrey Santos.

Potter will hope their arrivals can help to improve his team’s form, with just one win coming from their last seven matches in all competitions.

Chelsea are currently 10th in the Premier League – 10 points outside the top four – and have already been knocked out of the FA Cup and Carabao Cup.

Image: Felix was part of the Portugal squad at last month’s World Cup

The west London club’s only realistic remaining hope of silverware this season is in the Champions League, where they face Borussia Dortmund in the last 16 next month.

Felix has just seven LaLiga starts for Atletico this season but he was named in the starting XI for their 1-0 defeat at home to Barcelona on Sunday.

However, the LaLiga side are prepared to let Felix – who has five goals and three assists in all competitions this season – leave on loan in January because of his difficult relationship with manager Diego Simeone.

“You’ve got to factor in Felix’s wages. He earns more than £250,000 per week so Chelsea would have to cover his wages as well.

“Chelsea have been criticised because they’re spending so much money in the transfer market, but they do have a strategy this month.

“What they want to sign is a wide player – I think that will be Felix. Ideally, they would like a right-back as well, and a midfield player.”

‘Felix deal works for both parties’

“This deal would probably work for both parties. Chelsea would probably look to the summer when they can reassess and see what other options are out there.

“For Atletico Madrid, they paid close to £120m for Felix. If they were to include an option price now or sell him now, they wouldn’t get anywhere near that money.

“It’s likely they won’t get anywhere near that money when they do eventually sell him, but if he goes to Chelsea and performs really well for six months, he can then go back to Atletico with three years left on his contract and maybe his value is higher.

“Arsenal wanted to sign him as well, and Manchester United were looking at him.”

‘Felix could help but next season should be the focus’

Owner Todd Boehly has already shown he’s more than willing to spend in a bid to improve Graham Potter’s squad, and attack is clearly an area that needs addressing.

Finding the back of the net is a serious issue, with Chelsea ranking 12th for goals scored in the Premier League, while Raheem Sterling and Kai Havertz are the only players to score more than three goals in all competitions.

The need for more goalscorers in Potter’s squad is obvious, but the lack of chances being created is arguably an even bigger issue.

Chelsea rank a lowly 15th for expected goals in the Premier League and have actually outperformed their figure of 18.81, suggesting their forwards are not underperforming as dramatically as it may seem.

Felix’s move to Atletico may not have worked out the way either party hoped, but he is a player that should be able to help with Chelsea’s issues in the final third if he hits the ground running in west London.

Despite starting just seven LaLiga matches this season, he ranks in the top 12 in the Spanish top flight for both goals and assists per 90 minutes.

Felix is also a versatile forward, capable of playing as a striker, a No 10 or on the flanks – something that will appeal to Potter, given the head coach’s habit of deploying a variety of formations.

However, questions will be asked about the decision to bring in Felix if Chelsea do not negotiate an option to buy the Portugal international as part of the loan deal.

Barring another remarkable run in the Champions League, silverware is already out of the question this season for the Blues, meaning the second half of the campaign should be about building for 2023/24.

If Felix is not going to be a part of next season, do they need him taking a place in the team of somebody who will be?

Who will be on the move this winter? The January transfer window opens on Sunday January 1, 2023 and closes at 11pm on Tuesday January 31, 2023.

Keep up to date with all the latest transfer news and rumours in our dedicated Transfer Centre blog on digital platforms. You can also catch up with the ins, outs and analysis.