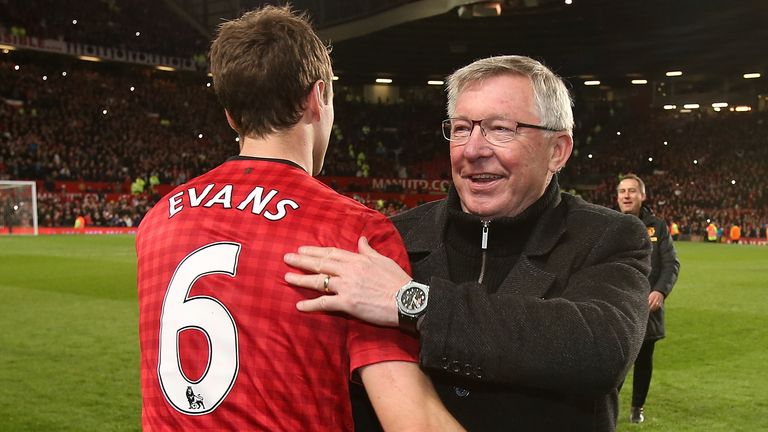 Jonny Evans will win his 100th cap for Northern Ireland against Greece in the Nations League on Tuesday; only Steven Davis, Pat Jennings and Aaron Hughes have celebrated a century of appearances at international level; Evans played 156 times for Manchester United under Sir Alex Ferguson

It was the morning after one of Northern Ireland’s most famous results and 18-year-old Jonny Evans was about to leave Belfast having been a surprise debutant at left-back in the 3-2 win over Spain.

He was heading back to Manchester United, where he had yet to make a senior appearance, knowing his career had taken a dramatic upward turn following an assured display against Raul, Fernando Torres and David Villa.

Unsurprisingly his phone lit up relentlessly with calls and messages from well-wishers but one in particular left a lasting mark on the then-teenager.

“I was on the way to the airport and Sir Alex Ferguson rang me and said I would go on and get 100 caps,” the Leicester captain tells Sky Sports News.

“So it’s always been something I’ve set my sights on. Over the years with injuries you doubt if you’ll ever get there but I’ve been fortunate to have a good spell of games over the last few years.

“I think I thought most games (after Spain) would be easy and that would be the norm,” he says with a laugh.

Evans made 156 appearances for Manchester United under Sir Alex Ferguson

Instead, Evans was part of a squad that suffered lean times when Lawrie Sanchez left before the arrival of Michael O’Neill revived their fortunes.

Under O’Neill, he achieved the lifelong dream of playing for his county at a major finals and soon found himself passing David Healy, Mal Donaghy and Sammy McIlroy in the bid to reach 100 caps.

For Evans today is that day. He had to negotiate Saturday’s game against Kosovo, and survive a physical battle against striker Vedat Muriqi without a booking, to avoid suspension for the crucial Nations League game against Greece.

“There is no better feeling than playing for your country. When you play international football you feel like you are representing other people. I think that’s the beauty of it. During the anthems you are looking for your family.

“At away games we see fans who have been coming for 10, 15 or 20 years and always stop for a chat. Some of those people coached me at younger age groups so you feel like you’re doing it for them too.”

There was no hesitation when asked about his international career highlight.

“It brought out an emotion inside me that I didn’t know was there. There were tears of happiness.

“There were friends and family who had been with me all the way. I think that’s what made it special.”

Of the male Northern Ireland players only Steven Davis, who will win his 140th cap against Greece, Pat Jennings and Aaron Hughes have celebrated the century of appearances.

Supporters will hope the 34-year-old, a man who brings a calm presence and organisation to the back line, can play on beyond the next campaign.

“After Greece there’s a big break until March. I’m going to take it game by game,” he says before spontaneously calling Josh Magennis over to free him from the interview.

In typical modest fashion, Evans prefers to focus on the team with the goal to better or match the Cyprus result to avoid a relegation play-off.

The two things we can say for certain? Evans will go down as one of Northern Ireland’s all-time greatest players. And secondly? Sir Alex Ferguson rarely gets it wrong.