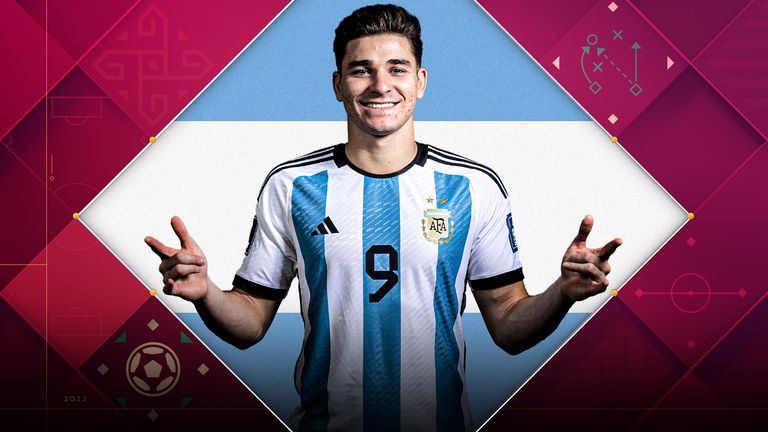 Julian Alvarez emerged as the ideal foil for Lionel Messi in Argentina’s emotional ride to the World Cup final against France. As well as scoring four goals, the Manchester City forward’s hard running has helped to bring balance to Lionel Scaloni’s attack.

Julian Alvarez started only one of Argentina’s World Cup qualifiers and found himself on the bench for their first two games in Qatar. He could end it by spearheading his country to glory having formed an irresistible partnership with Lionel Messi.

Scoring against Poland in his first World Cup start confirmed Argentina’s progression. His goal against Australia after robbing goalkeeper Mat Ryan epitomised his enthusiasm. Against Croatia in the semi-final, he underlined his importance to his team.

Alvarez scored two of Argentina’s three goals and he won the penalty for the other. It was Messi who won the man of the match award. Even the great man seemed to accept that his young partner in attack might have been the one to claim this particular prize.

“Every player did well but if I had to choose I would give this award to Julian Alvarez,” said Messi. “The match from Julian was excellent,” added head coach Lionel Scaloni. “Not only because he scored two goals, but because he helped our midfielders.”

As breakout stars go, a Manchester City striker might be too high profile for all that. But the rise has been swift. Speaking to him in the autumn, Alvarez, 22, was reluctant to commit to even making it to the World Cup when asked about his hopes for the winter.

“The squad has not even been announced, not even the list from which the squad will be drawn, but I would hope to be there,” he told Sky Sports. “Obviously, the World Cup is the biggest thing there is in football and it would be wonderful to participate.”

Alvarez has done more than participate. He has made brought balance to the Argentina attack with his running in the final third. Messi’s magic has made the difference but his now celebrated lack of movement demands more of others. Alvarez has delivered that.

At River Plate, his coach Marcelo Gallardo spoke of this habit of playing every game as if it were his first. “That is contagious.” At Man City, Pep Guardiola noted that Alvarez is “always positive” and increases the intensity of the team with his defensive work.

Whether it is drifting left or right to shut down attacks, he has been there trying to win back possession in the final third, a one-man press for Argentina. No striker has blocked more passes at the World Cup. He is the man Argentina needed. The man Messi needed.

That Argentina are a team playing for Messi has become a theme. “I would rather have won it for him than for me,” said goalkeeper Emiliano Martinez following the Copa America success last year. On the pitch, Alvarez embodies that more than anyone else.

There was a moment in the semi-final against Croatia when Messi had engineered enough space for a shot on the angle. He took it and it was saved. Had he gone across the goalkeeper or looked for the pass, Alvarez might have been able to apply the finish.

There were no complaints. Instead, as Messi reacted to the missed opportunity, Alvarez was already away, hunting down the defender trying to bring the ball away and committing the foul that prevented Croatia to counter-attack. It was typical of his attitude.

His goal against Poland showcased his quality but his first against Croatia was more typical. Alvarez almost appeared to be smiling as he bounded through, riding the ricochets. If Messi’s game is one of surgical precision, Alvarez is all endeavour, forcing the errors.

From open play, Alvarez has actually scored twice as many goals as Messi. He had the little genius to thank for setting up his second against Croatia but the relationship is reciprocal. Alvarez won the penalty that Messi scored. Their skillsets complement each other.

How thrilling that must be for Alvarez. He was three when Messi made his professional debut, five when Messi first played for Argentina and eight when Messi won Olympic gold for his country. Growing up in Colchin, watching him on television was a family event.

“We all watched football together as a family, a lot of games, and Barcelona was the one that captured my family’s imagination, especially Lionel Messi.

“It is great, of course, and very satisfying to have that dream come true of playing at the side of Lionel Messi, one of the greatest footballers in the history of the game. It is a great source of pride for me, I have to say.

“It is hard to copy him, of course. He is a unique talent. But like everyone around him, I watch every little thing that he does, every piece of skill. I try to learn and take the best from it that I can but he is a quite surprising player, not just on the pitch but off it as well.”

Alvarez might be trying to learn from him. But the truth is that it is the differences between them that have been crucial to Argentina finding the right blend. Messi’s mind and feet are without equal but Alvarez has been his legs in Qatar. Together, they can make history.