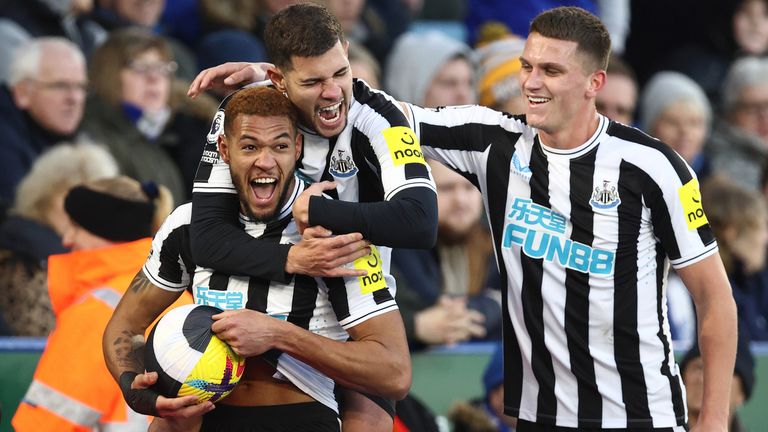 Free highlights and match report as Newcastle move second in Premier League with a 3-0 win at Leicester; Magpies scored three goals in first 32 minutes; Chris Wood opened scoring with penalty; Miguel Almiron made it 2-0 with ninth goal of season; Joelinton added third with a header

Newcastle moved second in the Premier League after a blistering first-half performance saw them win 3-0 at Leicester following the World Cup break as Miguel Almiron hit his ninth goal of the season.

The Magpies scored all three goals in the first 32 minutes in a Boxing Day victory that puts them a point above Manchester City and four points behind leaders Arsenal, although both sides have two games in hand.

Newcastle were 2-0 up after seven minutes at the King Power Stadium thanks to Chris Wood’s penalty (3) and Almiron’s cool finish (7) giving him his eighth goal in his last nine Premier League games.

Man of the match: Joelinton.

Joelinton then headed in a third from a corner (32) to put the game beyond the Foxes and record a sixth successive Premier League win – their best run since 2012.

Defeat for Leicester ends their four-game winning run in all competitions as they remain 13th.

How Newcastle picked up where they left off

It had been 45 days since both sides were in Premier League action but the two teams had warmed up nicely for the festive fixture in the East Midlands, having won their midweek Carabao Cup fourth-round ties to then be drawn against each other in the quarter-finals.

But Leicester, who were once again without the injured James Maddison due to a new knee injury, were caught cold as Daniel Amartey brought down Joelinton after just 90 seconds to give the visitors a penalty.

Wood, deputising for the unwell Callum Wilson, hammered home from the spot to give Newcastle a third-minute lead.

Four minutes later, Almiron added a second in sublime fashion as he played a lovely one-two with Bruno Guimaraes and then beautifully slotted past Danny Ward to continue his outstanding form this season.

Leicester’s only real chance of the game came in the 22nd minute as Kiernan Dewsbury-Hall played through Patson Daka but he was denied by the on-rushing Nick Pope with Sven Botman clearing the rebound off the line.

Joelinton’s 32nd-minute header from Kieran Trippier’s corner then completed the first-half demolition job for Newcastle, who have now suffered just one defeat in their opening 19 games in all competitions.

Howe: Fans dreaming about what we can achieve

“My attitude won’t change to that. I have no problems with the supporters dreaming and talking and speculating about what we can achieve and no doubt the media will, I can’t control that.

“The only think we need to be mindful of internally is just focus on what we can control and our own thoughts and actions and how we train and how we prepare. And not look too far ahead and not listen to too much news and media and just focus on our training and make sure we focus on it game by game.

“This is the toughest league in the world for a reason and our opposition no doubt will be watching us and preparing for us, so we have to be ready.”

On the performance, Howe added: “I’d say the performance was up there when you consider the opposition and the game and the break and everything that has gone into to preparing (for) this game.

“To start in the manner we did was hugely important. Credit to the players for how they have attacked their game.

“We scored some very good goals and the general mentality of the group was very, very good after the break.

“Today was a big test for us and (I’m) delighted (with) how the players started.”

“Sadly he is not near to playing yet he was out to the grass this morning, but he was still feeling pain in his knee.

“I’ll speak to the medical team in the morning and see what the timeline on it might be.

“It’s a different part of a knee, he has had it around the back of the knee, now he is feeling it around the front part. I need to listen to experts and the medical people on this and take it from there.

“This has come indirectly from maybe having issues while he was away, he is just feeling something on the front of his knee that the medics are just trying to get to the bottom of.”

Joelinton and Bruno Guimaraes both starred for Newcastle in the 3-0 win but the former just edges out his fellow Brazilian for his goal and assist.

Joelinton started and finished the victory as he won the crucial penalty for Wood’s opener and then headed in the third to make the win safe.