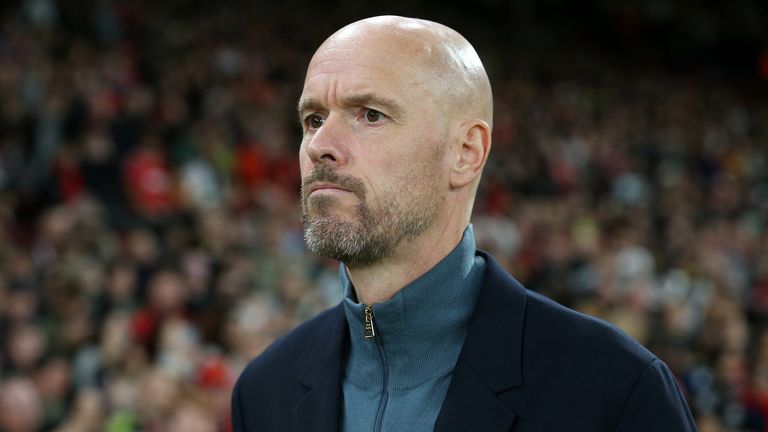 Manchester United’s focus is on next year’s summer transfer window rather than investing in January; United are looking at striker and right-back options but loan moves are more likely than permanent arrivals; there is a chance that United sign no players in January

Manchester United manager Erik ten Hag may only get loan signings in January, if the club sign anyone at all

Manchester United are focusing on loan deals in January, but there is a significant chance the club will not sign anyone next month.

A permanent deal cannot be completely ruled out, but only if a long-term target became available and that spending would form part of next summer’s budget.

As it stands, a loan move is more likely than a permanent deal – if they are to bring anyone in over the January transfer window.

United are keeping their focus on next year’s summer transfer window, rather than investing in the squad in January.

It was never in the club’s plan to undertake major spending in January having spent £230m in the summer market.

As Erik ten Hag revealed after Tuesday night’s 3-0 win over Nottingham Forest, the club are looking for a striker in January and continue to look at all options.

United were interested in PSV Eindhoven forward Cody Gakpo – but Liverpool appear to have beaten them to the Dutch forward, who arrived in England on Wednesday to complete his move to Anfield.

United also continue to keep an eye on right-back options – but any potential arrival in that position is likely to depend on Aaron Wan-Bissaka’s situation.

Wan-Bissaka started his first Premier League game since April in the win over Nottingham Forest.

Speaking about the right-back after Tuesday’s victory, Ten Hag said: “He did well. He had a difficult first half of the season, [with] a lot of injuries and illnesses.

“The break was good for him. He joined us in the training camp in Spain. You see his development. He’s doing a good job.”

Eriksen: Man United have moved on from Ronaldo

Christian Eriksen says United have moved on from Cristiano Ronaldo after their 3-0 win over Nottingham Forest.

Ronaldo’s demise at Old Trafford dominated the news agenda for several weeks following his refusal to come on as a substitute against Tottenham and his explosive TalkTV interview. His exit was agreed during the World Cup break and United have quickly moved on, showing plenty of life in attack as they put Forest to the sword on Tuesday.

Eriksen was proud to play with Ronaldo, but knows life moves on and said the mood in the camp is good.

“First of all we are sad that Ronaldo is not part of it, his legacy and his name at any club is special, for me to be fortunate to play with him in my career was very nice,” he said.

“The football goes on. You feel that the next game after, people will forget what it was like before and now our focus is really like he is not here.

“The atmosphere is good, we have a lot of people coming back from the World Cup, the last guys are coming back and everyone is coming together.

“The atmosphere is good. It helps winning games and also before we went away for the World Cup we had a few good games and good wins and it makes it easier to come back and start like this.”