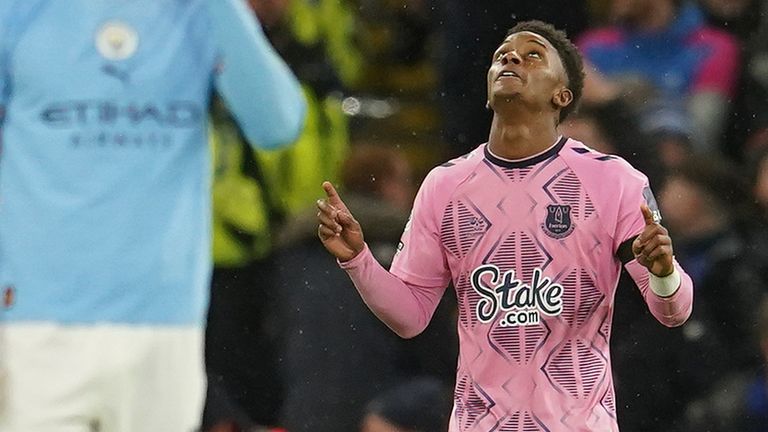 Manchester City missed the chance to move to within two points of Premier League leaders Arsenal after Demarai Gray’s stupendous finish earned Everton a battling 1-1 draw at the Etihad Stadium.

Gray’s bolt from the blue breathed life into Frank Lampard’s side and simultaneously scuppered City’s title charge on the final day of 2022.

Erling Haaland made space for himself on 24 minutes to convert Riyad Mahrez’s cross to make it an astonishing 21 Premier League goals in his first 15 appearances.

But Everton levelled with their first shot of the match in the second half as Demarai Gray regained his footing to cut inside Manuel Ajankji and find the far corner via the underside of Ederson’s crossbar (64).

The result hands Arsenal the opportunity to move seven points clear of City when they face Brighton later on New Year’s Eve, live on Sky Sports, while Everton stay in 16th, two points above the relegation zone after ending their four-game losing run in all competitions.

Man of the match: James Tarkowski.

How Lampard made his point to dent City

Lampard has come under pressure following the late home defeat to Wolves on Boxing Day, but this was a display brimming with fighting spirit that underscored the belief his players still have in his stewardship.

He made four changes to his starting line-up with some of them enforced due to illness. Anthony Gordon and Yerry Mina couldn’t shake off a bug but Dominic Calvert-Lewin’s first start since early November was a welcome boost.

Lampard called on his side to show pride and personality in their performance – but it was City who broke the deadlock on 24 minutes. Rodri won the ball back off Alex Iwobi and after Nathan Ake fed Bernardo Silva, Kevin De Bruyne combined inside with Jack Grealish before Riyad Mahrez was found in space on the right.

The Algerian dummied inside Vitaliy Mykolenko before laying the ball back for Haaland to tuck home from close range despite Conor Coady’s best efforts on the line.

By then, Mahrez had already been unfortunate not to have been awarded a penalty when Idrissa Gueye nibbled at his feet inside the box but City came close to doubling their lead on the stroke of half-time.

John Stones lost Calvert-Lewin at a Kevin De Bruyne free-kick and thudded his header against the post. From the loose ball, Haaland caught Mykolenko with a late challenge which earned the Norwegian a booking despite Jordan Pickford leading the protests for stiffer punishment.

There was a six-minute delay early in the second period after a malfunctioning ear piece in one of the assistant referees, but after the technical glitch it was Everton who dealt an unlikely hammer blow. Rodri was slack in possession as Gueye fed Gray down the left. The returning winger used Mykolenko as a decoy to drift inside Ake before unleashing a stunning strike beyond Ederson.

It was only Gray’s second Premier League goal of the season but he is a player capable of providing moments of brilliance, and this was a late Christmas gift to those embattled Everton supporters. It was his first away league goal since August 2021 against Brighton.

Frustration started to build for the hosts as Everton looked to play down the clock and Tom Davies replaced the impressive Gueye.

With seven minutes remaining, Pickford made a brilliant save to deny Mahrez’s deflected effort. The danger was still not averted as Rodri’s shot from a cutback was brilliantly blocked by James Tarkowski.

Eleven additional minutes were signalled – and in the final seconds of that allotted timeframe it was the unmarked Rodri who rose to inexplicably head Mahrez’s cross wide as Everton held on for an unlikely point.

City have now failed to win back-to-back home league games for the first time since May 2021, when they lost against Leeds and Chelsea.

Ben Godfrey told Sky Sports “It’s massive. I think we showed our character today. We’ve always had a team spirit. That’s the standard. Work rate and togetherness. It feels good to get a point.

“It’s always going to be tough. I don’t need to tell you Erling Haaland’s a good player. I just had to do my job. Yeah of course he was [upset]. You could see his reaction. He got his goal and is always causing people problems and it’s those challenges you have to look forward to.

“You come here and give yourself a chance to score and we did that. I’ve seen [Demarai Gray] do that day in, day out in training. It’s nothing less than he deserved.

“To be 1-0 down at half-time it’s easy to let that get to you but we knew we would get a chance. We’ll take the point.

“The Boxing Day result was upsetting. To concede so late on was never nice. That highlights our character to have such a disappointing result then come to a place like City and get a result.”

Manchester City are back in action on Thursday, January 5, when they travel to Chelsea; kick-off 8pm.

Meanwhile, Everton’s next assignment is on Tuesday, January 3. They host Brighton at Goodison Park; kick-off 7.45pm.