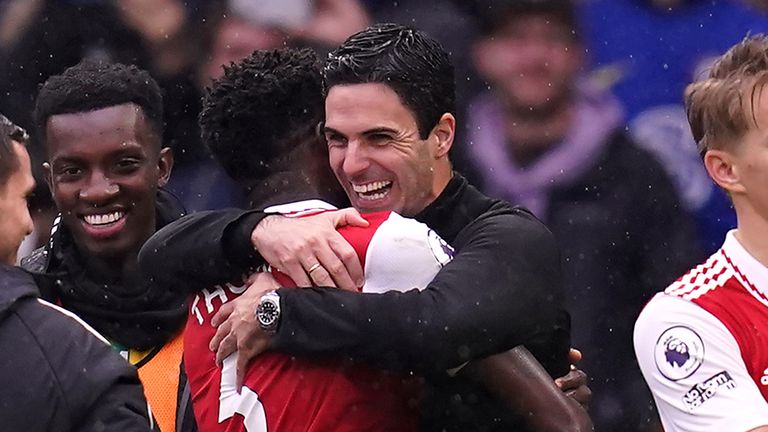 Arsenal manager Mikel Arteta had previously been coy on the Gunners’ title chances but admitted they are in the race; the Gunners won 1-0 at Chelsea to re-establish their two-point lead at the top of the Premier League; Arteta says Arsenal should respect Man City’s recent record

Mikel Arteta has admitted Arsenal are competing for the title after their win at Chelsea – but did call for respect towards Manchester City’s recent record in English football.

Since the start of the season, Arteta has been coy about the Gunners’ chances to win the title despite 10 consecutive rounds of Premier League fixtures at the summit – but Sunday’s 1-0 win at Chelsea courtesy of Gabriel’s second-half goal appears to have changed his stance.

Speaking in his press conference after Arsenal re-established their two-point lead over City at the top of the table, Arteta said: “We are [competing for the title] today, but tomorrow is difficult.

“Just look at the last six years what Manchester City have done. With the best manager and best team in the world, they’ve shown it consistently in every single competition.

Arteta – who took charge of his 150th game at Stamford Bridge on Sunday – was particularly pleased about the maturity his side showed in west London. The Gunners were relatively untroubled at the back and could have scored more against Chelsea had Gabriel Jesus had his shooting boots on, with missed chances in either half.

Asked to compare this performance with the 3-1 defeat at Manchester United in September, Arteta said: “We like discipline, the discipline that is necessary in certain moments. To know what you have to do, because if not you get punished.

“I think we learned our lesson really well because we played really well there [at Old Trafford in September] but it was not enough to win and that’s what top teams do.

“What is fantastic to see the team taking another step. Today we were under pressure, we lost our [top] spot [to Manchester City on Saturday] and we prepared the game to come here and win but coming to win here is a different story. I’m happy we’ve done that.”

Potter: Arsenal ahead of Chelsea in progress | ‘We’re not in a good moment’

The result in west London has compounded Chelsea’s woes, with Graham Potter’s side remaining in seventh place, 13 points off Arsenal after just two points from their last four games.

Potter admitted Arsenal deserved to beat his side on Sunday, while he conceded the Blues are not in a “fantastic moment”.

“We huffed and puffed but I thought you could see the difference between the two teams in terms of confidence, the points they’ve got, structure and their work together,” Potter said.

“We’re not in a fantastic moment and, as much as it’s not nice to say, I think Arsenal deserved to win the game and were the better team overall. We have to take that and use it as motivation to improve.”

Potter insisted Arsenal’s superiority came as a result of numerous factors, including that Arteta has been given time and resources to build his side since taking charge in December 2019.

“I don’t think it’s one thing,” said Potter. “Clearly their confidence is higher – they’ve got the points, they’ve got off to a really good start, they’ve been working together for three years or so. They’ve got an understanding of each other while we’re at the start of our process.

“We’ve got a few injuries to key players that they’ve managed to stay clear of. So it’s not one simple solution unfortunately.”

Analysis: Arsenal’s faith in Arteta is paying off

A lot of people would never have thought that Mikel Arteta would have reached 150 games as Arsenal manager.

Go back one season and many didn’t expect to see Arteta at the club when they were bottom of the table with zero wins from their opening three games. Two seasons ago, they were just above the relegation zone at Christmas and failed to qualify for European football that term.

But Arsenal stuck with their young Spanish manager and perhaps it’s apt that Arteta picked up one of his biggest wins as Gunners boss at a club that has a long history of hiring and firing managers at will.

Chelsea manager Graham Potter recognised that after his side were beaten by Arteta’s Arsenal. “If you look at the Arsenal story of where they are now compared to one year, two years ago it’s slightly different,” he said. “I’m sure at times Mikel is getting pelters and that’s how it is. That’s the job and that’s life.”

Arsenal have supported Arteta through some challenging moments, off the pitch as well as on it. The club hierarchy standing by their manager during the Pierre-Emerick Aubameyang saga has paid off – the now-Chelsea striker looked way off the pace against Arsenal’s defenders while the fans chanted Arteta’s name every time he touched the ball.

Arsenal now sit top of the Premier League table with Arteta being a standalone young manager who has yet to face the chop. Frank Lampard, Steven Gerrard and Ole Gunnar Solskjaer – all deemed project, long-term managers – have lost their jobs in recent seasons while Arteta stands alone at the top.

His Arsenal side looked solid at the back but creative going forwards – as they have done all season. Perhaps Premier League owners – including a certain Mr Todd Boehly at Chelsea – will be taking notes as to what’s happening in north London.