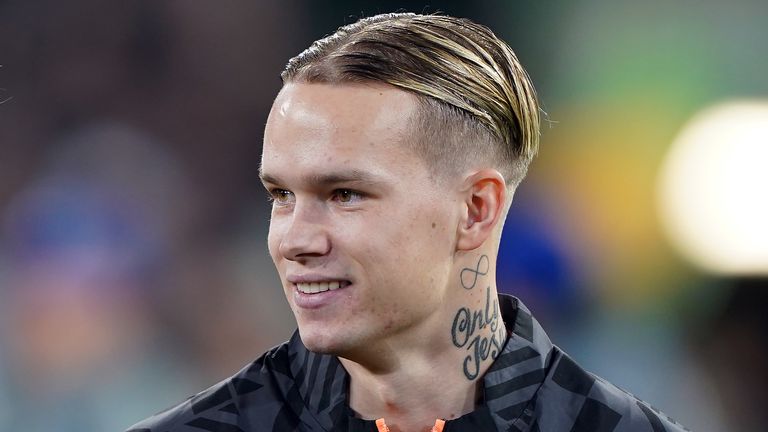 Chelsea have jumped ahead of Arsenal to sign Mykhailo Mudryk for £88.5m on an eight-and-a-half year deal from Shakhtar Donetsk; Ukraine international has been described as “the best in Europe in his position” after Kylian Mbappe and Vinicius Junior

Shakhtar Donetsk’s Mykhailo Mudryk emerged as a target for Arsenal, but has now signed for Chelsea

At the start of last season he was an unknown outside of Ukraine with a transfer value of under £1m. Now he is one of the most coveted young players in Europe. Following an explosive rise, Mykhailo Mudryk looks destined for big things.

The 22-year-old, who showcased his thrilling speed and one-on-one ability in the Champions League group stage earlier this season, has been described by Darijo Srna, Shakhtar Donetsk’s director of football, as “the best player in Europe in his position” after Kylian Mbappe and Vinicius Junior.

There may be a hint of exaggeration to that statement but Srna is not the only one to hold Mudryk in high regard.

Shakhtar have been adamant about securing their huge valuation of the player – “if someone wants to buy Mudryk, they must spend a lot of money and respect our club,” added Srna recently – but is the hype justified?

Mudryk has long been viewed as a player of huge potential in Ukraine, where he started out in Metalist Kharkiv’s academy before moving to Dnipro and then Shakhtar, but it took longer than many expected for him to start flourishing.

Paulo Fonseca, Shakhtar’s former manager, saw his potential during his time in charge, bringing him into the first-team fold and handing him his senior debut at the age of 17 in 2018.

For all Mudryk’s talent, though, his attitude caused doubts.

“He sometimes didn’t hear what the coach said to him,” reflected Shakhtar captain Taras Stepanenko recently. Fonseca, meanwhile, aired his own concerns after a friendly win over Azerbaijani side Qarabag in January of 2019.

Mudryk was sent on loan to Ukrainian Premier League rivals Arsenal Kyiv only a few weeks later. Another loan spell, this time at Desna Chernihiv, would follow that, with Shakhtar hoping greater exposure at senior level would help him mature.

But it was only after the appointment of Roberto De Zerbi, now of Brighton, in the summer of 2021, at a time when Mudryk was valued at under £1m by Transfermarkt, that his fortunes – and indeed his attitude – began to change back at his parent club.

“Everybody knows Mudryk is an amazing talent but not a lot of coaches can find a connection with him,” explained Srna, before adding that one of De Zerbi’s first acts in charge of Shakhtar was to pick up the phone to the on-loan youngster.

“He told him, ‘You will become a player with me, or you will not be a football player,'” added Srna of that De Zerbi phone call. “From that day, Mudryk changed things completely.”

“I need not only to win the league and the cup, as well as to play well in the Champions League, but also to educate young players,” he said. “Mudryk is one of the best young footballers in Europe. If I don’t bring him to a high level, I will consider it a personal defeat.”

Mudryk was one of several Shakhtar academy products thrown into the team by De Zerbi and he rewarded his faith emphatically, the winger becoming a regular starter before the 2021/22 campaign was disrupted by the pandemic, and subsequently breaking into Andriy Shevchenko’s national team.

The doubts over Mudryk’s attitude swiftly disappeared and soon his ability was coming to the fore.

Indeed, since his breakthrough at the start of last season, he has scored nine goals and provided 13 assists in 23 Ukrainian Premier League appearances – and that despite the upheaval caused by Russia’s invasion of the country as well as the pandemic.

The numbers are impressive but it is on the European stage that Mudryk has really turned heads.

He was used primarily as a substitute during Shakhtar’s group-stage campaign last season, but he certainly made his mark on his first start, his eye-catching display in a 2-1 defeat to Real Madrid earning him an ovation from the home fans at the Bernabeu when he was substituted in the second half.

It was a significant moment in Mudryk’s rise to prominence and this season he has continued to grow in stature, starting all six of Shakhtar’s group games and contributing three goals and two assists, a combined total bettered by only seven players in the competition so far.

Celtic will not remember their meetings with him fondly.

In the first of them, played in Warsaw in September, Mudryk scored Shakhtar’s equaliser with a powerful, diagonal finish having latched onto a Heorhii Sudakov through-ball with a well-timed, and explosively fast, run in behind Celtic right-back Josip Juranovic.

Then, at Celtic Park a month later, he again made another decisive contribution, scoring another equaliser, this time with a stunning individual effort from outside the box following a counter-attack as Ange Postecoglou’s side were knocked out of the competition.

Mudryk was even better in the 4-1 win over RB Leipzig which came prior to those two games, setting up Shakhtar’s opener after darting inside from the left and outfoxing his marker with a series of stepovers, then finishing off a rapid counter-attack himself before producing another assist with a low cross for striker Lassina Traore.

Mudryk’s main strengths were plain to see in those games – his pace and power when cutting inside from the left to use his stronger right foot; his speed in transition; his clinical finishing ability – and his ability to do it on the Champions League stage only added to his appeal to a growing list of suitors which includes Arsenal.

Chelsea’s lack of firepower has already seen them secure a loan deal for Atletico Madrid’s Joao Felix, who was sent off on his debut against Fulham on Thursday, but Mudryk has been a rumoured target since the start of the window.

The Blues are desperate to improve their attacking output having only scored 21 goals in 18 Premier League games this season.

Part of Mudryk’s appeal is his ability to play on either flank. He generally prefers to operate as an inverted winger on the left-hand side, but he is happy on the right too.

“It’s more comfortable for me when I play on the line where I can show all my potential one against one,” he said when asked about his favoured position in an interview with The Times in September.

“I have more space to move to the front and I can create a lot more chances when I play on the line. There are more people in the middle. But, you know, the middle is also OK for me.

“My inspiration is Cristiano Ronaldo because of what you can do if you work hard and believe in yourself. I like the way Cristiano plays. I see myself like that – a winger.”

That is not to say he might not one day be comfortable playing centrally too – “I need more time to change my position from 11 or 7 to 9, but with time it is possible,” he added to The Times – but he is above all a player who carries the most threat from the flanks.

It remains to be seen what happens next but it looks increasingly likely that Mudryk, although a little-known figure outside of Ukraine only a year ago, has a tantalisingly bright future ahead of him.