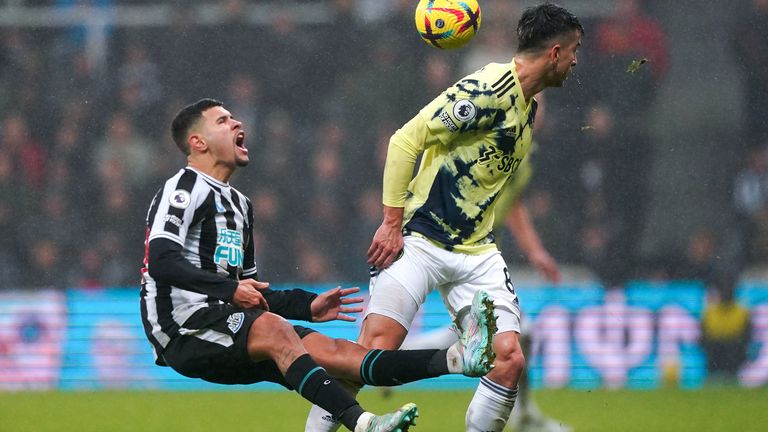 Free highlights and match report as Newcastle unable to capitalise on Man City’s draw with Everton to go second in the Premier League table; Chris Wood, Sean Longstaff and Joelinton among the players to miss chances for the Magpies; Leeds’ best chance saw Rodrigo’s shot saved by Nick Pope

Newcastle’s six-game winning run in the Premier League came to an end on New Year’s Eve as they were held to a 0-0 draw by Leeds, missing the chance to go second in the table heading into 2023.

The Magpies were unable to capitalise after Manchester City also drew with Everton, but remain third in the Premier League on 34 points – two behind Pep Guardiola’s side – as the new year beckons.

The game was played in difficult circumstances as the rain lashed down at St James’ Park and was fiery at times, but a dominant Newcastle were unable to find a way past a stubborn Leeds defence, who kept their first clean sheet in eight league games.

Illan Meslier made some fine saves too, keeping out Chris Wood and Fabian Schar on multiple occasions, while Sean Longstaff and Joelinton were among the players to fire wide as Newcastle racked up 16 shots and an xG of 2.11.

They will perhaps feel aggrieved to have not been awarded a late first-half penalty after Tyler Adams’ clumsy challenge on Schar. Tensions boiled over late on too as Newcastle’s frustrations came to the fore, but Leeds held on for an impressive point.

Jesse Marsch’s side will finish the year in 14th place on 16 points, three above the relegation places.