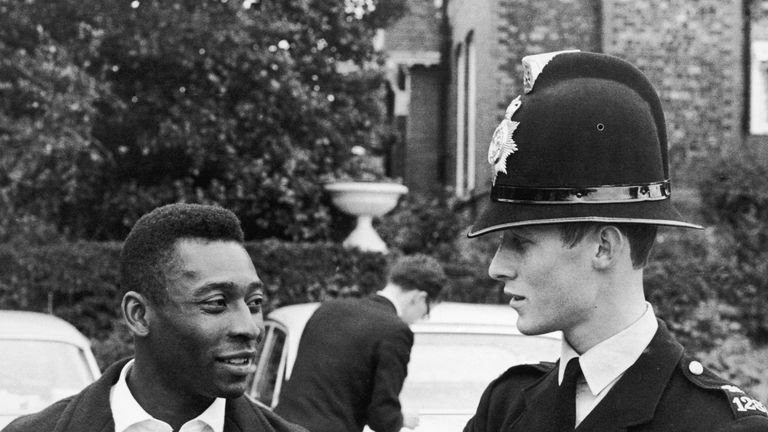 Pele, who is the only player in history to win three World Cups, passed away at the Albert Einstein hospital in Sao Paulo following a battle with cancer; he became an icon of the game after winning the World Cup in 1958 as a 17-year-old, netting twice in the final to defeat hosts Sweden

Brazil football legend Pele, one of the greatest players of all time, has died at the age of 82.

The former striker, who is the only player in history to win three World Cups, passed away at the Albert Einstein hospital in Sao Paulo following a battle with cancer.

A message from Pele’s official Twitter account on Thursday read: “Inspiration and love marked the journey of King Pelé, who peacefully passed away today. Love, love and love, forever.”

Pele, who is Brazil’s joint all-time top scorer with 77 goals in 92 matches, became an icon of the game after winning the World Cup in 1958 as a 17-year-old, netting twice in the final to defeat hosts Sweden.

Injury restricted his contribution to Brazil’s triumph in 1962 in Chile but he was player of the tournament eight years later, as Brazil assembled one of the greatest sides of all time and lifted the Jules Rimet trophy in Mexico thanks to a 4-1 win over Italy in which Pele scored the opening goal.

That goal makes him one of only five players to have scored in two World Cup finals and, thanks to his exploits in 1958, he remains the youngest player to have netted a goal at the tournament.

In total, Pele scored 12 goals in 14 World Cup appearances and also provided 10 assists – the most by any player in the history of the competition, and a reminder that he was much more than a goalscorer.`

It was his spectacular scoring feats, though, that made him a Santos legend at club level.

Pele holds his hometown side’s all-time goal record and helped them to two Copa Libertadores titles and six Brazilian league crowns during a glittering 18-year spell with the club.

Pele, who scored 1,281 goals in 1,363 games for club and country during his career, ended his playing days at New York Cosmos and retired from football in 1977.

After retiring, Pele acted as an ambassador for football. In 2013, he was awarded the FIFA Ballon d’Or Prix d’Honneur in recognition of his career and achievements. In 2020, he was named in the Ballon d’Or Dream Team, a greatest of all-time XI.

Neymar, Brazil’s joint-highest scorer in men’s international football alongside Pele, shared an emotional tribute to his idol following his passing.

“‘Before Pelé, 10, was just a number’,” Neymar, who wears the No 10 for Brazil and also started his career with Santos, wrote in a post on Instagram.

“I’ve read this phrase somewhere, at some point in my life. But this sentence, beautiful, is incomplete.

“I would say before Pelé football was just a sport. Pelé has changed it all. He turned football into art, into entertainment.

“He gave voice to the poor, to the blacks and especially: he gave visibility to Brazil. Soccer and Brazil have raised their status thanks to the King! He’s gone but his magic remains. Pelé is forever.”

Martin Tyler: ‘In the football world Pele is immortal’

Sky Sports football commentator Martin Tyler says Pele deserves to be remembered as the best player to have played the game.

He said: “For me he is the greatest player of all time. One of my early jobs outside of television was to put the English voice on a VHS, as it was in those days, of his Brazil career and his 1,000 goals.

“If I had any doubts about how good he was, that video proved it. It was a privilege to do that and pay tribute to a man who could do so much more than score goals.

“He will always be remembered for the ability to score amazing goals in terrible conditions on bumpy pitches, when players had more license to use all means to stop him. He was irresistible.

“Undoubtedly for me he will always be the greatest and in the football world he is immortal.”

‘One of the greatest’: Sport pays tribute to Pele