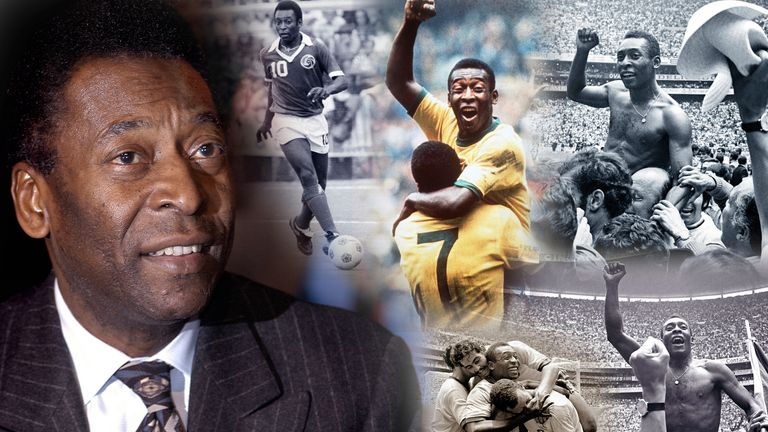 Tributes for Pele poured in from around the world in after his death at the age of 82; Cristiano Ronaldo, Kylian Mbappe and Lionel Messi among football stars to honour the Brazil legend; Christ the Redeemer and the Wembley arch were both lit up in the colours of Brazil

Tributes have poured in for Brazil legend Pele

Pele, the Brazil football legend, died on Thursday at the Albert Einstein hospital in Sao Paulo following a battle with cancer and reaction poured in around the world to remember the only player to have won the World Cup three times.

Neymar, who is Brazil’s joint-highest scorer in men’s international football alongside Pele on 77 goals, posted an emotional message following the death of his idol.

“He’s gone but his magic remains. Pelé is forever,” Neymar wrote on Instagram.

“I would say before Pelé football was just a sport. Pelé has changed it all. He turned football into art, into entertainment.”

Christ the Redeemer, the statue of Jesus Christ in Rio de Janeiro, and the Wembley arch were both lit up in the colours of Brazil on Thursday night to honour Pele.

Ronaldo: Goodbye to the eternal King

Cristiano Ronaldo said Pele’s “memory will live forever in each and every one of us football lovers”.

The former Manchester United and Real Madrid forward wrote on Instagram: “A mere ‘goodbye’ to the eternal King Pelé will never be enough to express the pain that the entire football world is currently embracing.

“An inspiration to so many millions, a reference yesterday, today and forever. The love you always showed me was reciprocated in every moment we shared even from distance.

“He will never be forgotten and his memory will live forever in each and every one of us football lovers. Rest in peace King Pelé.”

Mbappe posted an image of himself and Pele with the words: “The king of football has left us but his legacy will never be forgotten. RIP KING.”

Less than two weeks ago Pele congratulated Messi on winning the World Cup with Argentina in a heartfelt post on Instagram, while offering his consolation to France forward Mbappe after he fell short despite scoring a hat-trick.

“Today, football continues to tell its story, as always, in an enthralling way,” Pele wrote.

“Messi winning his first World Cup, as his trajectory deserved. My dear friend, Mbappé, scoring four goals in a final. What a gift it was to watch this spectacle to the future of our sport.”

Ronaldo: A privilege to come after you

Former Real Madrid, Barcelona and Inter Milan striker Ronaldo, a World Cup winner with Brazil in 2002, says Pele leaves us as “the greatest of all time”.

“What a privilege to come after you, my friend,” he wrote on social media.

“Your talent is a school every player should go through. His legacy transcends generations. And that’s how you’ll live on. Today and always, we will celebrate you. Thank you, Pele. Rest in peace.”

He added: “Where Pelé arrived, he stayed. Never having left the top, he leaves us today. The king of football – one. The greatest of all time.”

Hurst: Pele remains the greatest of all time

Sir Geoff Hurst, who was the first player to score a hat-trick in a World Cup final when England lifted the trophy in 1966, says Pele “remains the greatest of all time”.

Hurst was on the losing side when England played Pele’s Brazil in the group stages at the 1970 World Cup in Mexico and that encounter has had a lasting impact on the former West Ham striker.

“For me Pele remains the greatest of all time and I was proud to be on the pitch with him. RIP Pele and thank you.”

FIFA president Gianni Infantino described Pele’s “magnetic presence” as he praised the Brazil legend’s legacy on football around the world.

“When you were with him, the rest of the world stopped,” said Infantino.

“His life is about more than football. He changed perceptions for the better in Brazil, in South America and across the world. His legacy is impossible to summarise in words.

“Today, we all mourn the loss of the physical presence of our dear Pele, but he achieved immortality a long time ago and therefore he will be with us for eternity.”

Martin Tyler: ‘In the football world Pele is immortal’

Sky Sports football commentator Martin Tyler says Pele deserves to be remembered as the best player to have played the game.

He said: “For me he is the greatest player of all time. One of my early jobs outside of television was to put the English voice on a VHS, as it was in those days, of his Brazil career and his 1,000 goals.

“If I had any doubts about how good he was, that video proved it. It was a privilege to do that and pay tribute to a man who could do so much more than score goals.

“He will always be remembered for the ability to score amazing goals in terrible conditions on bumpy pitches, when players had more license to use all means to stop him. He was irresistible.

“Undoubtedly for me he will always be the greatest and in the football world he is immortal.”