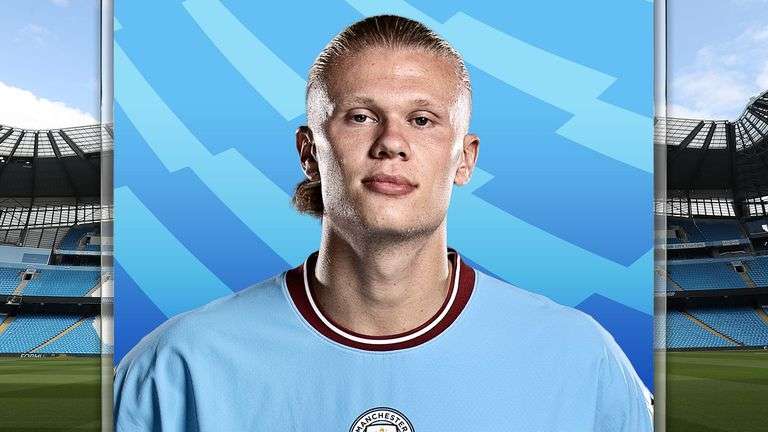 Pep Guardiola warns more is still to come from Erling Haaland; Norwegian named Premier League Player of the Month for August after scoring twice on league debut against West Ham, netting at Newcastle, and hitting consecutive hat-tricks against Crystal Palace and Nottingham Forest

Haaland has made a stunning start to his Manchester City career, scoring 13 goals in his first nine appearances for the Premier League champions.

The Norwegian’s brilliant late winner against Borussia Dortmund in midweek led to Guardiola comparing him with Johan Cryuff and the City manager believes his quality will only improve.

Haaland scored 86 goals in 89 games for Dortmund and has continued at City where he left off in Germany.

Guardiola said: “He’s a perfect person to manage. He’s a nice guy and this is the most important thing.

“The quality he has he had before he came here, he has continued to do what he has done. We didn’t add many things.”

Manchester City forward Haaland has been named the Premier League’s Player of the Month for August after scoring nine goals in five games in a brilliant start to his career in England.

The 22-year-old bagged a double on his league debut against West Ham and scored once at Newcastle United before hitting consecutive hat-tricks against Crystal Palace and Nottingham Forest as City won four of their opening five games.

The Norwegian beat competition from Arsenal duo Gabriel Jesus and Martin Odegaard as well as Fulham striker Aleksandar Mitrovic among others to win the award.

According to Opta, only former Liverpool striker Luis Suarez has scored more goals in a single month in the Premier League, with 10 goals in December 2013.

“I am delighted to win this award for the first time,” Haaland said. “It was an incredible start of the season for the team and I am grateful to everyone who voted.

“We all wanted to hit the ground running this season, so winning four games out of five was a great start for us in what is the most challenging competition in the world.

“I am happy to have played my part by scoring goals. Hopefully, I can continue to support the team… and carry on our strong start to the season.”

Erling Haaland would finish the season on 102 goals in all club competitions if he sustains his strike-rate, game time and reaches all finals – but how is the Norwegian achieving his record-breaking returns?

Could Haaland smash the all-time Premier League Golden Boot goal record of 32 goals in a 38-game season set by Mohamed Salah in 2018? How does Haaland score his goals and has he netted more than expected? Have City adapted their style to suit Haaland?

Haaland has made fools of anyone who dared question whether he would need time to settle into the Premier League, with a stunning start to the season.

The Norway striker has bagged 10 goals in his six games and will be looking to add to that tally against Wolves on Saturday. Only Bournemouth have failed to stop Haaland scoring in the league this season, so Wolves will have their work cut out.

Although Bruno Lage’s men have conceded fewer goals than any other side in the league so far – four – their mettle will be severely tested by this City side, who have already bagged 20.