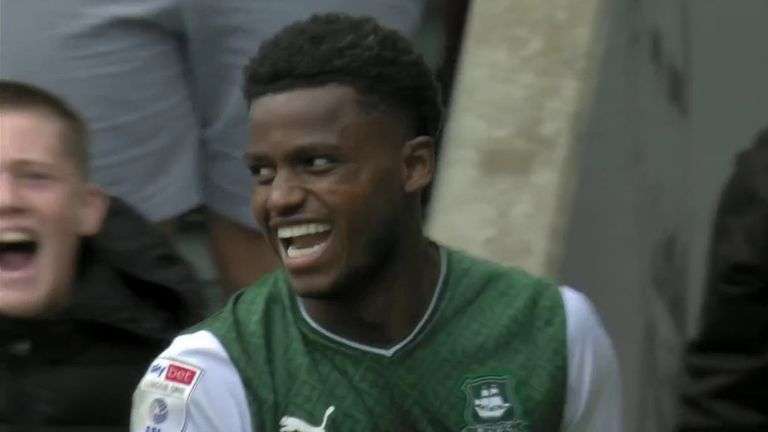 Two goals in six second-half minutes saw Plymouth come from behind to beat Ipswich 2-1 and leapfrog them at the Sky Bet League One summit.

The first goal of a game that was played at the highest intensity from the off came six minutes before the break, when former Argyle striker Freddie Ladapo, with a stroke of luck, looped a shot over Michael Cooper (39).

But the hosts got their act together midway through the second half, as Bali Mumba fired in the equaliser from 20 yards (69), before Morgan Whittaker thumped in what proved to be the winner from the edge of the box (75).

In the dying seconds, Ipswich goalkeeper Christian Walton came forward to meet a corner, with his header cannoning off the crossbar, but an equaliser could not be found.

The result ends the Tractor Boys’ nine-game unbeaten start to the 2022/23 season and sees them drop to second, a point behind the new leaders.

How Plymouth profited from an inspired comeback

From the first whistle, it was clear this was going to be a full-blooded battle between two of the division’s heavyweights.

Plymouth threatened first, when Danny Mayor broke free and laid the ball across the six-yard box where it was cleared, before James Wilson headed over, Adam Randell fired across the face of goal and Whittaker’s fizzing drive was batted away by former Argyle season ticket holder Walton.

It took Ipswich some time to settle into their rhythm, and when they did, it was Ladapo – who scored 19 goals in all competitions for the hosts during the 2018/19 season – who looked the most likely to score. He drew a save from Michael Cooper, had a shot blocked – and then scored the goal that separated the sides at the break.

The ball broke to him through the middle and he took it out to the left-hand side of the box, before hitting a shot that took a nick off Dan Scarr, ricocheted back onto his own leg, looped up and dropped in the net.

Within 10 minutes of the second half, Whittaker collected Mayor’s pass on the turn and rolled a shot inches past the post, but that seemed to spur on the Home Park faithful, who were rewarded for their patience with 20 minutes to play when Mumba rifled in a shot from 20 yards out.

Walton then made a last-ditch save to tip a Whittaker shot around the post, but he was beaten at the second attempt two minutes later, when the visitors were caught tinkering at the back, with Whittaker on hand to hit a dipping shot home via a slight deflection.

Plymouth protected their lead admirably and looked capable of seeing the game out successfully, but the drama did not stop there. Kayden Jackson first thumped a shot into the side netting, leaving hearts in mouths from all sides of the stadium, before Walton came forward, met a corner and headed the ball agonisingly onto the crossbar.

“I have changed my mind several times, but I’ve fallen on Morgan Whittaker. He has been really, really influential, and particularly in the second half, when the chips were down, he has stepped up to the plate and caused Ipswich all kinds of problems.”

Both teams are back in action at 3pm on Saturday October 1. Plymouth travel to Adams Park to face Wycombe, while Ipswich host Portsmouth in a top-of-the-table clash at Portman Road.