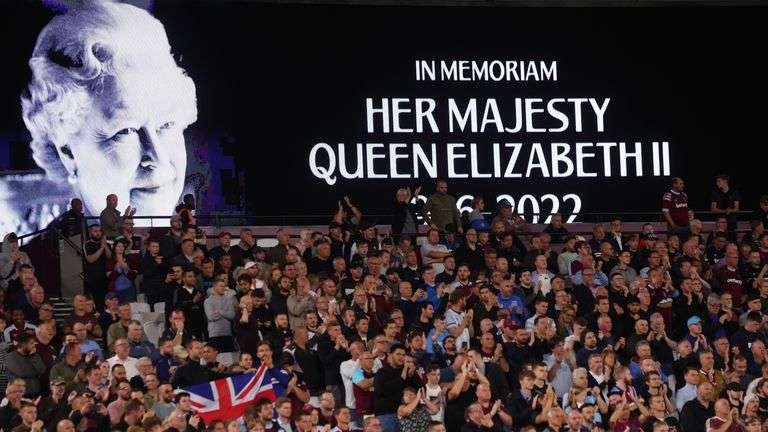 Premier League, Championship, League One, League Two, Scottish and non-League called off this weekend following the death of The Queen; start of WSL season also delayed; Horse racing cancelled on Friday and Saturday with St Leger moved to Sunday

All English and Scottish football has been postponed this weekend following the Queen’s death on Thursday.

The Premier League, Championship, League One and League Two have all been postponed, as well as the start of the new Women’s Super League season, and all non-League and grassroots fixtures.

The Scottish FA also announced that the SPFL, SWPL and Highland & Lowland Leagues have agreed that professional football matches will be postponed.

The British Boxing Board of Control has also postponed Saturday’s fight between Claressa Shields and Savannah Marshall for the undisputed middleweight world championship. The fight will now go ahead on October 15.

The postponements follow Queen Elizabeth II’s passing on Thursday, with the country now in a state of national mourning.

Which sports are still on this weekend?

Following the cancellation of Friday’s cricket fixtures as a mark of respect on announcement of her death, the England and Wales Cricket Board has confirmed that play will resume from Saturday including international, domestic, and recreational fixtures.

Golf’s BMW PGA Championship will restart on Saturday morning following the immediate suspension of play on Thursday evening and the complete cancellation of all day’s play on Friday. The event will now be contested over 54 holes with the intention to finish on Sunday as scheduled.

Premiership Rugby confirmed fixtures on Saturday and Sunday will take place. Friday’s scheduled fixture between Bristol Bears and Bath Rugby will instead take place on Saturday at 5.30pm, while Friday’s other game between Sale Sharks vs Northampton Saints has been changed to 3pm on Sunday.

Saturday’s Super League match between Huddersfield and Salford will be played after confirmation that Friday night’s game between Catalans and Leeds would also go ahead as planned.

The British Horse Racing Authority has confirmed that all British horse racing has been cancelled on Friday and Saturday. An additional day of racing at Doncaster will be scheduled for Sunday to ensure that the Cazoo St Leger and other important races lost as result of the cancellations can take place.

“To honour her extraordinary life and contribution to the nation, and as a mark of respect, this weekend’s Premier League match round will be postponed, including Monday evening’s game.”

Richard Masters, Premier League Chief Executive, said: “We and our clubs would like to pay tribute to Her Majesty’s long and unwavering service to our country.

“As our longest-serving monarch, she has been an inspiration and leaves behind an incredible legacy following a life of dedication.

“This is a tremendously sad time for not just the nation but also for the millions of people around the world who admired her, and we join together with all those in mourning her passing.”

“Further updates regarding Premier League fixtures during the period of mourning will be provided in due course.”

In their statement, the EFL said: “Further to discussions on Friday morning it has been determined that all EFL fixtures from 9-10 September will be postponed as a mark of respect by the National Sport to the passing of HRH Queen Elizabeth II.

“This is aligned with the approach that the Premier League and the FA will take with their competitions this weekend. Further information, in respect of how football, clubs and their supporters will commemorate Her Majesty’s reign, will be confirmed at an appropriate point.

“Details regarding rearranged games will be announced in due course.”

York City vs Dagenham and Redbridge

Kelty Hearts vs Queen Of The South