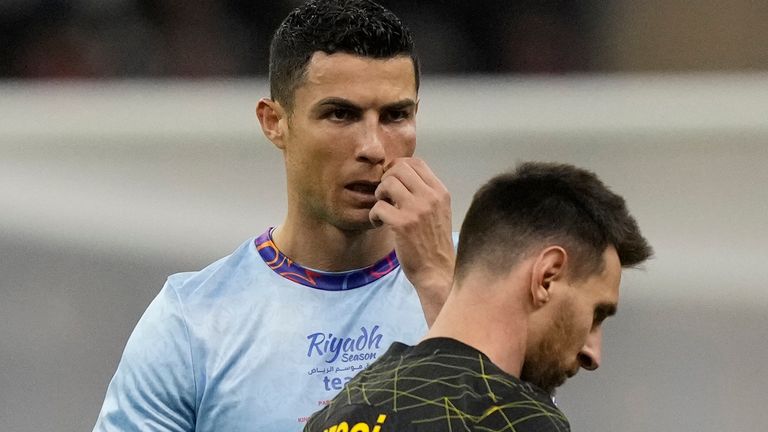 Ronaldo has had to wait for his first appearance since joining Al Nassr due to a FA suspension during his Manchester United days.

But his first game in Saudi Arabia was not in Al Nassr colours as he joined a team of all-stars from Riyadh’s two big clubs, Al Nassr and Al Hilal, to take on Paris Saint-Germain.

Messi and Ronaldo shared the pitch for the first time since the latter’s Juventus side beat Barcelona 3-0 in the Champions League group stages in October 2020.

Messi and Ronaldo had previously met 36 times, with the PSG player winning 16 matches compared to just 11 victories for Ronaldo.

Ronaldo, who left Manchester United in November, was named man of the match as the sides shared nine goals and PSG ran out 5-4 winners in the exhibition match at the King Fahd Stadium in Riyadh.

Argentina World Cup-winner Messi opened the scoring from Neymar’s pass with only two minutes on the clock.

The All Stars, made up of players from Al Hilal and Ronaldo’s new club Al Nassr, equalised when the Portugal captain crashed in a penalty after he was fouled by PSG keeper Keylor Navas.

Despite it only being a friendly PSG were reduced to 10 men when Juan Bernat saw red for a foul.

The French side went ahead again through a goal from centre-half Marquinhos at a corner.

Neymar then had a weak penalty saved by Mohammed al Owais after he was tripped in the area, and Ronaldo made it 2-2 before half-time when he converted the rebound after his header came back off a post.

There was to be no hat-trick for Ronaldo with the 37-year-old withdrawn after an hour.

A Kylian Mbappe penalty and a goal from Hugo Ekitike put the visitors two ahead before Anderson Talisca pulled one back.

What was the point of this match?

Ronaldo and Messi were both on target

“The point of the game was for Saudi Arabia to show off Cristiano Ronaldo. Watching some of the pictures from Riyadh this evening, there were quite a lot of empty seats.

“You had to wonder why this Saudi Arabian businessman Mushref Al-Ghamdi paid £2.2m at an auction for his VIP ticket. There looked to be hundreds if not thousands of empty seats there.

“If you happened to have had a season ticket at the King Fahd International Stadium, you’ve really been spoilt this week as it has hosted Barcelona vs Real Madrid in the Spanish Super Cup as well as Inter Milan vs AC Milan in the Italian Super Cup.

Grimacing in pain from his bruised cheekbone, Ronaldo steadied himself before scoring from the penalty spot for his first goal in Saudi Arabia against a Paris Saint-Germain team featuring his old foe Messi.

Messi had already scored early in Thursday’s exhibition game when Ronaldo was flattened boxing-match style by PSG goalkeeper Navas after about 30 minutes in Riyadh, the city which gained sporting prominence for hosting a world heavyweight championship boxing bout in 2019.

It wasn’t Anthony Joshua but Navas who caught Ronaldo flush in the face with his forearm under a high ball. Both went down like felled boxers.

Ronaldo held his head, got back up, yawned as if to test his sore left cheek, and sent his former Real Madrid team-mate Navas the wrong way.

By the end of the first half Ronaldo’s cheekbone was bright-apple red but he was all smiles after netting his second goal, smashing in a rebound when his header came back off the post. Poking his tongue out, Ronaldo wheeled away in delight and was mobbed by team-mates at the corner flag.

When Mbappe checked on the state of Ronaldo’s cheek just before the second half, Ronaldo milked the attention from France’s World Cup star and pointed to the red mark.

Mbappe smiled at him as if to say ‘you’ll be fine’ and Ronaldo raised his arm in triumph like a heavyweight champion in front of 68,000 fans at King Fahd International Stadium.

Although his team lost, Ronaldo edged perhaps the final instalment of Ronaldo vs Messi, as one of the greatest rivalries in football history resumed in an unfamiliar location.

The Portuguese came off to a huge ovation just after the hour mark followed by Mbappe and Argentina’s World Cup-winning star Messi, who was warmly hugged by countryman Marcelo Gallardo, coaching the combined Saudi Arabian team.