Raheem Sterling misses out for England with ‘family matter’ 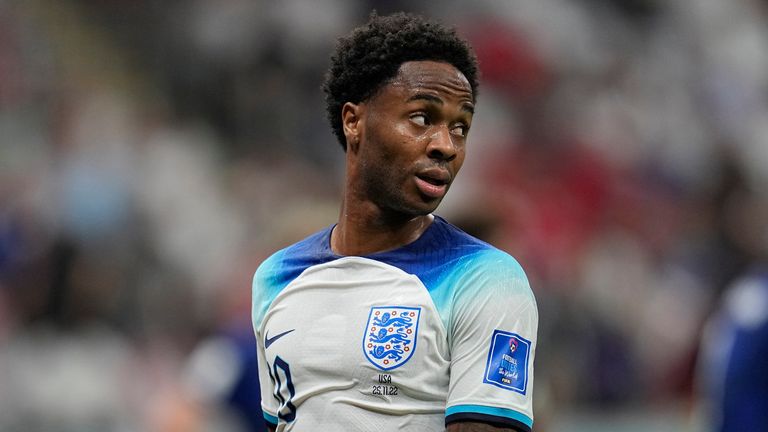 England manager Gareth Southgate on Raheem Sterling’s absence from England’s squad to face Senegal at the World Cup: “I’ve had quite a bit of time with Raheem this morning, but I’ve had to pass that onto other people to help him with that.”

Gareth Southgate would not put a date on Raheem Sterling’s return after the winger was ruled out of England’s last-16 game with Senegal for a “family matter”.

England announced on social media earlier on Sunday that the Chelsea forward would be absent from the knock-out clash, having started two of the Three Lions’ three games at the World Cup so far.

“I’ve had quite a bit of time with Raheem this morning, but I’ve had to pass that onto other people to help him with that,” Southgate told ITV ahead of kick-off.

When asked if Sterling would return should England progress to the latter stages in Qatar, he added: “He’s going to go and deal with that matter, and then we’ll have to take it from there.”

Bukayo Saka returned to the England side in Southgate’s only change from the win over Wales, replacing Marcus Rashford.

How Southgate picks his teams

“A lot of Gareth Southgate’s thinking when it comes to his starting XIs is based on what he sees in training.

“But a lot of it is based on things we don’t see. For instance, the FA have members of their staff here at all games which feature countries that England could come up against, so FA staff will have been watching Senegal very closely.

“After they watch Senegal, they go back to Gareth Southgate and his coaching team, they do a presentation on the strengths and weaknesses.

“Also bear in mind that Southgate will be having data and information that we don’t have about how his players are performing in games and also in training sessions.

“So with all that information with players in his own squad and also England’s opponents, he picks his side.

“It’s not a case that he listens to clamour, the people in the media or fans who want Foden, or Saka or they see him and he’s played well in the last game, so he deserves to be in the starting XI – that’s not the way it works.

“And that’s very clear because if you look at this starting XI, some people will say ‘Rashford was the man of the match against Wales, he played so well, how can you drop him?’

“But don’t look at it that way. It’s not a case of Rashford being dropped, I just think for this particular game, Southgate has all the information that we don’t have and he believes that his strongest two wide players against this Senegal side are Saka and Foden.

“If I was Rashford or Grealish, I would not be too disheartened because I’m sure one or both of them will feature in this game.”

“What Southgate has got with his four wide forwards – Rashford and Foden playing the last game with Saka and Sterling playing the two games before – I don’t think there’s a huge difference with what he goes with.

“The fact he can chop and change shows how much strength in depth he’s got in those wide areas. I just felt that Foden and Rashford were the right ones to go with, just because they were so confident in the last game, but then again you go to the first game and you think of how good Sterling and Saka were in that Iran game.

“I’m not shocked or surprised with what he does in the wide areas because we’ve got so much quality there. It’s the one area in the squad where there is real competition for places.”

“There’s no doubt Saka has been on brilliant form for Arsenal this season. Saka got the nod against Iran and was player of the match. He brought an energy to that attack, but also with a defensive midnset, and I think that’s probably what has got him the nod today.

“Southgate knows he can rely on Saka to get back if there are any breaks, he has the pace and energy to make sure that happens, because this is going to be an athletic Senegal side.