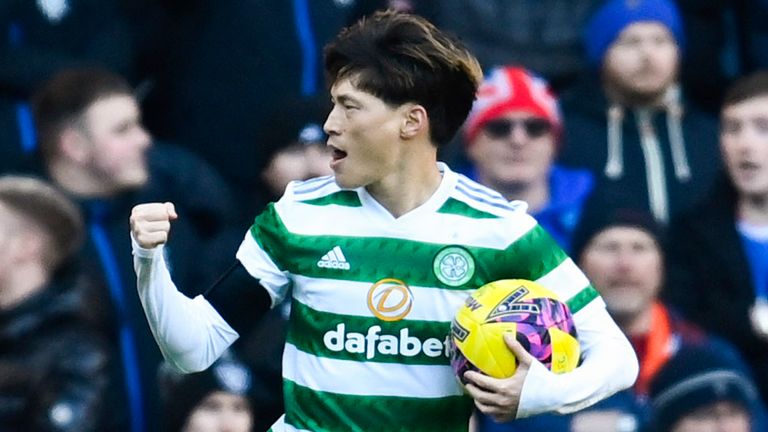 Match report and highlights as the second Old Firm clash of the season ends 2-2; Daizen Maeda opened the scoring for Celtic after an Alfredo Morelos error; Ryan Kent equalised in style; James Tavernier fired Rangers ahead from the penalty spot; Kyogo fired in late on to secure a draw

Kyogo Furuhashi’s late strike saw Celtic snatch a 2-2 draw with Rangers to maintain their nine-point lead at the top of the Scottish Premiership.

Ryan Kent brought Rangers level just two minutes after the break and James Tavernier converted a penalty in the 53rd minute after Carl Starfelt fouled Fashion Sakala to put the Ibrox side ahead.

Beale made two changes as he looked to make it five straight wins since taking charge at Rangers with Glen Kamara and Fashion Salaka coming in for Alex Lowry and Ryan Jack.

Rangers started with intent and Kent forced Joe Hart into a save inside the opening minute, but the home fans were silenced just minutes later as Celtic took the lead.

Morelos played a slack pass in his own half and Maeda nipped in to pick up the ball and fire into the empty net.

The visitors then continued to push as Madea then delivered a dangerous low cross into the box but there was no one waiting to take advantage before Allan McGregor reacted to push Callum McGregor’s effort past the post.

Celtic were forced into an early change as defender Greg Taylor, an injury doubt ahead of the match, was replaced by Josip Juranovic.

Hart almost gifted Rangers an equaliser in the 27th minute. He took too long on the ball and Morelos cut the ball back to Kent, but the Celtic goalkeeper recovered to tip his shot onto the post.

As the Ibrox faithful grew increasingly frustrated, Morelos headed well over from Tavernier’s corner before curling a shot past the post.

The Colombia international then sent another header just wide as the hosts remained behind at the break.

They were level though just two minutes after the restart as Kent fired into the top corner after being picked out by Sakala.

Referee John Beaton pointed to the penalty spot in the 52nd minute after Carl Starfelt caught Sakala with a sliding tackle.

Up stepped Tavernier who made no mistake and fired Rangers ahead with his 100th career goal.

The match had swung towards the Light Blues and on the hour mark Postecoglou replaced Forrest and Matt O’Riley with Liel Abada and Aaron Mooy, and Celtic responded.

Ibrox held its breath as Beaton checked for a possible handball in the Rangers penalty area after a Starfelt shot hit Goldson, but play continued as it did following a second possible penalty claim for Celtic when again the ball came
off Goldson minutes later.

The game stretched in the increasingly tense final stages.

But there was more drama to come and in the 88th minute, Celtic snatched an equaliser.

Substitutes Mooy, Jota and Georgios Giakoumakis were all involved in an attack inside the Gers box and when the ball fell to Furuhashi, the Japan striker lifted his shot high past McGregor for a share of the spoils as seven minutes of
added time could not provide a winner.

Beale: We competed with Celtic

“The two goals [conceded] from us are poor goals to give away, certainly early in the game. We actually started well and gave away a goal. It then took us ten to 15 minutes to find ourselves again.

“I thought we did, I didn’t really want the half-time whistle. We had two big chances with Alfredo from headers, Ryan Kent hits the post and you’re thinking at half-time that we need to show a little bit more belief because I didn’t think there was much in the game other than that.

“In the second half, we showed that. We get ourselves 2-1 up and we controlled the game, they’ve not been near Allan. We have a big chance to go 3-1 up and we don’t take it.

“There were certainly more answers and I’ve given them some things in there that we need to do moving forward. We’ve certainly got players in our squad that will come back and help, we’ll get fitter and stronger as we go.

“The big thing for us is we’ve only been back together for a few weeks and we’re already at a level where we can compete with the team we need to compete with.

“Now, we need to show consistency in all the other games. We’re no further away than what we were four or five weeks ago. We’d like to be two points closer, but there’s 18 games to go and we need to keep improving here.”

“It was a great game of football. All eyes are on this game, not just in Scotland, but around the world. I thought both teams were at it today, it was a real proper derby. It was a cracking game.

“We started really well and then we just lost control, mainly self-inflicted because of our passing. We made mistakes in areas of our passing that we don’t usually do and it allowed them into it and they got a bit of momentum, particularly with the crowd behind them.

“At the start of the second half, they took a football hold for 15 or 20 minutes. Again, a great spirit shown by the lads.

“It’s very easy on a day like this to resign yourself to a failure, but we haven’t done that all year or last year and we found a way.

“It’s a difficult place to come to. They threw everything at us, they knew how important the game was in the context of the league. For the most part, I thought we handled it OK.

“They’re human beings, not robots. It’s a big occasion, big game and I thought we tightened up in areas where our football is a lot more free-flowing and we didn’t do that today.”

Rangers go to Dundee United in the Scottish Premiership on Sunday in a 4pm kick-of. Michael Beale’s side then face Aberdeen in the Scottish League Cup semi-final at Hampden Park on January 15.

Celtic’s next Scottish Premiership game is at home against Kilmarnock in a 3pm kick-off on Saturday. The Hoops then face the same opposition a week later in the Scottish League Cup semi-final at Hampden Park on January 14.